THE Alliance carriers -- Hapag-Lloyd, Yang Ming, and Ocean Express Network (ONE) -- have been relocating their trans-Atlantic operations from Bremerhaven to Hamburg. The four weekly services involved -- AL1, AL2, AL3, and AL4 -- now connect northern Europe with the US East Coast and the US Gulf.

The AL4 service effectively replaced the AX2 service that was part of the former G6 Alliance, which included Hapag-Lloyd. The new service added Mobile to the previous service’s rotation, which included the Gulf ports of Altamira and Veracruz in Mexico, and Houston and Mobile in the US. Mobile officials had been seeking a North Europe service to join an existing one operated by 2M Alliance partners Maersk Line and Mediterranean Shipping Co., and to balance the port’s expanding Asian business.

US Offshore Wind: Where Is the Market Heading?
Learn how IFP Corp uses technology to improve operational efficiency and improve margins
END_OF_DOCUMENT_TOKEN_TO_BE_REPLACED

The US-China Trade War: Where Do We Go From Here?
END_OF_DOCUMENT_TOKEN_TO_BE_REPLACED 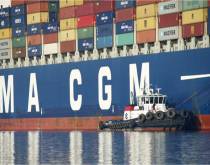 09 Jan 2020
The first of the global container carrier alliances has announced its 2020 schedule, with the other two groupings due to reveal their networks soon.
MORE »

Blank sailings mount on slumping Asia-Europe trade
15 Oct 2019
The number of blanked sailings is growing on the Asia-Europe trades as carriers sit becalmed in the slack season with no clear idea of whether to expect a pre-Chinese New Year rush.

ONE launch hits ‘teething’ problems for bookings
12 Apr 2018
The April 1 launch of new carrier Ocean Network Express is experiencing booking delays in some jurisdictions as cargo from three carriers migrates to the new network.