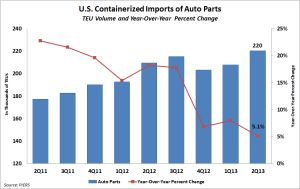 Containers of auto parts imported through U.S. ports reached 220,366 20-foot containers in the second quarter of 2013, their highest volume since the JOC began collecting this data in January 2007. Imports were up year-over-year for the 15th straight quarter.

Auto imports rose 5.1 percent from the 209,644 TEUs reported in the second quarter of 2012, according to preliminary data from PIERS, a JOC sister company.  Despite the high volume, the rate of growth continues to slow, with increases in the single digits for the past three quarters. The previous 11 quarters had seen double digit-growth. 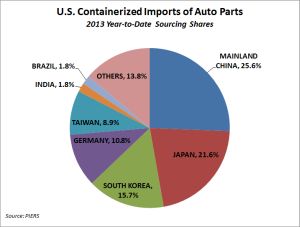 Mainland China retained the top spot in the source countries rankings in 2013 year-to-date, with its market share remaining flat year-over-year at 25.6 percent. Other top countries of origin for U.S. auto parts imports were Japan, at 21.6 percent, down 0.2 percentage point; South Korea, 15.7 percent, up 1.9 percentage points; and Germany, 10.8 percent, down 0.5 percentage point. Nine Japan-based auto parts companies (as well as two executives) have agreed to plead guilty to price-fixing with regard to auto parts sold to U.S. car makers, including U.S. subsidiaries of Japanese car manufacturers, the U.S. Department of Justice announced on Sept. 26.

The volume of auto parts imported from South Korea soared in the first half of 2013. Imports from South Korea jumped 21 percent to 67,104 TEUs from 55,308 in the same period of 2012. Meanwhile, auto part imports from Brazil dropped 20 percent to 7,252 TEUs from 9,041 TEUs last year. This helped India take over Brazil’s spot as the sixth top source, dropping Brazil to seventh.