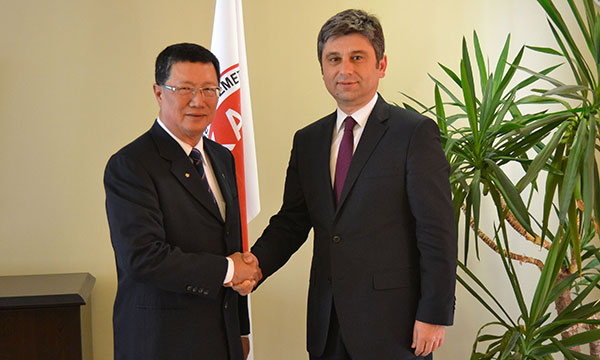 Mr. Lim said; “The world is giving attention to Turkey with its performance of economy and logistics. The world is talking about you.”

Mr. Stanley Lim: “A different continent is choosen for FIATA World Congress every year. Turkey with its great potential for logistics and transportation is connecting the world to the Black Sea, the Caucasus and the Middle East via Istanbul. Istanbul is a fabolous city presenting significant opportunities with its ports facilities, developing multimodal systems and numerous connections between ports and railways. With its extensive hinterland Istanbul is also one of the easiest access gateways to Africa for both the EU countires and the Caucasus. The FIATA World Congress will enable Turkey to announce its noteworthy economical dynamism and growth, logistical opportunities and investments. We as FIATA expect over 1200 attendances in Istanbul in 2014 to further develop global logistics networking. Sure to be this is pivotal for the Turkish logistics sector.”

“OUR TARGET IS TO BREAK THE RECORD OF DUBAI.”

UTIKAD President Mr. Turgut Erkeskin said: “UTIKAD first hosted the FIATA World Congress in 2002. It is remembered as one of the most successful organizations of the congress history. This time our target is to break the record of Dubai with the highest number of attendances counting over 1500 participants.”

Mr. Erkeskin: “Investments in logistics, regeneration of the highway infrastructure and dynamic improvements on railways are tremendous. We are also building new airports, bridges and ports while the whole world pays attention to all these developments in Turkey. With its young population Turkey also offers a huge capacity for both production and consumption. FIATA World Congress 2014 is a great chance to show Turkey’s capacity in logistics to the world.”

UTIKAD (Association of International Forwarding and Logistics Service Providers), established in 1986, represents road, air, sea, rail, combined transport and logistics service providers companies in Turkey and at international arena as the most important and active association in Turkish Logistics Industry.

UTIKAD is the national representative of Turkey in FIATA (International Federation of Freight Forwarders Association) which is the largest non-governmental organization in the field of transportation and logistics in the world. Separately, UTİKAD is an observer member of European Association For Forwarding, Transport, Logistics and Customs Services (CLECAT), and founder member of ECO Logistics Providers Associations Federation (ECOLPAF).