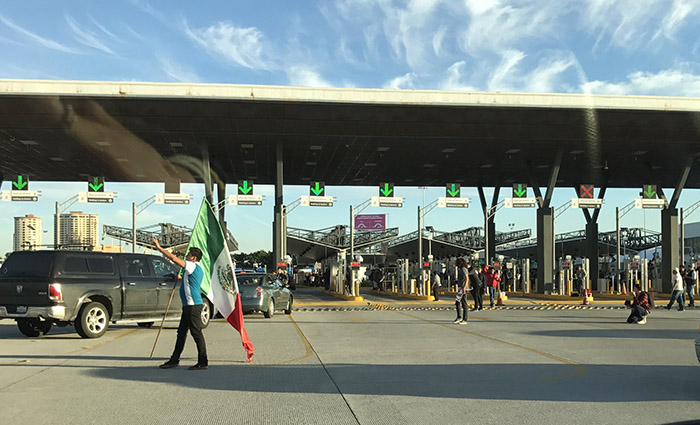 The cost of cross-border shipping between the US and Mexico is set to rise as Mexican trucking operators react to a 13 to 20 percent increase in fuel costs imposed this week.

New fuel prices set by Mexico’s federal government Jan. 1 sparked massive protests and blockades that shut down highways and even temporarily affected the Port of Veracruz.

The protests led to at least four deaths, hundreds of arrests and the looting of hundreds of gas stations and stores across Mexico this week, and they continued Friday.

Freight is flowing across the US-Mexico border with only intermittent interruptions, said Ben Enriquez, senior vice president of transportation services Mexico at logistics provider Transplace. The El Paso-Juarez bridge was blocked for a short time this week, he said. “That affected multiple customers that have business in Chihuahua state or across the border from Juarez in the US,” he said.

“There were customers that couldn’t get their freight out,” he said. “Then gas stations began to run out of fuel. The government had to bring police officers in to clear the highway.”

Even without protests or disruptions, however, “transportation costs are going to go up for everybody,” Enriquez said, including freight shippers, as the price of gasoline and diesel fuel in Mexico rises in stages throughout the year. “Mexican carriers are going to start implementing fuel surcharges on top of their rates or begin increasing rates continuously,” he said Friday.

Transplace estimates those fuel surcharges will push up trucking costs in Mexico by 8 to 14 percent, depending on the region of the country, over the next few months. “That will impact any shippers moving freight in and out of Mexico,” Enriquez said. “I would like to emphasize that I don’t see any disruption in the flow of freight for now,” he said, but costs will go up.

Jordan Dewart, president of Yusen Logistics Mexico, said trucking costs could go up even higher. Diesel prices were raised 16 percent, he said. "We have put our customers on notice to expect rate increases, over time, in the same amount," he said in an e-mail. The fact that many rates are in US dollars will alleviate some of the sting, as the value of the peso against the US dollar is dropping, he said.

The government-ordered price increases actually are part of Mexico’s plan to deregulate its fuel markets and align its fuel prices with global market prices. State subsidies have kept Mexican fuel prices low. The Mexican government is setting “maximum” fuel prices for 90 regions that will differ depending on factors that include logistics and distribution costs.

The first prices were put in place Jan. 1 and will stay in effect through Feb. 3. There will be two weekly updates in early February. After Feb. 18, prices will be adjusted on a daily basis.

Full liberalization of prices will occur in stages in various regions throughout 2017. The government prices will be lifted once pricing in those regions has been turned over to market forces, a transition that will be complete by the end of the year.

“We don’t know where we’ll be (in terms of fuel prices) at the end of the year,” Enriquez said.

Under the fuel prices set this month, the average maximum price for diesel is 17.05 Mexican pesos or about $3.22 per gallon, according to Transplace. Enriquez doesn’t expect the Mexican government to back down from its plans, despite the widespread protests.

“We expect things will calm down in the next few weeks, but there are set days for fuel price increases, it’s public knowledge,” Enriquez said. “This is the first time there are so many social disruptions. You’ve seen people sacking stores. I don’t think we’ve seen that in the past.”

Mexican protesters likely have more than higher fuel prices on their minds. The price hikes come as Mexico’s currency weakens against the US dollar, making American goods more expensive. Many Mexicans are dissatisfied with President Enrique Peña Nieto’s handling of the country’s long-running drug war, the economy and relations with US President-Elect Donald Trump.

Without doubt, higher fuel prices will bite deeply into the disposable income of many Mexicans.

“In large cities like Mexico City where you spend two or three hours of your day in your car, you spend a lot on gas,” Enriquez said. “This will affect everyone’s pocket, absolutely.”

Among the likely long-term effects is a widening of the imbalance between northbound and southbound cross-border freight. That could make it even more difficult, and costly, to find trailers and intermodal containers to ship exports to the US, Enriquez said.