Can Chicago Prevent Next Rail Meltdown?

Can Chicago Prevent Next Rail Meltdown? 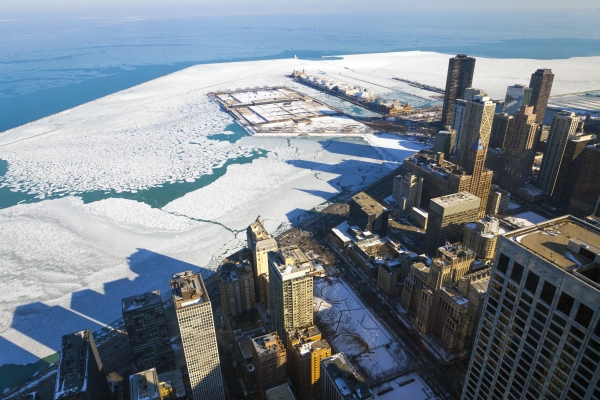 CHICAGO — Chicago is living up to its reputation as the nation’s transportation bottleneck.

Severe weather and a rise in freight demand this winter weighed heavily on the city of broad shoulders, creating a cargo backlog at the nation’s largest freight hub and the biggest North American cargo bottleneck — one that’s still being worked through.

Although railroads gave priority to intermodal trains because of their more time-sensitive nature, an uptick in coal traffic and other carload freight added drag to the entire network. That left many retailers and manufacturers receiving containerized goods later than scheduled.

It could happen again. Chicago might not get a winter so severe and unrelenting for many years — if ever. But railroad executives and city officials warn more freight will move through the city even as a major public-private effort to boost rail capacity crawls forward. The railroads have taken note, particularly after the delays forced some carriers to turn away business in the first three months of the year.

The rail industry “should have pulled the trigger faster on rerouting cargo,” BNSF Railway Executive Chairman Matt Rose told the JOC in Chicago. He added that the six largest Class I railroads that connect in the area should also better switch or hand-off cargo to each other.

But it’s going to take more than faster decision making in rerouting cargo and better interchanging, a tough request considering railroads gear their networks for productivity from within and less on efficiency of the total line-haul. In other words, a railroad will focus on getting an intermodal shipment to the line of another, only to have the cargo wait a day or more before being picked up by the other carrier, Tom Finkbiner, a noted intermodal analyst, said.

Besides, the jumble of rail lines, both freight and passenger, and roadways in the Chicago metropolitan area would hamper rail traffic even if the carriers worked hand-in-hand on interchanging cargo and shifted freight away from the hub. That about 25 percent of freight rail traffic moves through the Chicago area and railyards and terminals are scattered in and around the city illustrates the extent of the network entanglement and resulting congestion.

“You can come from the West Coast to Chicago in 48 hours (via train) and lose 24 to 30 hours just getting across the metropolitan area of Chicago to go on to the destination,” James Kvedaras, director of U.S. public and government affairs at CN, said April 23 at the NAFTANEXT conference in Chicago. ”That’s for stuff that doesn’t even have to be physically in Chicago.”

The Chicago Region Environmental and Transportation Efficiency Program is key to coping with the freight growth and speeding up the movement of goods through the hub, Kvedaras said. Work on the $3.8 billion project, launched in 2000, has slowed, largely because fewer dollars are coming from the federal government and the state of Illinois. The various government bodies, along with the freight rail industry, have already kicked in about $1.2 billion toward construction work. In terms of projects that boost freight rail fluidity, about half the work has been completed, said Jeffrey Sriver, CREATE program manager at the Chicago Department of Transportation.

To wrap up the majority of work that would increase freight rail capacity, CREATE needs about $1 billion to relieve road and rail congestion on the South Side, where four freight railroads and two passenger lines cross major thoroughfares. The preliminary design and environmental review for the initiative, known as the 75th St. Corridor Improvement Project, is nearly complete, and it will be followed by the final design process, Sriver said. Then it comes down to finding the money.

Getting funding for CREATE used to be so much easier before federal earmarks became a toxic word in Washington following the recession, said Benjamin Brockschmidt, executive director of the Infrastructure Council at the Illinois Chamber of Commerce. Now, Congress is struggling to maintain surface transportation funding, and the majority of state money coming from Springfield is for maintaining existing highways, roads and bridges, not building new capacity. Brockschmidt hopes that a push to increase the state fuels taxes and vehicle registration fees connects south at the state capitol. State legislators are also being pressured to end diversions of surface infrastructure dollars toward non-transportation work. With states bracing for less funding from the federal government, some states are working to raise their fuels tax like Indiana and Vermont have done or to follow Virginia in replacing the fuels tax with a sales tax on the wholesale price of gasoline and diesel.

Illinois Chamber of Commerce President and CEO Doug Whitley told Congress in June that all CREATE parties, including the freight railroads, need to kick in more toward the project. The Association of American Railroads, the freight rail industry’s main lobbying force, didn’t return a request for comment. So far, the railroads have contributed about $200 million, with the various government bodies funding more than $1 billion worth of work.

“I think CREATE was broke when it started and it’s been broke ever since, and it’s created zero value in my view,” Harrison told investors during a first-quarter earnings call. “You know, it’s hard enough to get two railroads to agree on something much less seven or eight, and it’s a bureaucratic machine that adds additional layers that provides nothing in return.”

Brockschmidt rejected accusations that CREATE wasn’t improving freight rail traffic in the Chicago area but did note some carriers will see more benefit from network improvements than others. According to the most recent statistics available from CREATE, collected in early 2013, the project has reduced freight delays by 28 percent and passenger train delays by 33 percent.

Harrison said he doubts last winter was the last time massive freight backlogs in Chicago will occur and said the region doesn’t have the ability to handle the freight, particularly hazardous cargo. With roughly 40 percent of CP traffic originating, terminating or moving through Chicago, the railroad is trying to divert traffic that doesn’t need to be there, President and Chief Operating Officer Keith Creel said.

“I would say the most eminent, the only structural constraint that we have in the network given the level of business we face today is Chicago, and I don’t know what the answer is to Chicago,” Creel said.

If the Indiana Harbor Belt Railroad — which has a main line circling Chicago from the northwest to northwestern Indiana — was for sale, buying the switching carrier could help increase CP’s capacity in the area, he said. Harrison said CN tried to buy the line when he worked for the largest Canadian railroad, but the owners wouldn’t sell the railroad.

CP signaled that it wasn’t planning to sink much more money into its Chicago footprint, but other railroads are. Archrival CN expects to expand its Kirk Yard facility in nearby Gary, Indiana, by the end of the summer, giving it more capacity in the Chicagoland area.

Hundreds of miles away from the Windy City, CSX is working to reduce congestion in Chicago by expanding its intermodal network hub in North Baltimore, Ohio. The facility in northwest Ohio allows the railroad to route transcontinental trains that don’t need to stop in Chicago, cutting transit times 24 to 48 hours. By early 2015, CSX plans to add two more wide-span cranes to the facility, bringing the total number of cranes to seven, and to add new processing track.

Chicago took freight business from Kansas City and St. Louis because of rail mergers, not necessarily because the cargo had to be there, Harrison told investors. He said there need to be other places near the Mississippi River where eastern and western railroads can interchange cargo. Harrison reiterated his belief that soon each of the two eastern railroads would merge with a western railroad counterpart, providing more fluidity to transcontinental moves and maintaining competition.

“Chicago is going to get fixed; it’s just a matter of time,” Harrison said. “For some reason we’ve got to get battered and bruised in this industry before we wake up.”