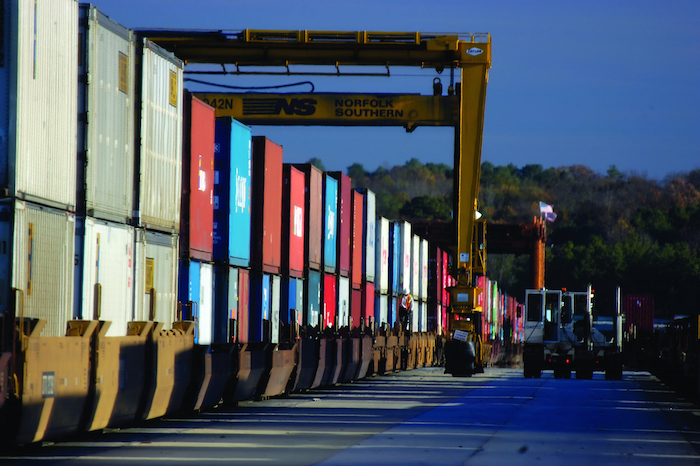 This story was written before a massive blizzard hit Chicago over the weekend.

A key metric of U.S. intermodal rail service continues to show improvement even as volume builds, giving shippers a better shot of seeing the level of service they saw in 2012-2013 as soon as the spring.

But any number of threats, ranging from a West Coast port lockout to the reappearance of brutal weather winter seen last year could quickly derail the rail industry’s gains. Still, the metrics and statements made by rail executives during recent fourth-quarter earnings show that their efforts to improve intermodal service are starting to yield results.

While this week’s Northeast winter storm caused service disruptions to the networks of CSX Transportation and Norfolk Southern Railway, the weather has been more favorable to the railroads than it was last year. That’s reflected in just how much average intermodal train speeds are compared to a year ago, when a Polar Vortex roiled most railroads’ networks and produced a cargo backlog they have working since to reduce. Intermodal trains speed last week were 4.5 percent faster than they were a year ago.

While overall intermodal rail service still has a way to go before it hits mid-2013 levels, the railroads insisted during fourth-quarter earnings calls that progress is being made. Norfolk Southern Railway CEO Wick Moorman went as far as to say the eastern U.S. railroad expected to return service to 2012-2013 levels by July. CSX Transportation CEO Michael Ward declined to give a time frame, but he did say strategic infrastructure investments, and more locomotives and train crews, would allow the railroad to “gradually improve service” through the year to “superior levels.”

The railroads aren’t out of the woods yet. Although the waterfront employers said on Jan. 26 that it had reached a tentative agreement on chassis maintenance and repair with the International Longshore and Warehouse Union— a major roadblock to a labor contract — there is still concern of a terminal lockout by employers. If that were to happen, BNSF Railway and Union Pacific Railroad, the two major U.S. Western railroads, would no longer accept marine container terminals. Analysts differ on the severity an embargo of international intermodal traffic would have on rail service, but they agree it would be negative. Because of increasing port West Coast port congestion, BNSF and UP could issue an embargo on westbound empty containers bound for their West Coast on-dock facilities in a matter of a few days, said a container line executive who asked to remain anonymous.

And while Chicago, the nation’s busiest rail freight hub, hasn’t seen the bad weather it did last year, winter is far from over and could contain surprises. Encouragingly, the railroads are better prepared this year, having agreed to a system in which emergency plans are triggered collectively when metrics hit a certain level, a departure from last year’s method of requiring the companies to all sign off before triggering a comprehensive reaction. Aside from beefing up their Chicago area staff, the railroads also say they are doing a better job of keeping freight that doesn’t need to be in Chicago out of the Windy City.

But as the U.S. Northeast storm showed this week, weather disrupting freight movement can come with only days of warning and sharp intensity. Similarly, a West Coast labor disruption could hit rail networks in a matter of hours.