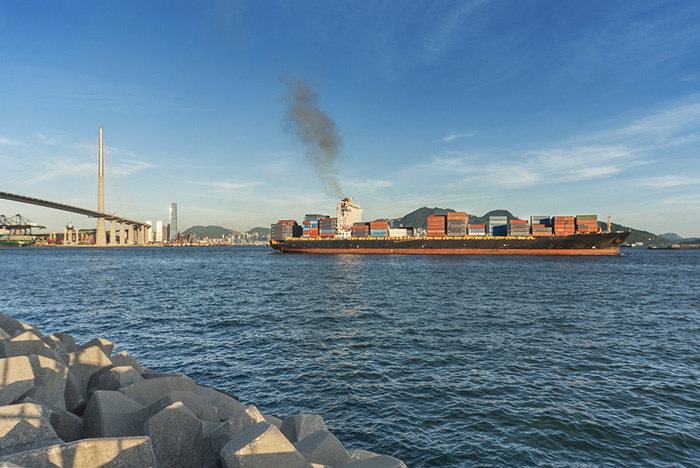 Hong Kong received a timely and stark reminder of the precarious position of its container port via a study from one of its main private business schools.

The world’s fifth-largest port could lose up to 2.4 million twenty-foot-equivalent units in transshipment cargo if the mainland’s cabotage laws are fully relaxed, according the new study by the Hang Seng Management College.

The HSMC study was released just two weeks ahead of a major global industry gathering in Hong Kong established by the government as part of efforts to shore up its maritime and trade hub status.

Nearby Shanghai’s municipal government is lobbying hard for a full relaxation of cabotage restrictions to boost business at its fledgling free trade zone and expand its status as an international maritime center. It wants wholly-owned and majority-owned Chinese shipping companies, as well as top foreign container lines, to be in a position to operate foreign trade import and export business using Shanghai as an international transit port, including the legal right to move containers by sea between Shanghai and other mainland ports.

Since the launch of the free trade zone in 2013, cabotage restrictions in the zone have been gradually relaxed, and foreign-flagged but Chinese-owned ships are now permitted to provide domestic coastal shipping services. Other large mainland container ports, including Ningbo-Zhoushan, Qingdao, and Guangzhou are now also lobbying hard for the relaxation of cabotage restrictions in their jurisdictions.

The current rules prohibit foreign-flagged vessels from moving cargo from one mainland coastal port to another. There are some exceptions, such as in the case of Shanghai’s free trade zone, and the practice is also known to be carried out illegally on a not insignificant basis.

Hong Kong’s special administrative status means the movement of containers between its port and those of the mainland is not a violation of cabotage rules. This position of privilege makes it an attractive hub for handling and consolidating mainland China containers, which in turn sustains its competitiveness in handling transshipment cargo for other trade routes.

Protection of Hong Kong’s role as a transshipment hub is one of the primary reasons for cabotage restrictions in China, but officials at mainland ports believe that the recent decline in throughput at Hong Kong means there is no basis for this protection to continue.

“Hong Kong’s volumes have been dropping steadily for years. The global market is making its choice and has decided it is more cost effective and efficient to deal directly with mainland ports. It is the market that should be allowed to dictate how this plays out,” a senior government official with a major mainland port authority told JOC.com.

Hong Kong’s throughput decline of 0.7 percent in September was its slowest decline since August 2014. The port handled 14.1 million TEUs in the first nine months of the year, a fall of 8.5 percent year-over-year. Its 2015 throughput of 20.07 million TEUs was more than 2 million TEUs down on 2014.

At the same time, throughput at mainland ports, although far from exciting, continues to grow, with year-to-date volumes to September at the eight largest Chinese ports up 2.7 percent over the same period last year.

With a throughput of 19.45 million TEUs, Busan was in sixth place in the 2015 rankings. The South Korean hub has been gaining ground on Hong Kong recently, and the Busan Port Authority had expected to overtake Hong Kong within the next couple of years. However, the collapse of Hanjin Shipping, which accounted for a large chunk of Busan’s total throughput, will most likely put the brakes on that ambition for the time being.

Qingdao and Guangzhou, which sit at seventh and eighth place in the rankings, respectively, would benefit strongly from the relaxation of mainland cabotage restrictions, and officials at both ports believe they would be well placed to surpass Hong Kong quickly should the government lift the restrictions.

Guangzhou in particular has been steadily increasing throughput, and its management is very focused on expanding transshipment traffic, which is a more profitable business for the port than its big domestic cargo segment. The Pearl River Delta port is investing billions of dollars in dredging and hinterland links, as well as providing cash and other incentives to shipping lines to bring more transshipment traffic to its Nansha terminals. Guangzhou is making a big play to capture new transshipment business from Shenzhen and Hong Kong ahead of the resetting of the liner alliance networks in April of next year.

“Mainland China’s cabotage relaxation is weakening Hong Kong’s status of being a key transshipment hub in the region, and creating uncertainty for the local jobs market and economy,” said Lawrence Leung, dean of HSMC’s school of decision sciences.

The HSMC study calls on the Hong Kong government to take concrete steps to defend the position of the container port, including upgrading port infrastructure, developing policies and laws that favor the development of maritime trade, and working on collaborative ventures with mainland ports that support win-win scenarios.

One promising government measure on the table is the development of a single window for the electronic submission of business-to-government documents required to complete shipment processes in Hong Kong. A public consultation document on the project released earlier this year argues that a single window would increase the competitiveness of the port and become a key building block for the e-commerce supply chain infrastructure that will define the trade and transportation industries in the future.

The efficiency and cost-saving possibilities of single window applications are well proven the world over, and certainly this is a step in the right direction for Hong Kong. This and other ongoing initiatives by the government and private sector will help the territory leverage its substantial commercial trading knowledge and heritage to maintain its relevance in modern supply chains.

However, with its destiny looking to be increasingly out of its own hands, the possibility that the port of Hong Kong will regain anything close to its former glory and scale in terms of container throughput volumes is looking less and less likely.