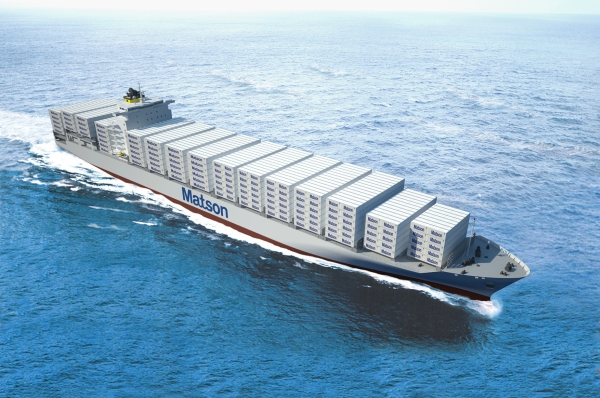 Artist’s rendition of one of Matson’s planned Aloha Class vessels.

Matson Inc. has signed a contract with Aker Philadelphia Shipyard for two dual-fuel container ships that can be powered by liquid natural gas or diesel fuel.

The company announced the order for the 3,600-TEU ships, to be delivered in 2018, during its third quarter earnings conference call. The company reported net income of $17.2 million, down from $19.1 million a year earlier. Matson attributed the decline in net income largely to lower volume in its core Hawaii market and lower freight rates in its service from China to Long Beach.

Matt Cox, president and CEO, said Matson’s Hawaii volume decreased modestly in the third quarter after experiencing significant growth in the first two quarters of the year. Matson expects fourth quarter volume to be modestly lower than in the fourth quarter of 2012.

Freight rates in the China trade have been under pressure all year due to overcapacity in the trans-Pacific, but Cox noted that Matson offers an expedited service that runs close to 100 percent of capacity. Matson’s premium freight rates in this niche service did not decline nearly as much as the overall rate structure in the eastbound Pacific, he said.

With the peak shipping season in the eastbound Pacific nearing its end, Matson anticipates modest rate erosion to continue for the rest of the year. Trade volume in its Guam service decreased slightly in the third quarter due to the timing of select shipments, and little if any growth is anticipated in the fourth quarter in the Guam service.

Matson’s earnings also were affected negatively by a $3.1 million decline from its joint terminal operation with SSA Marine at the Port of Oakland. SSAT took over operation of adjacent terminals that had been run by APL and Total Terminals International.

The higher-than-expected transition costs as the Oakland operations were expanded from about 100 acres to more than 300 acres fell mostly in the third quarter, although Cox said some additional costs could spill over into the fourth quarter.

Consolidated revenue for the third quarter increased to $415 million from $401.4 million in the third quarter of 2012. Volume in Matson Logistics’ intermodal and highway business grew at a healthy pace. The increased volume along with cost-cutting measures resulted in improved operating income margin. However, a molasses spill in Honolulu harbor in September weighed on the results. Total costs relating to the cleanup and other factors have yet to be finalized.

Matson’s order for the two 3,600-TEU Aloha Class vessels, the largest ships ever ordered for the U.S. Jones Act trade, reflect the company’s confidence in long-term growth in the Hawaii trade, Cox said. The vessels are specially built for the Hawaii trade, with extra refrigerated container capacity and the efficient carriage of construction materials. The ships are designed to operate at speeds in excess of 23 knots, which will ensure timely delivery of goods in Hawaii.

Matson’s order for LNG-powered vessels follows a similar move by Tote Inc. for its Sea Star Line service between the continental U.S. and Puerto Rico. Tote also is converting two ships to LNG for use between Tacoma and Alaska. Horizon Lines also plans to upgrade two steam-turbine vessels with dual-fuel diesel engines.

The company also announced that it has entered into a private placement agreement pursuant to which Matson will issue $100 million of 30-year senior unsecured notes, with the proceeds to be used for general corporate purposes. Joel Wine, senior vice president and chief financial officer, said the new financing will improve the company’s liquidity and positions it to fund its fleet renewal.