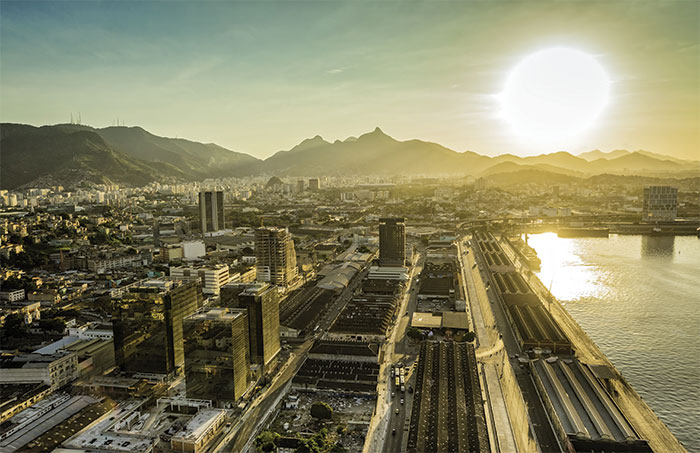 Battered by dual economic and political crises, Brazil is wracked by uncertainty.

Brazil should be booming. Hosting an Olympics, after all, typically brings an economic windfall. But with next month’s summer games a disaster long before the torch is lit, and with political and economic upheaval swirling, South America’s biggest economy is in the midst of one of its deepest recessions.

And that’s causing heavy declines in containerized shipping volumes while paradoxically creating export opportunities because of weakness in the nation’s currency, the real.

In short, Brazil is taking a pummeling from a slump in commodity prices, a series of corruption scandals and a political mess leading to impeachment proceedings against President Dilma Rousseff, who was re-elected in November 2014, when the country was already beginning to split into two warring factions and the economy was showing signs of wear and tear.

The resulting mess reduced GDP by 5.4 percent in the first three months of this year, the eighth consecutive quarter the economy has contracted. And, although the most recent performance was a slight improvement over the fourth quarter of 2015’s 5.9 percent dive in GDP, it’s not a huge accomplishment because that decline was the largest of any quarter in the country’s history.

These dire economic statistics have had a dramatic impact on containerized imports. Indeed, one of the world’s hardest-hit trade lanes has been the route between Asia and the east coast of South America, where Brazil accounts for more than 90 percent of the cargo moved.

In an attempt to keep freight rates at survival levels, carriers merged several services from the east coast of South America to Asia, cutting the number of slings from six to three during the past 12 months and from eight just a few months before that. There are now only three weekly dedicated container services in the trade, according to DynaLiners, the container shipping report of Netherlands-based research firm Dynamar. Among the consolidations were:

“These are all reactions to overcapacity as Argentina and Brazil’s economies have struggled,” DynaLiners said. “As a result, annualized trade capacity (put at 70 percent of the nominal space and corrected for non-core ports) has shrunk by 34 percent to 976,000 TEUs. In contrast, average ship size increased 20 percent to 9,100 TEUs.”

Uncertainty will define the market for the foreseeable future

Some spot rates jumped, according to industry analyst Alphaliner, from $100 per TEU in early February to $1,700 per TEU in mid-May.

Looking ahead, carriers might be able to enjoy a more balanced trading scenario out of Brazil, but getting exporters to pony up for skyrocketing freight rates — necessary because carriers have largely been taking a loss on them for some time — could be difficult during an economic crisis.

For now, that crisis shows little sign of abating. With investment and consumption plummeting, Brazil’s GDP declined 3.8 percent last year, and is expected to retreat another 3 to 3.8 percent this year, according to the Instituto Brasileiro de Geografia e Estatistica.

Inflation rates, meanwhile, more than doubled from 2012 to 2016, peaking at 10.7 percent in January, and interest rates followed suit, hitting 14.25 percent now versus 7.25 percent four years ago.

Acting President Michel Temer, who is heading a new coalition of the center PMDB party and center-right PSDB, has tried to steady the ship, but a constant flurry of accusations against members of his new government have led to two resignations and more are pending, so the stability he promised has yet to materialize fully.

As a result, shippers and manufacturers lack confidence in what the near- to medium-term future will bring, so making business plans is fraught with problems.

Robert Grantham, owner of Navagantes-based ShipConsult, said he believes the Temer administration is heading in the right direction and that appointing Henrique Meirelles, a former president of Brazil’s central bank and executive at the BankBoston, as economy minister was a smart move. Allowing Meirelles to appoint his own team was even smarter, said Grantham, who was once country manager for China Shipping.

The uncertainty, he added, won’t ease much until the question of Rousseff’s impeachment is resolved, likely in early to mid-August — ironically coinciding with the Aug. 5 to 21 Rio Olympics. “We are facing some major problems, with formal unemployment rising to more than 10 percent when it was only between 3 and 5 percent three years ago,” Grantham said. “We are seeing domestic car sales hit historical lows, but we manufacture a lot of cars so exports are rising there, and in other sectors, too, such as beef and chicken.

“When the economy was growing, employment was growing, too. Now Temer has to turn things around. He has the support of Congress,” Grantham added. “I think the green shoots of recovery will be clearly visible in August after Dilma has gone. Industrialists are showing confidence in the economic team of Temer and their measures, but they are waiting for the political scenarios to clear up before they really get moving. Overall, there is a feeling we have reached the bottom of the recession.”

Imports have been hit the hardest

Brazilian importers have suffered the most and will continue to suffer for some time, with electronics, electronic components (mostly destined to the Manaus free trade zone), automotive parts, chemicals, medicines, white goods and cars — although not high-end luxury cars — experiencing declines.

The massive decline of the real, however — which has been trading in a range of 3.3 to 4 to the dollar this year, compared with 1.6 to the dollar in 2010 — is creating opportunities for Brazilian exporters. Chicken, beef, pork and shoe exporters have gained enormously from the exchange rate swing, and lobbying of Temer’s government from these and other sectors, especially in the area of improved infrastructure to cut transportation costs, is starting to have an impact.

In volume terms, Brazilian chicken exports are forecast to rise more than 10 percent this year; shoe exports should rise more than 20 percent, possibly as high as 30 percent to the U.S., according to industry association Abicalçados; and beef exporters association Abiec is predicting red meat exports will grow 15 percent after increasing 12 percent to 479,000 metric tons in the first four months. The Middle East and China have been the main destinations.

Maersk Line, meanwhile, purchased 30,000 new refrigerated containers to help it meet demand for the rise in meat exports. Maersk has deployed most of those containers in trades to and from South America’s east coast.

Like Grantham, Maersk is growing more optimistic that Brazil may have hit the bottom of the recession and the import cycle. In its first-quarter trade report for the Latin American region, Maersk said its quarterly imports reached their lowest level in seven years and Brazil had become a predominantly export economy for the first time since 2011.

“The market is wondering if the Brazilian economy has finally hit rock bottom, since, for the second quarter, we anticipate an improvement in imports compared to the first quarter, or at least we believe, with cautious optimism, that Brazilian imports will fall at a slower rate,” the Danish company wrote.

Brazilian pork, beef and chicken exports, it noted, all increased, by 67 percent, 26 percent and 12 percent, respectively, in the first quarter of 2016 versus a year earlier.

“Asia has taken the lead as the No. 1 Brazilian refrigerated cargo destination,” Joao Batista Momesso, Maersk’s trade and marketing director for the east coast of South America, told JOC.com. “The region accounted for an above-average growth and reversed a flow that hitherto was based on Europe. However, the greatest demand on the export side has been limited by imports declining, impacting the availability of spaces and increased shipping charges bound for Asian markets.”

China’s lifting in May of a three-year embargo on Brazilian beef, coupled with Brazil’s increased purchasing power in Asian markets and a devalued real, ensure an above-average performance for Brazilian beef, whose exports rose 19 percent to Asia and were up 26 percent worldwide in the first quarter, Momesso said.

“We were losing money on imports,” he said, “and we did, like the rest of the market, need to reduce capacity. The challenge is with lower imports and lower capacity, but the industry will have to adapt. We were losing money on imports, so we have had to find ways to redress the balance and bring in more dry containers. Now exporters will have to pay more, even those moving commodities (such as soya and wood), which have grown in recent times.”

The turmoil has bred a new normal

The new Temer government also is reason for optimism that imports, especially auto parts, will pick up later this year, the Maersk report said.

Brazil’s biggest trading partners today are China ($37.3 billion in exports) and the U.S. ($35.3 billion), followed by Argentina ($14.1 billion) and Germany ($13.8 billion). After lifting its Brazilian beef ban, China imported 51,000 metric tons of Brazilian meat in the first quarter, worth $213 million, ranking it third among Brazilian beef importers. Hong Kong was the largest importer with 72,380 metric tons, so the two combined accounted for some 11,000 TEUs of beef imports in the quarter.

But until Brazil puts the economic and political turmoil to rest, container carriers will need to adjust to this new normal. “It has been very challenging in Brazil and on the east coast of South America trade lanes recently. We are going through these big structural changes, mostly stemming from the crises in Brazil,” said Julian Thomas, head of Hamburg Sud and Aliança Navegação in Brazil and Argentina. “This has led to a massive drop in imports, which has led, in turn, to a return to the northbound legs being heavier again than the southbound legs, and this is the case in nearly all trade lanes.”

This flipping of the trade balance has a number of consequences for freight rates and for logistics managers. Among them, according to Thomas, is that there is demand for more empty containers in countries on the east coast of South America and there are questions about how much elasticity is left in rates to move commodities such as soya, which had been filling containers on the previous weak leg out from Brazil.

“With all these changes, there is now demand for more dry equipment (on the east coast of South America), and that changes everything,” Thomas said. “Also, in recent years we have built up new business by taking on commodities — such as cotton, sugar and, even more recently, soya — that used to move as bulk cargoes but can now go in boxes.”

“U.S. exports to Brazil have been slashed drastically,” said Mario Moreno, senior economist for IHS Maritime & Trade, the division of IHS that includes JOC.com. “The problem with Brazil is that it is in recession and its neighbors Argentina and Venezuela have had problems, too. I think the recession in Brazil will last the rest of this year as the economic and political problems continue. On the other hand, imports from Brazil into the U.S. are doing well, and rose 12 percent during the first quarter of this year, mostly linked to the rise in the U.S. construction industry for houses.” Such a flip has occurred in the trade between the east coast of South America and the U.S. East and Gulf coasts. During the first quarter of 2016, U.S. imports from Brazil rose 17.9 percent year-over-year, from 67,847 TEUs to 79,166 TEUs, according to PIERS, a sister product of JOC.com within IHS. Exports from the U.S. to Brazil, however, fell 33 percent, from 67,930 TEUs in the first quarter of 2015 to just 51,130 TEUs this year. For 2015 as a whole, U.S. exports to Brazil slid 14.7 percent, to 256,996 TEUs, while U.S. imports jumped 8.8 percent, to 315,551 TEUs, according to PIERS.

He cited lumber, granite and furniture imports as growth leaders for this year. Overall, Moreno expects U.S. containerized imports from Brazil to increase 7.5 percent this year and U.S. exports to plummet 23.3 percent.