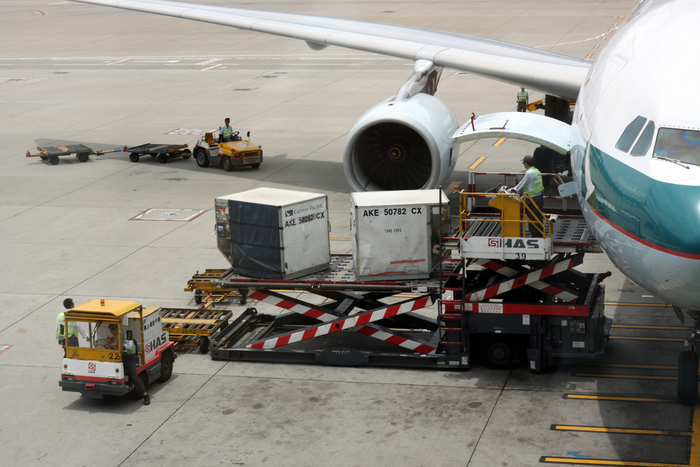 Cathay Pacific loads cargo into a passenger plane deployed to supplement freighter capacity. But falling rates and higher operating costs of the passenger-freighters is causing airlines to review the deployment of the aircraft in cargo-only roles. Photo credit: Shutterstock.com.

Forwarders and analysts believe air cargo prices will remain at historically high levels through the summer, supported by disrupted supply chains as manufacturing restarts and reduced capacity for ocean transport because of extensive blank sailings.

The forecast for rates to remain elevated above year-ago levels comes despite prices falling off their May highs on the easing of urgent demand for medical supplies to treat the coronavirus disease 2019 (COVID-19).

Edoardo Podestà, chief operations officer, air and sea logistics for Dachser Group, said rates remained at historically high levels, even though they were much lower compared with a few weeks ago.

“The masks and personal protective equipment (PPE) shipment boom is basically over and freight rates have been decreasing sharply in the last few weeks from the madness we saw in April and early May,” he told JOC.com.

“For the time being general cargo is still weak, but whether this is due to lack of demand, still too-high rates, or both, is difficult to say,” he added. “As of now, the more realistic picture is of weak demand with small incremental increases throughout the summer months, with freight rates hovering at existing levels.”

Yngve Ruud, executive vice president of air logistics at Kuehne+Nagel, said the forwarder did not expect a change in the significant imbalance between demand and capacity available in the market.

“We do see that urgent air cargo demand for PPE is starting to decline, which is also reflected by the reduction of the dedicated-for-PPE passenger freighters,” Ruud told JOC.com.

“At the same time, resumption of manufacturing in formerly locked-down regions, and the extensive blanked sailings by the ocean carriers, is causing disruption in supply chains and will continue to make air cargo essential for shippers that under more normal circumstances would not usually turn to air,” he added.

Alan Hedge, principal at aviation analyst Hedge & Associates, agreed that air cargo demand for critical PPE was falling, but he did not expect rates to drop to the “normal” levels seen before the coronavirus-driven peak.

Hedge said as global manufacturing recovered, the disrupted supply chains would support the higher rate levels, as would one-time retail restocking, although this is now subsiding in the US. Also helping prevent a rate slide were the blanked sailings, renewed demand for PPE in some areas of North and South America, and the retirement of older freighters.

Eytan Buchman, chief marketing officer of online rate marketplace Freightos, said in a rate update Tuesday the capacity crunch and peak PPE demand that in May sent air rates more than 400 percent higher than the start of the year has continued to normalize, bringing prices back to earth.

“Shippers who’ve been priced out of air by massive PPE orders may be responding to the falling rates, as Freightos WebCargo users placed a record number of e-bookings per week on the platform last week,” he said.

Celine Hourcade, transition director at The International Air Cargo Association (TIACA), said the global outlook was highly uncertain and much would depend on whether there was a second wave of the coronavirus that led to a new series of restrictions and lockdowns.

“Everyone is blind for the next few months, and we have such uncertainty in all the parameters that we need to be able to do our forecasts,” she told JOC.com Tuesday. “Trade and travel restrictions are still in place and the opening of borders will depend on economic and health situations, but it will also very much depend on public perception and political decisions.”

But Hourcade said it was clear that, regardless of the scenario, a global economic recession was coming, and it would hit all countries and economic regions of the world. “When you impact the GDP, you impact the livelihoods of people, and people won't have the money to travel and consume more,” she said. “So there will be fewer goods being transported around the world.”

With such uncertainty in the air cargo market, forward-looking tools such as block space agreements or long-term contracts were on hold as the market continued to slide back towards normal pricing levels, Freight Investor Services (FIS) noted in its latest update.

A key development in the past couple of weeks is the waning enthusiasm for deploying passenger planes grounded by global travel bans in cargo-only roles. The International Air Transport Association (IATA) estimated in May that as many as 1,300 passenger planes were carrying cargo to supplement freighter capacity and boost airline revenue.

But FIS said several airlines, including Cathay Pacific, will be “pulling the plug” on passenger-freighters, as the falling freight rates begin to converge on operating costs. “This isn't surprising considering the inefficiency of these aircraft in moving cargo and the time it takes to load thousands of boxes through cabin doors and onto seats,” the analyst noted.