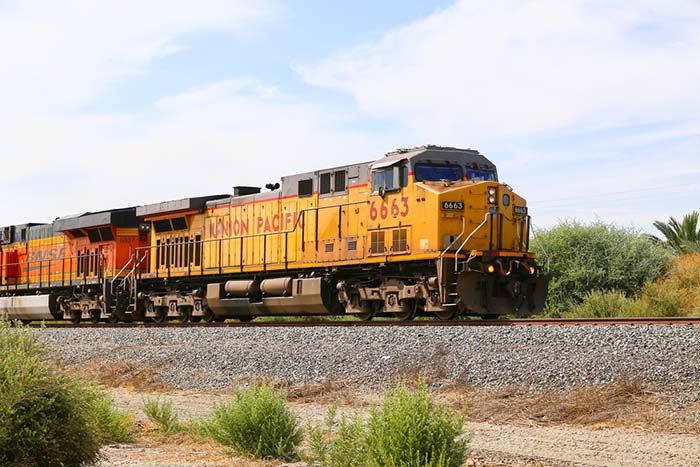 Volatility on the maritime segment of the supply chain is starting to wash ashore.

Executives at Union Pacific Railroad, the largest rail operator in the United States, said Thursday the Western railway has lost some of its pricing power after domestic and international freight demand shrank in the third quarter.

Pinning a rough third quarter on the volatile ocean container shipping industry, UP posted year-over-year declines in third-quarter intermodal volume and related revenue, as well as a double-digit decline in overall profit Thursday. Investors have noted that they’ve witnessed the railroad moderating prices and many have expressed doubts as to whether the railroad will continue to keep shipping prices above inflation.

UP assured its stakeholders that it won’t pursue cargo at any price to gain market share. CEO Lance Fritz said on Thursday’s call that rates must remain profitable. “If we can’t find that, we walk away from it,” he said.

Although UP, like many other Class I railways and their over-the-road competitors, is finding there simply isn’t enough demand in the market to keep prices high.

“There is a significant volatility going on in the international container ship business. There have been three major mergers, one bankruptcy, there are a number of other entities that are in dire or questionable financial shape,” Eric Butler, UP’s chief marketing officer, said on a Thursday earnings conference call with investors.

Softer domestic sales and high retail inventories, which have plagued the railway’s bottom line for a year now, also contributed to the double-digit decline in international volume.

Volume declines, both domestic and international, contributed to an overall profit decline of 15 percent year-over-year to $1.1 billion. Operating revenue of nearly $5.2 billion was also down some 7 percent.

Like their other North American railways, UP has said it doesn’t foresee the market improving rapidly or significantly any time soon. Some of the most optimistic forecasts now place an intermodal industry rebound sometime in the back half 2017, others as late as 2018.

“In intermodal, our international volumes will continue to be adversely impacted by a strained ocean carrier industry, offset partially by over-the-road highway conversions,” Butler said.

Butler and Fritz highlighted UP’s push for more match-back opportunities at inland operations in order to scare up business in what has become a historically weak market for the international intermodal sector.

Pairing agricultural exporters with consumer merchandise importers in the American heartland has been a long-discussed, but often underutilized service among Class I railroads. It’s simply proven too much a financial burden to effectively reposition containers from metropolitan locations where there is excess supply to deficit equipment areas in rural locations.

There always will be a stronger demand for the inbound move than the outbound move, because imports typically consist of higher value goods that produce better profit margins for those moving them inland. Class I railroads, hurting from poor carload business and no longer seeing post-recession import surges, are seeing a widening window for match-backing as an historically strong harvest is set to hit the rails.

“One of the things that all of the container ship companies are looking at doing is finding ways to have matchbacks or exports from the US to Asia. One of the large historical exports has been grain and in particular the (dried distillers grains) to China,” Butler said. “We are continuing to that look at that as an opportunity to grow our business in terms of the westbound business to Asia.”

DDG exports are now threatened by China’s recent ban on some of the grains after the country contended US exporters are selling the animal feed product at unfairly low prices hurting the Chinese market. Still, Fritz said that UP, because of its size and West Coast connections, is perhaps uniquely positioned to take advantage of match-back opportunities.

“What Eric just outlined is indicative of the franchise strength that the Union Pacific brings to the industry. We've got breadth and coverage in a number of markets that allow us visibility into potential matchbacks,” Fritz said.