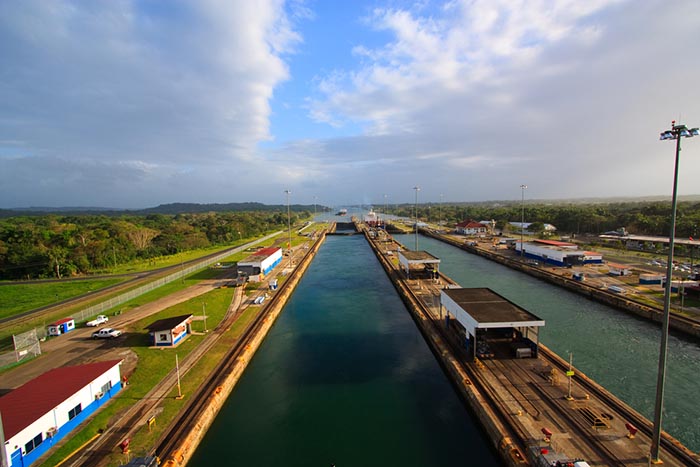 The Panama Canal Authority is betting its future on more than a third set of massive new locks that can handle post-Panamax ships and attract more container services. It is counting on construction of a large new container terminal that will serve as a transshipment hub for North and South America and the creation of a new logistics zone along the canal that will attract assembly and light manufacturing activity.

The canal agency has already attracted interest from 13 potential bidders on a project to build and/or operate a new terminal at Corozal close to the Pacific entrance to the canal. It plans to put out a request for proposals this March or April following completion of an environmental impact study in February.

In its initial phase the terminal will have a capacity of around 3.1 million 20-foot-equivalent units, rising to 5 million TEUs in five to seven years if demand warrants the expansion. The terminal’s volume would consist mostly of the transshipment of containers from large post-Panamax ships onto smaller ships for delivery to smaller ports throughout the hemisphere that cannot handle post-Panamax ships. The new terminal could also serve to load and unload cargo for assembly in a free-trade zone in the new logistics park or for some kind of processing before transshipment to another port.

When the new locks open to commercial traffic, probably in May, smaller ports in North and South America that have been accustomed to handling Panamax ships won’t all be able to handle the new post-Panamax vessels, so the new transshipment hub at Corozal will be designed to bridge this gap as well as to minimize the number of port calls that a post-Panamax ship has to make in the Western Hemisphere.

“Our main business is transit in the canal and that will be there. What we're adding is additional magnetism by having more capacity, more transshipment capacity,” said Canal Administrator Jorge Quijano said. “Transshipment is best located at a central location — at a hub. And Panama is that central location. So don't send the big ship going down south if you can have a small ship doing that route.”

Tioga Group partner Dan Smith thinks the canal will gain more transshipment activity, especially for cargo bound for ports in the U.S. Gulf Coast that can’t handle the neo-post-Panamax ships of up to 13,000 TEUs. “I know that for a while Wal-Mart transshipped cargo for Houston at Panama where they were splitting off West Coast volume from East Coast volume,” he said. “I think transshipment in Panama is going to be a very live option, particularly for the Gulf Coast.”

But not everyone thinks Panama will be able to attract more transshipment. Asaf Ashar, a research professor at the Ports and Waterways Institute at the University of New Orleans, thinks transshipment growth will be curtailed by the growing dominance of alliances in global trades.

Many ports in both North and South America are already deepening harbors to handle the bigger ships. “All the East Coast ports are running very hard to get to a 50-foot mean low draft,” said Dean Tracy, managing director of Global Integrated Services, a logistics consultancy in Winston-Salem, N.C. “Why would you drop freight off in Panama and then continue up the East Coast?”

Quijano refutes this. “A big ship doesn't want to make too many stops. They normally would like to have maybe two, maximum of three end stops,” Quijano said. “A big ship like that wants to unload a lot of cargo, and wants to load a lot of cargo, and then go on to the next stop. What makes sense is you drop it off in Panama, which is in a central location and then you use the smaller vessel and take that to smaller ports.”

He points to the example of the Maersk Edinburgh, a 13,200-TEU ships that has just been added to a service string from Asia that calls Lazaro Cardenas, Mexico, and Balboa in Panama, where it drops off cargo for transshipment before going to Buena Ventura, on the west coast of Colombia before returning to Asia. “Maersk is waiting for us to open the Panama Canal and then the Edinburgh is going to go through the Canal and they'll use a feeder vessel to go down to Buena Ventura,” Quijano said.

The canal agency is also moving forward with plans to create a free trade zone on 635 acres on the west side of the canal that the U.S. Army used to use as an artillery range. The area has been cleared of unexploded ordnances and now serves as a deposit site for the dredge spoils from the canal expansion.

The canal agency has retained a Dutch company to prepare a master plan for the land. “By March we should have a final report so that we can determine what's the best use of that land, and in what order,” Quijano said.