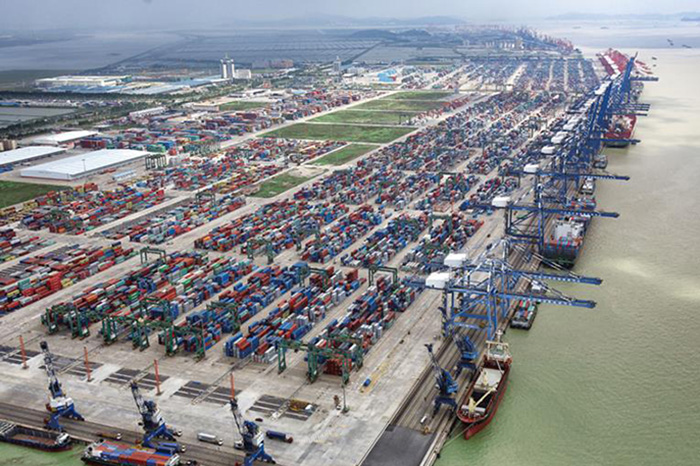 A major dredging project at the port of Guangzhou signals its intentions to capture Pearl River Delta cargo currently traveling to other competitors in the region, which is home to some of the world's busiest harbors.

The project to widen the stretch of water linking its container terminals at Nansha to the main east-west shipping lanes will enable larger vessels to travel the channel in both directions at the same time, cutting around three hours from the time it takes container ships to reach Nansha.

The $415 million project to widen the Guangzhou Port Channel to 345 meters (1,131 feet) is one of a series of major infrastructure and facilities upgrades taking place at Nansha as the Guangzhou Port Group gears up for a planned public stock listing after it receives approval from the China Securities Regulatory Commission. Funds from the listing, which could take place as early as the first quarter of next year, will be used to accelerate the development and optimization of port infrastructure and further increase the competitiveness of the port.

Guangzhou is currently the fastest-growing container port in southern China. Year-to-date throughput stood at 11.8 million twenty-foot-equivalent units at the end of August, up nearly 5.5 percent on the first eight months of 2015 and well ahead of the average throughput growth of 2.4 percent at China’s top eight container ports over the period.

August throughput grew 7.5 percent year-over-year to 1.57 million TEUs although volumes at the other main Pearl River Delta ports of Shenzhen and Hong Kong fell by 2.2 percent and 2.9 percent, respectively, according to the latest figures from the Shanghai Shipping Exchange and the Hong Kong Maritime and Port Board.

Foreign trade-related container throughput at the Nansha terminals grew by 5.9 percent to 2.31 million TEUs in the first half of the year, according to the Guangzhou Port Group.

The Guangzhou government has allocated some $45 million in cash and tax incentives to attract new liner services and increase container volumes over the coming two years. This is on top of $6.7 million already given out over the past year.

The third phase of Nansha International Container Terminals, which will take capacity to over 6 million TEUs, is set for completion by the end of November. An advanced refrigerated warehouse is being constructed as part of the new development.

The port is also upgrading hinterland links as it seeks to build on the advantage of its proximity to multiple cargo sources in the PRD. A new on-dock rail project valued at $1.64 billion is underway and expected to be complete by 2019, and container trucking companies are welcoming the waiving of a $6 per trip toll on a key access road to Nansha.

The government estimates trucking costs for a 40-foot-equivalent unit from key PRD production centers of Zhongshan, Zhuhai, Guangzhou, Foshan, Shunde, Nanhai, Panyu, Jiangmen, and Zhaoqing to Nansha is now between $54 and $169 less than to the competing Yantian terminals in Shenzhen.

The dredging at the Nansha container terminals will make the Guangzhou port more competitive with regional goliaths Hong Kong and Shenzhen.

Beyond containers, Guangzhou port is focusing on consolidating its position as the largest grain terminal in South China and as the country’s third-largest automotive shipping hub after Shanghai and Tianjin.

The terminal will have two ro-ro berths with a total designed handling capacity of 620,000 vehicles upon completion by the end of 2017.

The new terminal will be operated together with three existing auto ro-ro berths at Nanshan Port, which will offer a total automobile handling capacity of 1.8 million vehicles each year.