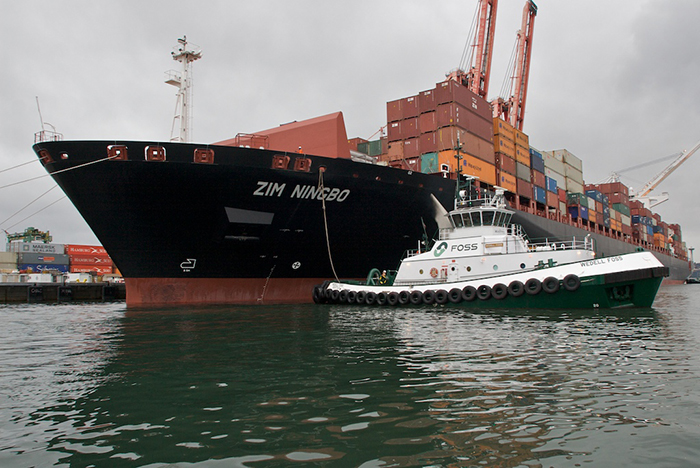 Zim Integrated Shipping Services is one of several container lines reworking their trans-Pacific presence in 2017.

The battle for market share on the Asia-North America trade will not be limited to the three major container shipping alliances, with independent carriers unveiling their own plans to focus on the busy trade lane.

The carriers are planning to capitalize on growing US containerized imports that IHS Markit Maritime & Trade senior economist Mario Moreno expects to expand 4 to 5 percent in 2017, reaching a new peak of approximately 21.4 million twenty-foot-equivalent units, mainly because of stronger economic growth. US real GDP is forecast to grow 2.3 percent this year after expanding by only 1.6 percent in 2016.

PIL and Wan Hai will revamp their two Asia-US West Coast strings, which will be jointly operated with Cosco Shipping Lines, according to Alphaliner. The two strings will cover the Pacific Southwest market, with one string focused on North and Central China using six ships of 6,500 TEUs, and the second string calling on South China with six ships of 7,500 TEUs.

Eight of the 12 ships on these two loops will be deployed by PIL and Wan Hai, with Cosco providing the remaining four, the analyst said. The two strings will be operated outside of the Ocean Alliance network, of which Cosco is a member along with CMA CGM, Evergreen Line, and Orient Overseas Container Line.

PIL and Wan Hai are also expected to take slots on some of the Ocean Alliance’s trans-Pacific loops covering the Pacific Southwest and Pacific Northwest routes through slot exchange arrangements with Cosco and CMA CGM, but it is unclear whether Evergreen and OOCL will be involved in the slot swaps.

In mid-December, Zim announced a restructuring that was independent of any of the alliances and part of a plan to focus on trades in which it has a strong position and competitive advantages. Zim’s all-water ZCP service via the Panama Canal between Asia and the US East Coast will be upgraded and offer inland destinations from the main ports, the Haifa-based carrier said.

On top of the revamped services, Alphaliner said Zim will launch an Asia-Vancouver service in April called the Zim North Pacific service, or ZNP. The analyst said Zim currently serves the Asia-Vancouver trade through an arrangement with the G6 Alliance partners (Hapag-Lloyd, NYK, OOCL, APL, MOL, and HMM) and contributes three 10,000-TEU ships on the G6 Pacific North Express Service 1 and co-loads on the Pacific North Express Service 3.

Nothing is clear cut in the liner shipping business, and although the G6 Alliance will be dismantled in April, Alphaliner said Zim was expected to have a slot swap arrangement with HMM on the ZNP. HMM earlier said that it would continue to run three Asia-West Coast North America services independently, with Maersk and Mediterranean Shipping Co. participating through slots within a 2M+HMM arrangement.

Also in April, SM Line plans to deploy five ships acquired from Hanjin Shipping with capacities of 6,500 TEUs on a service connecting China and South Korea to the Port of Long Beach. The carrier will set sail without the help of an alliance.

Fears have been raised of a rate war on the trans-Pacific as the two new alliances and the independent carriers, such as new entrant SM Line, try to grab or expand market share. SM Line is the newly created entity that acquired Hanjin Shipping's trans-Pacific and intra-Asia businesses.

But Kim Chil-bong, SM Line CEO, was confident of his company’s prospects in the crowded market, and he brushed off suggestions that the carrier would be involved in a fight for market share.

"We won't enter a price war, but we will offer competitive fares through cost-benefit analysis,” he said at the signing of a memorandum of understanding with Busan city and Busan Port Authority to jointly invest in Busan North Port.