THE Alliance creates emergency fund in event of Hanjin scenario

THE Alliance creates emergency fund in event of Hanjin scenario 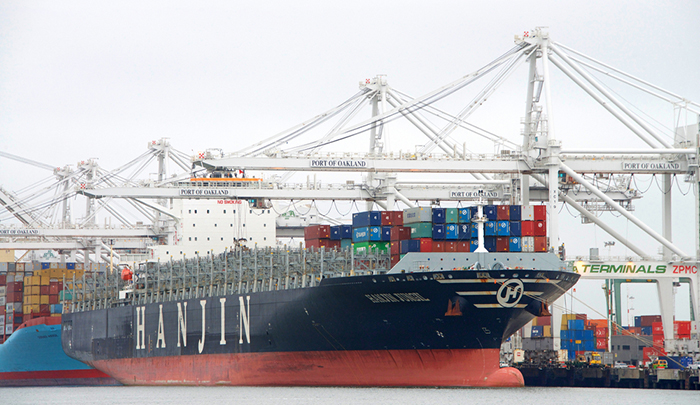 The THE Alliance, understanding how critical certainty is for shippers, has proposed innovative language

within its vessel-sharing agreement that has at least one fan among the Federal Maritime Commission.

WASHINGTON — Container lines within the planned the THE Alliance are developing safeguards, including an emergency fund, to help recover stranded cargo if one of the members collapses as Hanjin Shipping did this year.

Federal Maritime Commissioner William Doyle said he’d like to see the 2M and Ocean alliances adopt similar practices. As shippers scrutinize carriers’ financial stability ahead of the 2016 to 2017 bidding season, the safeguards could provide those that deal with the THE Alliance some reassurances — and give alliance members a contracting edge.

“I find it more than just creative. It’s a group looking for a solution. If a solution like that were to occur, I think the other alliances would follow suit with the same kind of instrument,” said Doyle, who was speaking Thursday at a North Atlantic Port Association meeting outside of Washington, DC.

Doyle and other commissioners on the FMC are now reviewing the vessel-sharing agreement drafted by members of the THE Alliance. This alliance includes German carrier Hapag-Lloyd; the Japanese 'K' Line, MOL, and NYK Line; and Taiwanese Yang Ming. Along with the competing Ocean Alliance, the THE Alliance is set to take sail in April, joining the already-in-place 2M Alliance.

Doyle said he still has serious concerns with proposed language in the agreement related to joint contracting and purchasing power that could hurt domestic US businesses, but could only commend the proposed safeguards in the drafted agreement.

Under the so-called framework language, in the event of a liner collapse the remaining liners in the THE Alliance would have the option to:

Doyle said it marks the first time an alliance agreement has attempted to create contingency plans on how liners would deal with a failed member. “Or, more importantly, how the non-failing carriers can help the failed carrier’s shippers and other customers.”

Doyle has advocated for such agreements after South Korea's Hanjin filed for bankruptcy this past August. The collapse stranded some 540,000 containers, equating to about $14 billion in goods worldwide. The filing not only impacted shippers contracted to Hanjin, but also other members of the CKYHE Alliance, a group that includes two members of the new THE Alliance — 'K' Line and Yang Ming — but also Cosco Container Lines (now Cosco Shipping), Evergreen Line, and other carriers with looser VSAs.

Doyle said Thursday he had recently spoken with representatives of the THE Alliance regarding the proposed failsafes. Though the details are far from finessed, he said, the intent, in part, is to set up a “catastrophic instrument” that could be used when an individual member liner fails.

In theory, Doyle explained, the alliance would institute a funding mechanism. In the event a liner goes under, those undisclosed funds could be used to pay operational expenses to bring ships into port and unload containers to ensure that cargo is not stranded on the water.

However, Doyle reiterated that the details are still be worked out and there are outstanding legal questions surrounding a required emergency fund. “You’d need a fence around that money or that fund or that bonding in the event of a bankruptcy so that it can’t become a claim. These are legal worldwide issues that need to be worked out.”

Doyle was optimistic though, going so far as to suggest that he could foresee other shipping alliances willingly adopting similar language.

In October, Doyle proposed the FMC require all alliances to add such language in their contracts. Such a requirement, though, could face serious challenges by container lines. The Shipping Act of 1984 empowers the five FMC commissioners to determine whether a VSA will likely cause an unreasonable decrease in service and/or an unreasonable increase in cost. If liners’ refused to include a failsafe plan within their VSA, they wouldn’t likely fall afoul of those parameters.

That dispute might now be entirely avoided should liners agree to those terms independently and willingly. It is still unknown if such an agreements will appear in the finalized THE Alliance contract under review today.

“As I said, these details are still being worked out by the parties — but the placeholder language is in the proposed agreement that was filed with the commission,” Doyle said.