US shippers warned to act as truck rate hikes ‘get stronger’

US shippers warned to act as truck rate hikes ‘get stronger’ 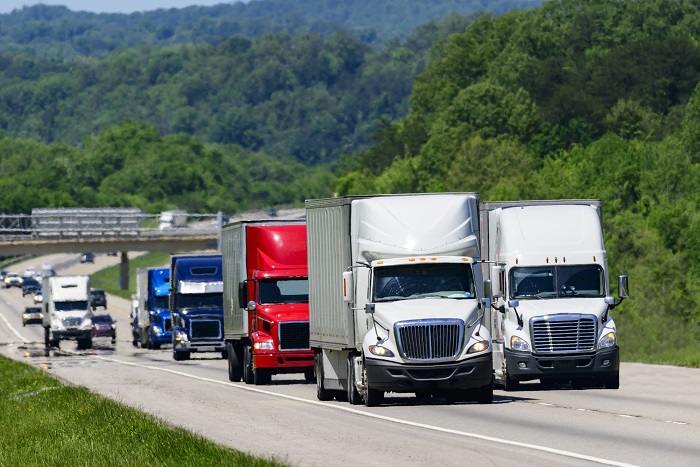 “There is no doubt transportation costs are rising — we’re at an inflection point,” Frank McGuigan, CEO of Transplace, told shippers. Photo credit: Shutterstock.com.


FRISCO, Texas — Randy Cooper’s job used to be easier. When he joined Del Monte Foods as director of transportation and supply chain engineering in 2015, the US surface transportation market was just sliding into a two-year period of softer economic growth and enhanced shipper pricing power. “It was really easy to look great for the first two years,” Cooper said.

“Everytime we went to bid it looked like we were saving money. Now it’s turned,” he told the Transplace Shipper Symposium here. The freight market has turned with a vengeance, according to executives at the logistics company’s annual shipper summit, held May 8 to 10.

Shippers are turning to carriers and logistics partners such as Transplace for answers.

If there was an overriding message to shippers at the Transplace event, it was do not expect external forces, such as market cycles, to return pricing power any time soon. Shippers need to find new routes toward more balanced transportation budgets that include helping reduce costs faced by motor carriers and driving more inefficiencies out of their own supply chains.

Economic indicators, particularly the 3-month and 12-month rates of change within those indicators, signal “the increase in rates is only going to get stronger,” said Alan Beaulieu, president of ITR Economics. Rates will continue to rise, though the rate of increase may slow. “Prices tend to move up quickly and be sticky on the way down,” Beaulieu said.

“There is no doubt transportation costs are rising — we’re at an inflection point,” Frank McGuigan, CEO of Transplace, told shippers. Behavior has to change, he said. “You can’t push all the inefficiency back into transportation. That’s where the costs are coming from today.” That point was driven home by the few Transplace partner carriers invited to the event.

“If I can help my customers, my shippers, work with me to get pay to a certain point, we’ll drive costs down again,” Dennis Nash, CEO of bulk truckload carrier Kenan Advantage Group, said at the event. “You don’t want to get into that pendulum where one year the trucker is in control and the next year the shipper is in control. You want to be in control of this together.”

Also, being a “shipper of choice” will rapidly become “table stakes” in contract talks with carriers. Letting drivers use restrooms or park overnight is always a good starting point, but shippers will have to work much more closely and share much more data with their trucking and logistics partners if they want to become what could be called an “embedded” shipper of choice.

“People are trying to figure out what the hell to do —  it’s a different marketplace than in the past,” David G. Ross, managing director at investment research firm Stifel, said at the symposium. “At the large public truckload carriers, average revenue per loaded mile is up by double digits,” he said, powered by higher rates supported by strong freight demand.

“We don’t think shippers will pay a penny more than then they have to get freight moved,” Ross said, but they’re still coughing up a lot of pennies to get shipments off the dock. “We think rates are going up 5 to 15 percent this year,” he said. Stifel forecasts a 12 percent average increase in truckload rates, with mid-single-digit, less-than-truckload, and intermodal rate hikes.

Ross contends truck capacity is not increasing to meet demand, but actually shrinking, with large and small truckload fleet capacity down 3 percent year over year in 2018, according to data from the American Trucking Associations. “Small fleets grew coming out of the recession, but they’ve shrunk over the the past year,” he said. “In 2015 and 2016 they were growing capacity, but now we’re seeing large and small fleets shrink.”

Truckload spot rates per mile excluding fuel surcharges are up 27.4 percent year over year to $1.86, according to the JOC Shipping & Logistics Pricing Hub.

At Del Monte, Cooper is spending much more time this year talking with Del Monte’s top executives about why transportation costs are rising. “My job now is explaining what’s happening out there to the ‘c-suite,’ so the organization at a higher level starts to understand what’s happening with transportation,” he said during a discussion on carrier behavior.

When it comes to contract bids, Del Monte has made “a concerted effort to concentrate on regional carriers rather than the big guys,” he said. “From our experience, [the ‘big guys’] are the first to raise rates.” The California-based food shipper also is considering shifting more over-the-road freight to intermodal rail and dedicated trucking to secure capacity.

As freight demand remains steady at a higher than typical level, trucking companies are doing more than raising rates. They’re changing their behavior in a “capacity constrained market,” said Mike Riccio, chief marketing officer of Leonard’s Express, a Farmington, New York, truckload carrier. “In the life cycle of our company, we’re going through a metamorphosis,” he said.

Before the market turned last year, “we were trying to be everything to everybody,” Riccio said. As demand rose, the 400-truck carrier “had to decide who we were going to provide value to,” he said. “Who bids every year? Where can we provide critical mass in certain lanes? Who do we have commitments with, and who is always trying to do a bid and take advantage?”

Leonard’s Express now is more concerned with “what’s going on in our own network,” he said, than “the market.” In other words, they’re focusing on reducing cost over increasing revenue.

“Trucking being so asset-intensive, with tractors worth $145,000 with all the bells and whistles, we’re looking to minimize expenses. Driving out costs will gain us more than chasing rates.”

The trucking company feels some of the same pain as its shipper customers. “We used to book whatever came in the door, and if we couldn’t handle it with our assets, we used our brokerage unit,” Riccio said. “Now we’re getting crazy price increases” from brokered carriers. “I’m not going to my customer to tell him there will be a $1,000 additional charge on a certain lane.”

Del Monte and Leonard’s don’t do business together, but the shipper also is looking more closely at how its freight fits with its carriers’ networks. “Carrier utilization has become a lot more important to us as a shipper,” Cooper said. “We know if we help them drive utilization it will show up in the rate.” What’s more, “I love it when a carrier will give me a scorecard,” he said.

“We go over service metrics and scorecards with trucking companies all the time, but there are only a few carriers that will tell me how I’m doing,” said Cooper. “It would be great to know whether I’m getting an A+, and what they would do if I dropped to a C.” Not to mention the spread in terms of rates those carriers would charge an A+ shipper compared with a C shipper.

Agility, the ability to act flexibly as situations arise, is key to carrier-shipper relations in 2018, Riccio said. “Networks have become so dynamic.” For Leonard’s, “the shipper of choice is someone we’re culturally aligned with, where there’s open and honest communication,” Riccio said. “It isn’t always going to be Kumbaya, but you can get through the difficult times.”