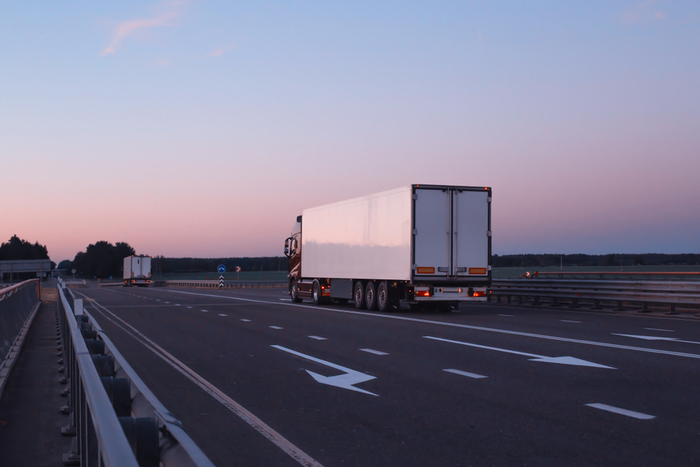 Spot truckload rates are surging on demand for basic supplies during the pandemic. The US economy, meanwhile, is slowing. Photo credit: Shutterstock.com.

Strong demand for essential household goods as the coronavirus disease 2019 (COVID-19) pandemic spreads is driving truckload spot rates up by single-digit percentages in many US freight lanes. The question is whether their trajectory can be sustained as the second wave of reaction to COVID-19 brings large parts of the US economy to a near stop.

Widespread business shutdowns in mid-March may be setting the stage for disruption in capacity and pricing when states and localities begin lifting restrictions, and a surge in Chinese imports is still expected to put pressure on truck capacity at some point in April and May. At the moment, DAT Solutions said its load-to-truck ratios are heading toward 2018 levels.

If spot prices remain elevated into late spring, shippers may see contract truckload rates start to move upward this summer, earlier than expected, DAT said. “We may see the impact of the coronavirus coming on like a hurricane and sticking around like a Hanjin,” said Ken Adamo, DAT’s chief of analytics, referring to the aftermath of the bankruptcy of Hanjin Shipping in 2016.

For some shippers, the best analogy may be with the early days of the electronic logging device (ELD) mandate in 2018, when an increase in demand collided with truck capacity reduced by time constraints. The result was a capacity crunch caused in part by dislocation or mislocation of drivers and equipment.

In the week ended March 15, truckload spot rates rose in 63 of the top 100 lanes tracked by DAT. Dry-van load posts on DAT load boards were up 18.2 percent from the previous week. “We’re seeing the rolling seven-day average for dry-van truck rates rise 5 percent to 7 percent no matter how you slice and dice it,” Adamo told JOC.com. “We are seeing the data in front of us.”

By state, March average inbound truck spot rates are up 19 cents in California and Washington, 12 cents in Pennsylvania, and 10 cents in Indiana and Florida, according to JOC's analysis. Those states have major coronavirus outbreaks, large consumer markets, or are distribution springboards to neighboring states with major urban centers. Outbound rates from those areas also leapt in early March.

A 26-cent increase in the average outbound per-mile rate from Laredo, Texas, and a 28-cent per-mile spike in McAllen, Texas, point to increased demand for imports from Mexico in March, after China-US supply chains snapped in February. Outbound rates from Memphis and Chattanooga, Tennessee, were up 25 and 21 cents per mile, respectively, the JOC.com analysis revealed.

Those sudden and substantial increases in inbound and outbound rates make sense when they’re seen as connecting major consumer markets with important inland distribution hubs. The roar of truck engines, however, can mask the fact that economic activity, at least in brick-and-mortar stores, offices, factories, and warehouses, is slowing to a crawl.

Demand for basic supplies from toilet paper and paper towels to cleaning supplies and food isn’t likely to slow, as more localities and states move toward more stringent restrictions on businesses and individuals. As of midnight Thursday, all of California’s 40 million citizens have been ordered to stay at home, except for those providing essential services

The result is economic paralysis that IHS Markit believes has already pushed the United States into recession, overturning earlier projections for continued growth in 2020. “There’s no question we’re in a recession,” IHS Markit chief economist Nariman Behravesh said Thursday during the JOC webcast, TPM20: What We Missed. “The only question is how deep.”

Predictions of moderate US growth this year have yielded to forecasts of contraction in 2020 that get worse each day. As of March 19, IHS Markit forecast a 0.2 percent economic contraction in the US this year, but that likely will change to a 1 percent drop, said Behravesh. “So far, it looks like the only way to stop it [COVID-19] is by freezing economic activity,” he said.

The result has been a wave of temporary business closings extending from small businesses and restaurants to major retailers and manufacturers. That means trucking companies that aren’t hauling essential, life-sustaining goods aren’t likely to have much to haul until restrictions on businesses and consumers are lifted, which may be in a few weeks or months.

“Two weeks ago, we were still trying to figure out how to evacuate inventory that became stranded or delayed in Asia,” said a vice president of global logistics in the US Northeast, who asked not to be identified. “In the last few days we’ve gone into asking, ‘How do we hold inventory at origin and work with our factory partners to start slowing everything back down?’”

The pandemic is squeezing supply chains like an accordion, and the result isn’t what anyone would call music. What’s likely at the end of lockdowns is a scramble to find capacity and move freight when stores and factories reopen. At the same time, a surge in imports from China is still widely expected to hit US ports in April and May, jacking up capacity demand.

Brian Bourke, chief growth officer at SEKO Logistics, says trucking demand “is so topsy-turvy that regular business activity may be going down, but there’s a surge in supplying businesses with supplies and necessities.” Some customers “are absolutely hunkering down,” he said, while others are “exploding with growth because of demand for their goods.”

That suggests shippers more than ever should stick close to their brokers and carriers and let them know in advance when they will reopen stores or plants and distribution centers, if they’ve been closed. John Janson, global logistics director at apparel importer SanMar, said keeping communications open is even more important now than it was in the boom market of 2018.

“We’re trying to understand which of our customers are going to be closed,” he said. “Most of our orders go out in one day. So we believe if they place an order, they’re going to be open and able to receive it.” But with local and now state-wide restrictions being announced and changing every day, “it’s difficult to digest this. It’s day by day, and we’ve got to be very nimble.”

How to Improve OTIF: 15 Tips for On Time and In Full Delivery
END_OF_DOCUMENT_TOKEN_TO_BE_REPLACED