J.B. Hunt is one of the largest transportation companies in the United States. It primarily operates large semi-trailer trucks (“semis”) and provides transportation services throughout the continental Canada and Mexico. The company, which has more than 120,000 employees, operates more than 12,000 trucks. Over 100,000 trailers and containers are in its fleet.

Parcel vs. LTL: Managing Big and Bulky Shipments Without Breaking the Bank
Global Shipping Outlook: What Will 2022 Hold?
Port Performance North America: When Will the Bottlenecks Ease?
END_OF_DOCUMENT_TOKEN_TO_BE_REPLACED 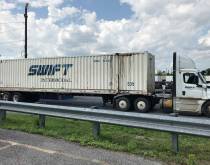 07 Dec 2021
The use of drivers accustomed to hauling 53-foot containers to pick up 20-foot and 40-foot boxes shows how US retail giants are pulling every lever to get truck power into the ports.
MORE »

US surface indices falling, but positive signs emerge
11 Sep 2019
The Cass Truckload Linehaul Index has gone negative for the first time since March 2017, a signal that in addition to spot rates, contract rates are starting to suffer as well; intermodal prices are also expected to go negative in October.

Trucking searches for 2020 vision
05 Aug 2019
The long-term outlook for truckers, and their shipper customers, is blurred by the fog of trade wars, but 2020 will bring changes.

CSX says lower truck rates hurting intermodal
17 Jul 2019
CSX Transportation lowered its guidance for 2019 after offering a grimmer view of the freight market than J.B. Hunt had a day earlier, warning investors that the second half of the year could be worse than the first.

J.B. Hunt licensed as NVOCC, forwarder
17 May 2019
J.B. Hunt Transport Services has received a license to be a non-vessel operating common carrier and ocean freight forwarder to take greater control of the transportation of its containers and chassis from China.

Big US truckload operators drive profits despite slowing volume
25 Apr 2019
Some of the biggest trucking companies are riding the 2018 wave well into 2019, and they’re focused more on building profit than revenue as the US economy slows.

Fastest-growing US truckers don’t expect slow 2019
26 Feb 2019
Double-digit revenue increases may be more difficult to come by this year than in 2018, but profits and acquisitions are expected to fuel the fastest-growing truckload and LTL companies.

Containers out of sights of newest round of US tariffs
08 Aug 2018
Containers were one of only five items among the original 284 items granted a reprieve by the US working group consisting of nearly a dozen federal agencies.

US shippers seek capacity with JB Hunt intermodal, dedicated truck
16 Jul 2018
US shippers are desperate for surface capacity and turning to modes they previously shunned as a result.

JB Hunt: Transport costs rising 10 percent or more
29 Sep 2017
“This is one of the highest periods of turbulence and volatility in supply we have ever experienced, and we don’t think it will abate any time soon,” John Roberts, president and CEO, and Shelly Simpson, chief commercial officer, said.

US truckload carriers see rising demand
21 Apr 2017
Werner Enterprises and Heartland Express follow J.B. Hunt in reporting a rise in freight demand as the second quarter gets under way.

JB Hunt profit falls on lower truck, rail rates
17 Apr 2017
J.B. Hunt’s less optimistic outlook could be an early indicator of what to expect from Class I railroads and trucking companies’ first-quarter earnings to be released over the next several weeks.

No expectation of service impact from JB Hunt, BNSF arbitration
04 Jan 2017
Both companies now contend they are not receiving an equitable portion of the revenue from their partnership.

Low rates cut profits for intermodal trucker J.B. Hunt
17 Oct 2016
Quarterly net profit dropped at the third-largest trucking operator for the first time since early 2014, thanks to lower truckload and intermodal rates. Dedicated is an exception.

Spot truckload demand improves regionally, but US rates stay soft
30 Mar 2016
In certain parts of the country, especially the Southeast, the U.S. spot truck market is showing some early signs of renewal, as retailers gear up for their spring shipping season.