J.B. Hunt is one of the largest transportation companies in the United States. It primarily operates large semi-trailer trucks (“semis”) and provides transportation services throughout the continental Canada and Mexico. The company, which has more than 120,000 employees, operates more than 12,000 trucks. Over 100,000 trailers and containers are in its fleet. 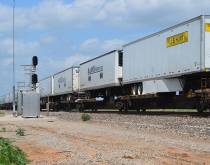 06 Jan 2022
While most shippers are concerned about whether there will be enough chassis and fluidity in railroad terminals in 2022, they are also bracing for a steep increase in contract rates.
MORE »

Major US retailers tapping intermodal truckers to retrieve ocean boxes
07 Dec 2021
The use of drivers accustomed to hauling 53-foot containers to pick up 20-foot and 40-foot boxes shows how US retail giants are pulling every lever to get truck power into the ports.

US truckers hike fees on excessive dwells for trailers, containers
07 Jun 2021
Top trucking and intermodal providers are raising penalties on shippers who do not promptly unload and return 53-foot trailers or containers.

Crippling duty on Chinese chassis upheld in final ruling
13 May 2021
The US Commerce Department has reaffirmed a large antidumping duty on Chinese-made chassis in a final determination that will impact the transportation of international and domestic containers.

After first-quarter freeze, US trucking market heats up
21 Apr 2021
February’s winter storms in the southern and central United States had a large and lingering impact on transportation and supply chains, though freight demand is now in full flow, consuming this spring’s truckload capacity.

Shippers, IMCs eager for answers to solve US intermodal congestion
07 Dec 2020
Intermodal executives want to address the chronic congestion issues in 2020 with railroads and BCOs, but universally accepted solutions are hard to come by.

Shippers swallow higher contract rates to secure capacity
10 Sep 2020
Contract truck rates are rising because shippers are struggling to find available capacity and asking carriers what it will take to get their freight moving.

Rail congestion lingers in LA, but small glimmer of hope
12 Aug 2020
Despite optimism that BNSF Railway’s congestion may ease, intermodal marketing companies expect demand to be high and equipment dislocations to persist through October in California.

Infographic: TMS and broker systems intersecting
25 May 2020
Partnerships between digital freight brokers and TMS providers continue to be formalized, which should benefit shippers looking for extra sources of capacity in their core transportation planning and execution systems.

J.B. Hunt warns of further declines in intermodal volume
15 Apr 2020
J.B. Hunt Transport Services acknowledges a rough second quarter is ahead, while there’s much unknown about how severe the impact of the coronavirus disease (COVID-19) on business conditions will be.

Market uncertainty lifts US trucking instant quotes by double-digits
27 Mar 2020
Digital truck brokers have found it hard to confidently provide an accurate guaranteed rate to shippers 14 or 21 days in advance because of the unpredictable developments of coronavirus disease 2019 (COVID-19), causing one-off quotes to be higher than normal.

Specialized services drove US truckload revenue growth in 2019
10 Mar 2020
Large US truckload carriers that engaged in mergers and acquisitions and expanded specialized services like dedicated trucking fared much better in 2019 than those that relied more on traditional dry-van business, according to JOC's 2020 Top 25 US Truckload Carrier Rankings, prepared by SJ Consulting Group.

J.B. Hunt doubling reefer fleet in search of higher margins
05 Mar 2020
J.B. Hunt Transportation Services, one of the largest US intermodal providers, is making a strong push into the temperature-controlled business by doubling its container fleet in 2020.

Intermodal turnaround not expected until summer
29 Jan 2020
Railroads and intermodal providers say there will be more volume in 2020 than last year, although shipper demand will not fully recover until the second half of this year.

J.B. Hunt, JDA latest to join broker-TMS integration trend
09 Dec 2019
Brokers with digital freight marketplaces continue to partner with widely used TMS providers to give users of those systems direct access to electronic capacity and booking capabilities, while the marketplaces get an influx of direct shippers customers.