Heartland Express is a transportation and logistics services company that offers regional, long haul, and dedicated truckload services to the United States and Canada. Founded in 1978 with headquarters in North Liberty, Iowa, the company reported 2013 revenue of $582 million, up 6.7 percent year-over-year. The company also reported a net income of $70.6 million, up 15 percent from the previous year.

Heartland Express and its subsidiaries employ 5,220 individuals and operate a fleet of approximately 2,400 trucks. The primary industries Heartland serves are retail, manufacturing, automotive, food, paper and plastic, and consumer goods.

Heartland Express, one of the most profitable truckload carriers in the nation, acquired fast-growing Gordon Trucking for $300 million in cash, assets and debt in 2013. The acquisition was expected to give Heartland a more than $400 million revenue boost, with combined total revenue for both companies expected to top $1 billion. GTI’s equipment includes approximately 2,000 tractors and 6,500 trailers.

US Offshore Wind: Where Is the Market Heading?
Learn how IFP Corp uses technology to improve operational efficiency and improve margins
END_OF_DOCUMENT_TOKEN_TO_BE_REPLACED

The US-China Trade War: Where Do We Go From Here?
END_OF_DOCUMENT_TOKEN_TO_BE_REPLACED 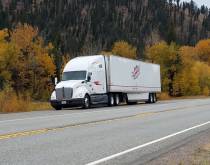 26 Aug 2019
Heartland Express has acquired truckload carrier Millis Transfer and the Millis driving school for $150 million, the second major acquisition the Iowa carrier has made in two years.
MORE »