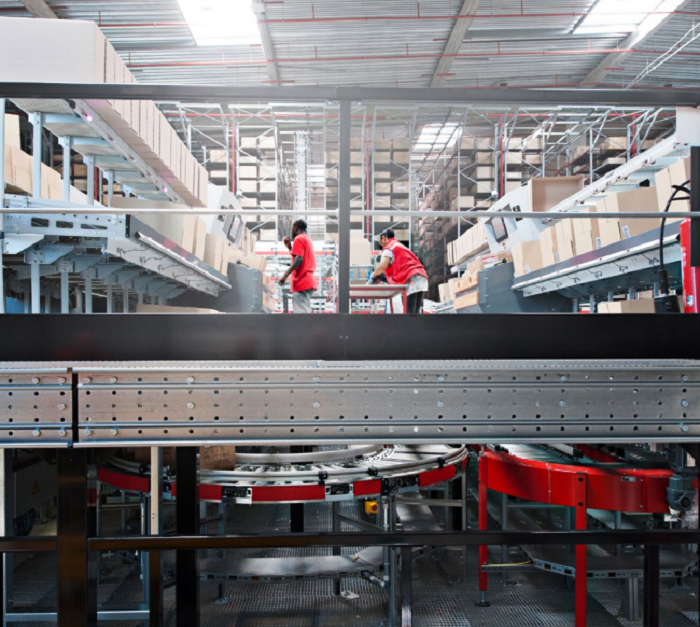 XPO Logistics, which had $15.4 billion in gross revenue last year, will roll out 5,000 “cobots” at contract logistics facilities and warehouses in North America and Europe. Photo credit: XPO Logistics.

XPO Logistics is tossing an automated gauntlet at the feet of competitors with the deployment of thousands of robotic “cobots” in its North American and European warehouses. The decision, announced Wednesday, will dramatically accelerate order fulfillment, the “holy grail” of the Amazon era, as retail business and e-commerce skyrocket in an expanding economy.

The logistics provider, which had $15.4 billion in gross revenue last year, will roll out 5,000 “cobots” at contract logistics facilities and warehouses in North America and Europe. At the same time, XPO is hiring more humans to handle an influx of freight and packages, and building out its physical network of warehouses, fulfillment centers, and last-mile hubs.

A cobot is an autonomous robot designed to collaborate with humans. In this case, those humans are warehouse workers who pick, pack, and sort often heavy products, the company said. Each cobot can move a rack weighing 1,000 to 3,500 pounds, bringing it to a station where a worker fulfills orders, picking goods from the rack and preparing them for shipment.

XPO will be the exclusive user of the robots, built by manufacturer GreyOrange Pte. Ltd., in North America, the United Kingdom, and eight European countries. The deal comes as customers such as Amazon ratchet up fulfillment and delivery demands in advance of the holiday season and as XPO expands its last-mile e-commerce delivery network.

“We’ve developed our logistics technology to integrate the latest intelligent automation and adapt it at lightning speed,” Bradley S. Jacobs, CEO of XPO Logistics, said in a statement. The collaborative robots “will make our logistics operations safer and more productive,” he said, and significantly reduce the order cycle time from receipt to fulfillment within the warehouse.

With the cobots aiding workers, orders which used to take hours to fulfill within a warehouse from floor-to-door can be completed in 20 to 40 minutes, XPO said.

“These are important benefits for our customers — particularly in the e-commerce and omnichannel retail sectors, where order speed and accuracy are essential ways to compete,” Jacobs said. Earlier this year, he named advanced robotics as one of four technology priorities for this year, totaling $450 million.

XPO’s partner, GreyOrange, is a Singapore-based manufacturer with offices in the US, India, Japan, and Germany. The company recently received $140 million in a Series C funding round. The cobot in question is the “Butler.” Rather than a stand-alone robot, the Butler is part of an integrated “goods-to-person” order fulfillment system with several components.

The company opened its US headquarters in Atlanta in August and plans to manufacture and deploy more than 20,000 warehouse robots in the US in the next three years.

The basic job of the Butler, which looks something like a roving scale, is to move specially designed racks filled with inventory to workers, who then pick and pack items. As noted, weighing approximately 1,000 to 3,500 pounds, manual pick rates range between 50 and 80 units per hour. With cobots, that rate could be 200 to 300 units per hour.

Although that sounds like a contemporary version of John Henry versus the steam engine, the goal isn’t to eliminate jobs. The robots will supplement, not replace workers, an XPO spokesperson said. In fact, XPO is increasing hiring as it expands and will recruit 8,000 temporary workers this peak season, a more than 30 percent increase over last year.

“Retail volumes are up about 20 percent year to date and it’s not even peak season yet,” the spokesperson said. Within warehouses, “The robots will help reduce walk time for people by about 80 percent,” he said. “They’ll do the moving back and forth, and they’ll do almost all the heavy lifting. This will be is a tremendous help for employee recruitment and retention.”

XPO will introduce the GreyOrange cobots into workflow at its logistics facilities in Europe and North America gradually. “We’ve been piloting the robots in one of our facilities,” the spokesperson said. “We’ll be rolling them out through the balance of this year and next year.”