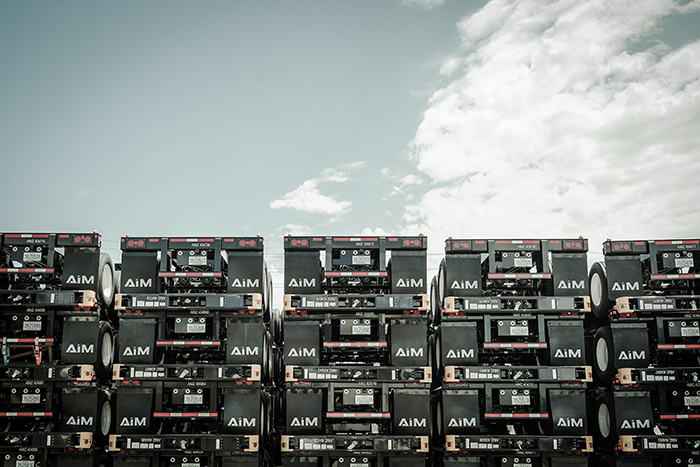 Since its founding in 2016, technology-driven American Intermodal Management, LLC (AIM) has introduced approximately 20,000 new GPS-connected chassis to the US market. Photo credit: AIM.

Whether the US shipping industry is ready to embrace the cost and benefits of so-called smart chassis will become apparent in the coming months as the technology introduced by American Intermodal Management, LLC (AIM) expands nationally via its recent merger with FlexiVan Leasing, the country’s third-largest lessor.

Founded in 2016 by former APL CEO Ron Widdows, technology-driven AIM introduced approximately 20,000 new GPS-connected chassis to the US market, providing users hard metrics on turn times at marine terminals and dwell times at warehouses. That information and other related metrics previously eluded shippers and forwarders trying to improve efficiency of container movements between terminals and distribution centers. The data can be fed into transportation management systems and used for analysis of vendor performance.

Part of the rationale for the merger, Widdows said, is to extend the technology and the value able to be extracted from it into the mainstream of the $1 billion to 1.5 billion US chassis market, where FlexiVan and AIM will have a combined market share of approximately 30 percent. “[AIM] was built from the very beginning with the idea that we would eventually find an opportunity to do what we do in relatively small way on a much larger scale, and Flexi presents us with that opportunity.”

He said the market of chassis users, including large beneficial cargo owners (BCOs), that are able to put equipment location data to productive use will grow over time, and the combined AIM-FlexiVan will cater to that demand.

“There are a growing number of customers who see an advantage in having better visibility and information that says something about their flow, efficiency of their supply chain, and about the performance of the people they rely on for service such as carriers, terminals, motor carriers, [and] distribution centers. The ability to develop some insights around that translates into an improvement in cost structure and efficiency,” Widdows said in a January interview.

The expansion of location data from chassis comes at a time when visibility data originating from other assets — e.g., ships, trucks, and containers, among other sources — is being pulled into data pools in real time. That’s achieving new levels of visibility for customers, which in turn is increasingly facilitating decisions, some of which are aided by machine learning and artificial intelligence. A new breed of startups, such as project44 and FourKites, is active in this area, but visibility — especially making that data relevant for decision making — has become a horse race participated in by ocean carriers and third-party providers that want to maintain close relationships with customers and avoid being disintermediated.

The US chassis sector has been in the throes of transition over the past decade, ever since ocean carriers began withdrawing from direct chassis ownership and selling fleets to major lessors such as FlexiVan and larger competitors Direct ChassisLink, Inc. (DCLI) and Trac Intermodal. As a result, those equipment providers have begun leasing chassis on a daily or short-term basis, turning what had been more of a passive business based on leasing large fleets to carriers into a retail, transactional operation.

Lessors’ purchase of carriers’ chassis fleets was contingent upon carriers guaranteeing chassis business to the lessors, so in that sense, the transition to an open business model for the lessors was never fully completed.

Widdows said that model — also referred to as “box rules” — is likely to continue for the foreseeable future.

The carrier haulage, merchant haulage (CHMH) “structure is probably still [going to be around] around for some time,” he said. “While the carriers exited from chassis ownership [in terms of] providing their own chassis under carrier haulage, and while there have been efforts by the ocean carriers to reel back the amount of store-door they do, it’s still a requirement in the marketplace because of competitive factors.

“Some carriers believe being more engaged in providing extended services is the right thing to do. Other carriers have been more focused on reeling that in due to the costs involved, which are hard to fully cover,” Widdows added.

Under the transaction, announced on Jan. 27, I Squared Capital, the owner of AIM, will take a controlling interest in the combined FlexiVan-AIM business while Castle & Cook, which owned FlexiVan, will take a minority interest. AIM had been built as a non-pool provider, while FlexiVan has operated within chassis pools. Widdows said the combined entity would play in both environments.