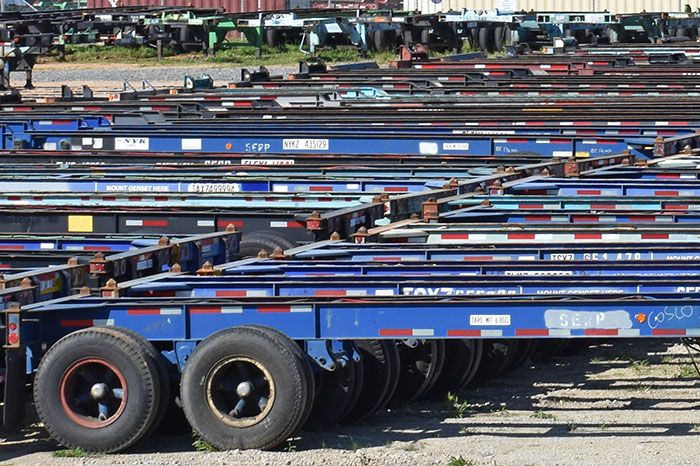 TACOMA — The inability to ensure the availability and roadability of chassis has prompted a former carrier executive to propose a “utility” arrangement in which the port or hub operator would set prices and ensure adequate supply.

Bill Rooney, vice president of strategic development at Kuehne + Nagel and former president of Hanjin America, said the chassis utility model would be based on the full interoperability of chassis, which would save money for shippers and truckers while setting compensatory rates for equipment operators who contribute chassis to the grey pool.

Chassis models vary widely at ports such as Los Angeles-Long Beach, New York-New Jersey, Norfolk, and at inland hubs such as Chicago and Memphis. The one common thread at all these locations is that, “Truckers and shippers are getting screwed,” Rooney told the annual meeting of the Agriculture Transportation Coalition. The chassis utility model would be structured like that of the Port of Virginia, where the port authority leases equipment from a variety of sources and then handles the rates and billing itself.

For more than 50 years, from the beginning of containerization in 1956 until the emergence of “grey,” or neutral, chassis pools in 2009, the equipment arrangement was the same throughout the US. “Carriers bought the chassis and gave them away for free to attract business,” Rooney said. Then, carriers went almost full circle by renting back the chassis from the equipment providers and offering them at discounted rates, once again to attract business, he said.

Faced with chassis shortages during peak periods, poorly maintained equipment, and increasing prices, shippers and truckers at a number of ports and inland rail hubs are forming coalitions, demanding action from port authorities and hub operators, while experimenting with new models.

The ports of Savannah and Charleston in February 2018 reached an agreement with carriers to form the Southern States Chassis Pool. The pool would have been operated by the North American Chassis Pool Cooperative, which would charge a flat fee for chassis, but the arrangement was suspended this April for at least three years when the two ports said it was probably “too aggressive.”

In Los Angeles-Long Beach, the three large national independent equipment providers (IEPs) — TRAC Intermodal, Direct ChassisLink Inc., and Flexi-Van Leasing — have been operating the “pool of pools” since 2015. While cargo owners and truckers say the interoperable pool of pools is an improvement over the pre-2015 period when truckers wasted time and lost money repositioning chassis that were not interoperable, the system broke down during high-volume periods, such as last winter. Port stakeholders determined that continued carrier involvement in determining which chassis must be used for carrier haulage contributed to chassis shortages that rippled throughout the supply chain.

Ongoing chassis disruptions in Memphis motivated local interests to form the Memphis Supply Chain Innovation Team as part of a Federal Maritime Commission (FMC) fact-finding investigation into detention and demurrage issues. Shippers, carriers, railroads, truckers, and chassis pool contributors in the mid-South produced a white paper that issued suggestions similar in some ways to Rooney’s proposal for a chassis utility.

The closest existing model to what Rooney suggested is run by the Virginia Port Authority (VPA). John Reinhart, VPA executive director, says having all port users on board with the pool gives the Virginia ports a “competitive advantage” on the East Coast.

Rooney said he envisions a chassis utility model being established by the ports — be they operating ports such as in Virginia or landlord ports like New York-New Jersey and Los Angeles-Long Beach — or inland hub operators, which can act as facilitators within their respective communities.

The chassis utility model would require FMC approval, he said. Every chassis within the pool would be interoperable for all users, which would negate the need to “flip” containers from one chassis to another at the direction of ocean carriers because of arrangements they have with the IEPs.

In order to work, however, the chassis utility board “must set the rates” to ensure they are compensatory for the asset owners that contribute chassis to the interoperable pool, Rooney said. Ultimately, the IEPs would have to sign on to a new arrangement too, which occurred in Virginia, but was blocked by TRAC Intermodal and Direct ChassisLink Inc. in Memphis this March.

Bill Rooney of course has the

Permalink Submitted by ferrullig@minds... on Jun 13, 2019 11:41AM EDT
Bill Rooney of course has the right answer, the question always in container shipping is do the parties implement the right answer? Rarely, unfortunately. This issue is over a decade old in the US and it is still a patchwork quilt of solutions with nothing resembling a workable model and solution. Now, if all could just let Bill make the final decisions and then implement them -------.

The chassis shortage and

Permalink Submitted by shannon_orellan... on Jun 14, 2019 10:08AM EDT
The chassis shortage and condition is a challenging problem. Not only is there a shortage but the use of 10/20 tires on a split rim that were never constructed to run over 50 MPH, the process of finding vendors, and the problem of putting these repairs back on the trucking companies. Regulating new groups is just the start.

I think it is important to

Permalink Submitted by sshoemaker@amer... on Jun 14, 2019 11:09AM EDT
I think it is important to note that the carrier the author is referring to is the ocean carrier, who has no trucks and has pushed this problem off on to the trucking companies. Also running a 10/200 tube tire is antiquated. Ultimately this problem will probably result in the trucking company owning their own chassis, but the problem of the chassis split still needs to be addressed to compensate the driver and carrier for moving the chassis between points of where the inbound container comes from and where the empty container is returned to and back to the rail or port.

Global Shipping Outlook: A Sneak Peek at 2021
Port Performance North America: Managing Cargo Flow During a Pandemic — and Beyond
END_OF_DOCUMENT_TOKEN_TO_BE_REPLACED