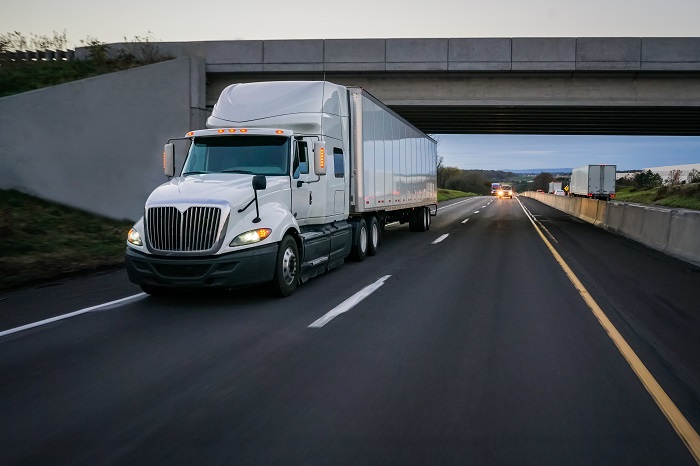 Above: A truck travels on a US highway. Photo credit: Shutterstock.com.

WHITE SULPHUR SPRINGS, West Virginia — Tradition matters in the trucking industry, but transportation and supply chain professionals looked at what’s happening today and will occur soon rather than reminiscing in the past.

Technology and electronic logging devices (ELDs) were the top two themes on the first day of the SMC3 Connections conference at the popular Greenbrier resort in West Virginia. Blockchain, data security, and reverse logistics were the buzzwords. The ELD mandate and pending legislation on Capitol Hill affecting the trucking industry has the more immediate impact on truckers across the United States.

Most truckers have ELDs, honor regulations

The Federal Motor Carrier Safety Administration (FMCSA) reports that more truckers are following the law than in the past, even those who might have grumbled about ELDs. Nearly 17 percent of drivers were cited for a record of duty violation, but the number dropped to 9.5 percent this year. Out of more than 417,000 inspections through early May, 8.5 percent received a 395.22A code violation that put a carrier out of service and counted against safety scores after April 1, although the rate dropped under 1 percent after hard enforcement.

“We tried to have a performance-based regulation to allow as much flexibility in design as possible so [there could be] low-cost solutions for small fleets. It wasn’t the initial fear that the price would be $1,000 or pay a monthly service fee. A lot of fleets realized you can achieve compliance and it won’t bankrupt you,” said Larry Minor, FMCSA’s associate administrator for policy.

The agency also reported that the number of hours-of-service (HOS) violations have dropped this year. In May, 0.64 percent of inspections revealed a violation whereas the number was 1.31 percent in the prior year. In fact, the violation rate was more than 1 percent throughout 2017 but has been less than 1 percent every month this year.

Ultimately, though, the point of HOS and ELDs is to prevent fatal crashes. That is how the public will know whether these regulations have been successful. It will require reviewing crash data on fatigue-related non-fatal and fatal crashes, removing other troubling causes such as texting, to see if there is a decrease.

The HOURS Act, introduced in the US House of Representatives last week, would fix a patchwork of laws on the agricultural exemption on HOS that differ state by state and establish a national standard of an exemption for 150-air miles from the load’s source. It would also harmonize the shorthaul exemption across the board to within 150-air miles on a 14-hour workday. Currently the radius for a driver is 100 miles for a driver with a commercial driver’s license (CDL) and 150 miles for those without one.

“If you’re an over-the-road driver you have the 14 hours on duty, but if you use the shorthaul exemption you only have 12 hours. We want to make it consistent, eliminate separate operating rules on shorthaul and longhaul, CDL drivers and non-CDL drivers,” said Dan Horvath, American Trucking Associations director of safety policy.

US Reps. Rick Crawford and Bruce Westerman, both Republicans from Arkansas, and US Rep. Sanford Bishop, a Democrat from Georgia, co-sponsored the bill that goes to the Transportation and Infrastructure Committee.

The phrase was invented by Brian Glick of chain.io to describe the buzz by simply repeating the word blockchain without any detailed discussion about applications in the transportation industry.

Craig Fuller, managing director of the Blockchain in Transport Alliance, asked the skeptics of blockchain to watch the now famous January 1994 clip of Katie Couric and Bryant Gumbel asking "Today Show" producers from NBC what the internet was and how to pronounce the ‘@’ symbol in an email address. His point was that people will eventually learn what blockchain can and cannot do in the business world and it will eventually become commonly understood.

Much of the discussion revolved around smart contracts, a self-executing business agreement recorded in a blockchain ledger without the use of a third-party. Stephen Rogers, IBM’s vice president of supply chain transformation, described how these contracts create an immutable agreement between different parties.

“Why should businesses be interested? Because it will save time. Those smart contracts eliminate the debate over whether the bet was for $10 or $100, and we have to go [to] witnesses who were in the room at the time and [ask] what did they overhear. All of that goes away and these time-consuming disputes are no more,” he said.

IBM is working with ocean carrier Maersk Line and Walmart on how to apply blockchain to their supply chains. Eventually these tech providers hope that blockchain may be used in a complex transaction using container ships, railroads, and drayage. Being able to integrate the small company, such as a drayman or owner-operator, will be critical to covering the entire transportation network because trucking is a decentralized industry.

“Small companies buy software generally. They don’t build it themselves. And the software providers will integrate blockchain. We’re already talking to drayage software providers about how [to] build blockchain into some of their products,” Glick said. “What does the owner-operator have to do? Nothing. The apps on their phones are going to become blockchain enabled behind the scenes.”