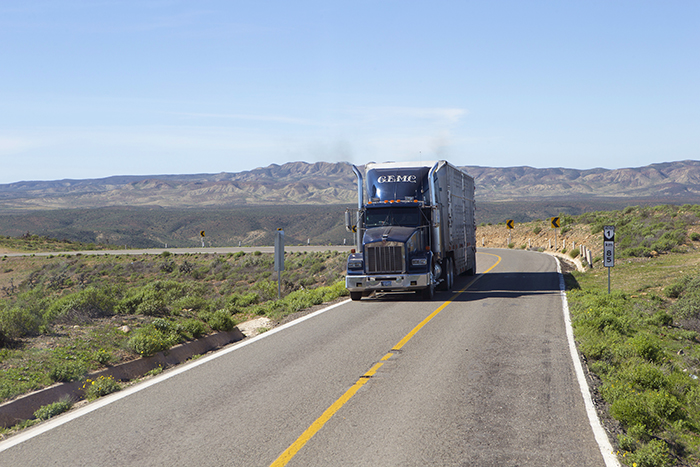 New hours-of-service regulations in Mexico have reduced the time truck drivers can be behind the wheel to no more than 14 hours a day, with mandated 30-minute breaks every five hours. Photo credit: Shutterstock.com.

Tightening Mexican truck capacity fueled by new regulations cutting down on how long drivers can stay behind the wheel and at loading docks is pushing up rates, with some users reporting increases of more than 10 percent.

Transportation executives said capacity dropped by double digits after the new rules, which limit trucker work days to no more than 14 hours — with mandated 30-minute rest breaks every five hours — went into force six months ago. Once their hours expire, drivers are required to take an eight-hour break. That added to existing pressure on the nation’s trucking capacity that stemmed from a driver shortage and a June 2018 rule mandating new certification and inspection requirements for double-tractor trailers, which are a key component of many transportation plans in Mexico.

The tightened capacity made it especially difficult for some shippers to find trucking coverage in more remote areas of the country, forcing shippers and truckers to plan cargo moves farther in advance and pay way over the odds to ensure their cargo arrived, container line executives told JOC.com. One trucker said the lack of drivers has stunted his company’s fleet growth and investment, for fear of buying trucks for which he can’t find an operator.

Jorge Monzalvo Diaz, head of delivery, Middle America area, for Maersk, said shippers have found it difficult to get transportation from the southern portion of the country to anywhere north of central Mexico, including runs to the border, because truckers felt the hours-of-service (HOS) rules made those hauls far less profitable. According to Diaz, truck productivity across the country has fallen from approximately 2.4 turns per week down to just 1.8 turns per week, and truck rates rose by 10 to 15 percent in the last year.

For example, the 312-mile trip from the Port of Lazaro Cardenas in the south of Mexico to Leon, on the edge of the Bajio region, in the center of Mexico, takes about six-and-a-half hours, making a return trip possible in one day. But the 715-mile trip to Monterrey, in the north of Mexico, from the same port takes about 12 hours, meaning drivers would have to take an eight-hour break before returning.

“We saw several trucking lines rejecting regular services to the Northeast, which is heavy on consumption of transportation. They decided to concentrate their capacity around the Bajio and Central Mexico [area] in order to optimize their turns,” Diaz said, referring to the country’s central region in which much of the country’s manufacturing sector is located.

During last year’s peak season, some shippers paid as much as $500-700 extra — about 30-40 percent above regular rates — in order to secure the capacity, he said. That capacity tightness was temporarily worsened in January by a four-week blockade of rail lines into the ports of Manzanillo and Lazaro Cardenas, preventing shippers from sending cargo by rail and spurring many of them to turn to trucking haulage.

Still, the full impact of the new rules has been muted so far, in part because they haven’t been enforced vigorously, Diaz said. The fact that drivers document their hours on paper, rather than electronically as in the United States, also diminished the impact, he said.

Even without tougher enforcement, the Mexican capacity crunch is likely to grow due to increasing demand for cargo transportation. Total loaded cargo volumes through Mexico’s ports grew 8.7 percent in 2018 to more than 5.01 million TEU and are up another 7 percent year over year in the first two months of 2019.

It’s also unclear how rigorously drivers could adhere to the HOS restrictions even if they wanted to. Trucker groups say the country has too few rest areas in which trucks can stop, and the government has yet to fulfill a commitment it made last year to compile a list of such stopping points. The issue is particularly important given the high levels of freight robberies in Mexico, as stopping a truck in the wrong place — even a rest area — could increase the chance of a theft.

Carlos E. Ortega Garcia, director of traffic and imports at Grupo Axo, an importer of retail goods into Mexico, said he expects truck rates to rise 10 percent this year, only slightly more than the 5-8 percent increase he would expect in a typical year, as a result of hikes in road tolls and fuel prices, among other factors. An executive from the Mexican office of one ocean carrier gave a similar estimate, saying that trucking rates have risen 5-10 percent in the last year, a trend he expects to continue in the next 12 months.

But another ocean carrier executive said trucking rates have increased by 50 percent since 2016, with an increase of about 30 percent in the last year. He estimated that the HOS rules reduced capacity by 10-15 percent, but said they were necessary to create a level playing field for operators that had already set limits on driving hours for safety reasons.

Because it takes longer to find trucking services, the carrier has had to demand shippers give more advanced warning about freight moves, the executive said.

“We used to ask a customer for a window of 48 hours,” he said. “We're now at 72 hours. And some customers are advising us 96 hours in advance because they really, really want to make sure that they get it.”

Victor Salazar, director of ALA Transportation, said the direct effect of the rules on his 900 drivers was minimal because ALA five years ago enacted internal rules similar to the federal regulations enacted last year, limiting their drivers’ time at the wheel for safety reasons. Even so, the tightened trucking capacity has made it tough to find new drivers and curbed the company’s investment and growth plans, he said.

“Before we were more aggressive because we knew we could find drivers quickly,” said Salazar, who estimated that the [HOS] rules cut the distance that a driver could travel in one day by about 14 percent and by 7 percent on a short route. “Now we are more conservative, just so we can be sure we can put the truck to work,” he said.

Salazar estimated that ALA’s business has grown 15 percent a year over the last five years, but would grow at a 20 percent rate if there were enough drivers. The company also is slower to take on new business as a result of the shortage, he said. In the past, ALA would allow two to three months to prepare for a new contract that could grow business by 10 to 15 percent. Now, the company would need five to six months to ensure that it could find enough drivers, he said.