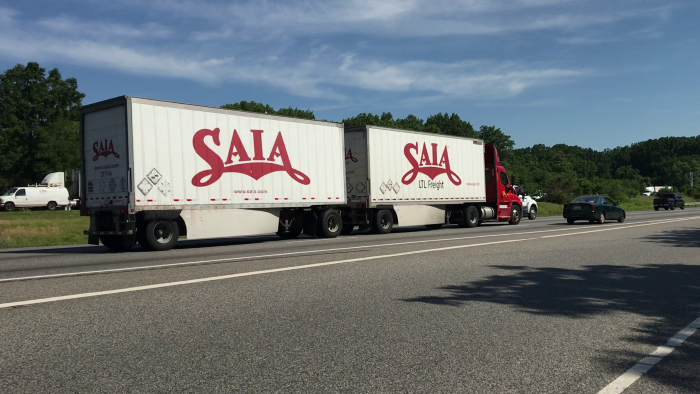 Saia’s latest terminal is in Syracuse, New York. The carrier will open six more centers in the second half of the year. Photo credit: Ari Ashe/JOC.com.

Expansion into the Northeast helped fuel growth in second-quarter revenue and profit at Saia, a multiregional less-than-truckload (LTL) operator based in the Atlanta area. The LTL carrier has opened three terminals in the Northeast this year as part of an expansion begun in 2017.

Saia’s 8.3 percent increase in revenue, 3.6 percent uptick in shipment volume, and 22.4 percent leap in net profit demonstrate how solidly profitable trucking companies can sustain and expand profits and add and expand shipper services even in a weak freight economy.

The company will open six terminals, five of them in the Northeast, in the second half of the year, company officials said in a July 31 earnings call. That expansion comes at a time when many analysts and observers would more likely expect retrenchment.

The carrier’s second-quarter performance also emphasizes the growing distance in 2019 between the LTL and truckload sectors. LTL carriers are managing to improve operations and balance sheets, despite the loss of heavier freight to the cheaper truckload market.

They’re doing so by keeping a sharp focus on operating costs and pricing that cuts less profitable freight from their networks, and by building density in their most profitable freight lanes. That compares with the old method of using deep discounts to grab freight.

“We’ll continue to push the incrementals,” Frederick Holzgrefe, Saia’s president and COO, told analysts during the conference call, transcribed by Seeking Alpha. Saia will continue to expand its network, as its LTL demand challenges capacity.

Saia built three terminals in the Northeast in the first half, but also swapped a leased facility in Harrisburg, Pennsylvania, for a larger, owned facility. That gives Saia “plenty of capacity for growth,” Holzgrefe said. “Capacity for growth” is a term rarely heard in trucking these days.

In addition to the six new terminals planned for the second half, Saia will relocate another three terminals “in markets where we have simply outgrown our current capacity,” he said.

Saia also is benefiting from a market realignment in the Northeast following the sudden collapse in February of New England Motor Freight, long one of the largest LTL carriers in the region. NEMF moved both intraregional and interregional shipments in the Northeast.

Less tonnage not a bad thing

Some investment analysts attributed the reduction in weight per shipment and tons to an increase in e-commerce shipments handled by Saia and other LTL carriers. But that lightening of the load also reflects truckload shipments siphoned away from LTL by low spot prices.

Transportation consultant Satish Jindel, president of SJ Consulting Group, thinks concern over the decline in LTL tonnage is misplaced. The goal for LTL carriers is to “cube out” a trailer, to fill as completely as possible, rather than “weigh out” with heavier freight and empty space.

“You don’t deposit tons in the bank, so why worry about tonnage?” he said.

Practically all of the public LTL carriers last year reported an influx of heavier partial truckload shipments as capacity in that sector tightened. With excess capacity in the truckload spot market, and spot rates at 2017 levels, that freight has fled the LTL space this year.

The 6.7 percent average price hike in annual contract renewals seems high compared with what shippers tell JOC.com they are giving their LTL carriers in negotiations. “We’re not assuming we’re going to be able to achieve those types of increases forever,” CEO Rick O’Dell told analysts. LTL pricing is stable, he said.

Global Shipping Outlook: A Sneak Peek at 2021
Port Performance North America: Managing Cargo Flow During a Pandemic — and Beyond
END_OF_DOCUMENT_TOKEN_TO_BE_REPLACED