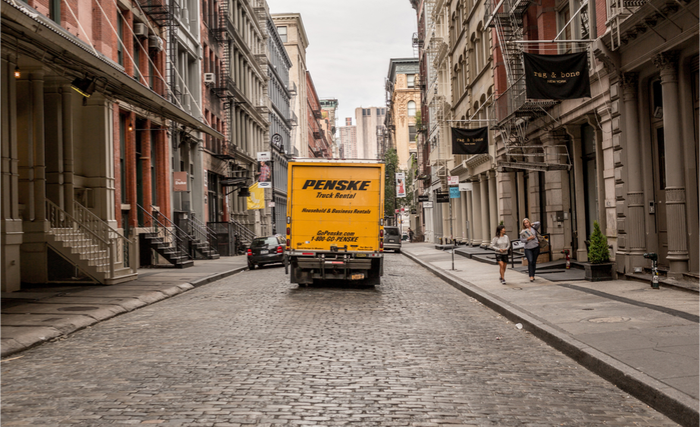 Truck drivers delivering retail goods and food into New York City say that any fee for entering a new "congestion pricing" zone will end up in the hands of the shipper. Photo: Shutterstock.com.

Truckers already saddled with an $18 per axle toll to cross the George Washington Bridge into New York City are nervously watching a proposal to create another toll, this one to be paid for entry into special “congestion” zone in the city.

Ultimately, shippers and cargo consignees will be on the hook for a toll aimed at deterring vehicles from entering the congestion zone, stretching from 60th Street to the bottom of Manhattan. Through the plan, approved by the state legislature March 31, New York Governor Andrew Cuomo says $15 billion will be raised for New York City Subway. The exact amount of the proposed toll has not been set, but early discussions pegged it at about $25 per truck.

Marine containers from the Port of New York and New Jersey rarely enter the zone due to the intense traffic, and most cargo is transloaded into smaller trucks for delivery there. Still, truckers that serve both the port and the city say the congestion toll would be another burden.

In an area of already high road tolls — for example, it costs $27.60 to drive 50 miles on the New Jersey Turnpike from the Central New Jersey warehouse district to New York City — the additional fee would almost certainly have to be passed on to shippers, truckers say.

"We do a huge amount of work, [with] major clients over there” in the congestion zone, said Steve Schulein, vice president of drayage and industry relations for North Bergen-based National Retail Systems, referring to work done by the company’s domestic truck arm. “Ultimately, you have to pass the cost on. You can’t eat this stuff.”

Congestion pricing, already implemented in London, Stockholm, Singapore, and Milan, is another example of how the density of major port cities is adding pressures to freight movement — whether it be space shortages, resident pushback to expansions and new projects, or local vehicle traffic. Warehouse space is at a premium in and around New York, as at other ports, as shippers and logistics providers vie for space with e-commerce retailers looking for locations from which to send last-mile deliveries.

The vacancy rate in the Meadowlands, New Jersey, for example, about 10 miles from New York City and the port, was just 3.2 percent in the first quarter of 2019, with an average rent of $11.00 per square foot, according to Cushman & Wakefield. By comparison, the vacancy rate nationwide stood at 5 percent and the average rental rate nationwide was $7.24 per square foot during the quarter, according to Newmark Knight Frank, a commercial real estate services company.

About 90 percent of freight moves in and around New York City are handled by truck, according to city officials, which last year launched a $100 million plan to remove trucks from the roads, in large part by increasing the amount of freight that goes by rail and barge. Officials expect to see a 68 percent rise in cargo traffic in and around the city by 2045.

Much of that will come from the Port of New York and New Jersey, which experienced a 6.6 percent increase in loaded cargo in 2018, to 5.01 million loaded TEU. The port expects cargo volumes to double by 2030.

Efforts to shift cargo from trucks to rail and barge will have little impact on truck levels in the congestion zone, however. Unlike with passenger vehicles, for the trucks serving Midtown and lower Manhattan — primarily delivering retail goods, food, and other perishables — there is no alternative delivery mode, said Kendra Hems, president of the Trucking Association of New York, which is closely watching the plan.

Pricing details for the congestion zone will be determined by a six-member panel created by Cuomo, who has set a goal to have the zone in place by November 2020, said Hems.

The association, whose membership includes major motor carriers such as UPS, FedEx, and YRC Worldwide, is pushing for trucks to receive credits for paying bridge tolls that would offset the congestion pricing fee. At a minimum, trucks should pay no more than cars, she said.

Truckers, meanwhile, argue that they shouldn’t pay anything, given that they have no choice but to enter the zone to deliver goods to businesses there.

“It’s going to have a large impact, because it’s a double-bang,” said Anthony Berritto, president and CEO of Salson Logistics, in Newark, New Jersey. He said his trucks visit about 800 stores a day in New York and pay about $500,000 a month in tolls.

“We pay for the tolls already, but now they want us to pay the congestion fee,” he said. “I’m already paying $40 or $50 to cross the George Washington Bridge … We are waiting to see what happens.”