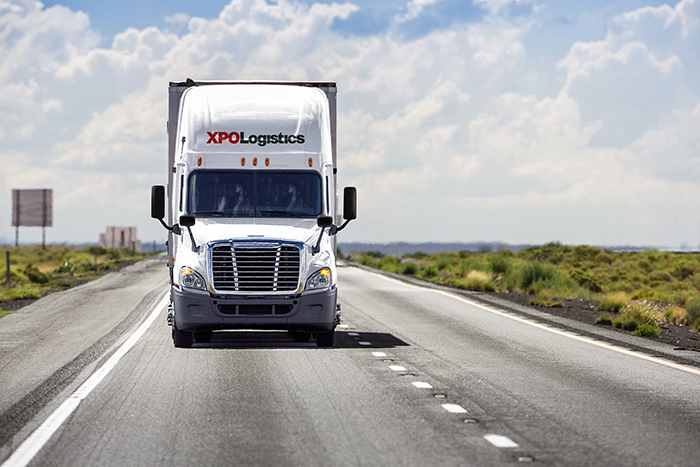 LTL volumes dropped 20 percent in April, but have "stabilized" in early May, the company said. Photo credit: XPO Logistics.

A few months ago, XPO Logistics was considering the sale of practically all its non-less-than-truckload (LTL) businesses. The company must be glad that didn’t happen.

“E-commerce saved us in April, frankly,” chairman and CEO Bradley S. Jacobs said in a first-quarter earnings call with Wall Street analysts Tuesday.  “It was our strongest performing vertical across the board. It was actually going up and most everything else was going down.”

The COVID-19 pandemic buried XPO’s sale plans and underscored the importance of a diversified portfolio of services to transportation and logistics providers, especially a portfolio that includes e-commerce fulfillment. That’s true for XPO and companies such as Arcbest, which also increased its e-commerce business in the first quarter.

The economic meltdown caused by the coronavirus disease 2019 (COVID-19) slashed both LTL and truckload freight volumes in March and April, but e-commerce shipments spiked as US consumers began buying more goods online for delivery to their homes.

Organic revenue at XPO’s US last-mile delivery business increased 9 percent in the first quarter, a “standout” performance, according to Jacobs. “It’s not a cyclical phenomenon, in our opinion, as much as a secular phenomenon,” he said, meaning he thinks it will be permanent.

“We expect some of these behavioral changes that are taking place during the pandemic to continue post-pandemic,” Jacobs said. “It's a great business to be in right now.” And XPO has e-commerce exposure through its US last-mile and European fulfillment networks.

The last-mile business, overall, experienced a year-over-year decline in revenue, from $224 million a year ago to $201 million, thanks to the loss of a major customer in the first quarter of 2019. The 9 percent top-line expansion Jacobs cited excludes that revenue loss.

Altogether, XPO’s revenue dropped 6.2 percent year over year in the first quarter to $3.9 billion. Corporate net profit fell from $132 million in the year-ago period to $81 million.

Financially, XPO did well in asset-based LTL, increasing its operating profit by 32 percent to $128 million and pushing its adjusted operating ratio down to 83.4 from 87.6 a year ago. Volumes were off only 4.2 percent in the first quarter from a year ago, but plunged in April.

“We're firing on all eight cylinders in LTL,” Jacobs said. “The problem is the industrial economy is not open for business yet.” Tonnage in April dropped more than 20 percent, but has stabilized, he said. There were weeks in March and April when all of XPO’s color-coded metrics were red.

“They started turning yellow, and they started turning green, so they are stabilizing toward [our] forecast,” said Jacobs. “I do believe we'll get to $1 billion of [earnings before taxes, etc.] in LTL, whether it’s next year or the following year. It’s too early to confidently predict that.”