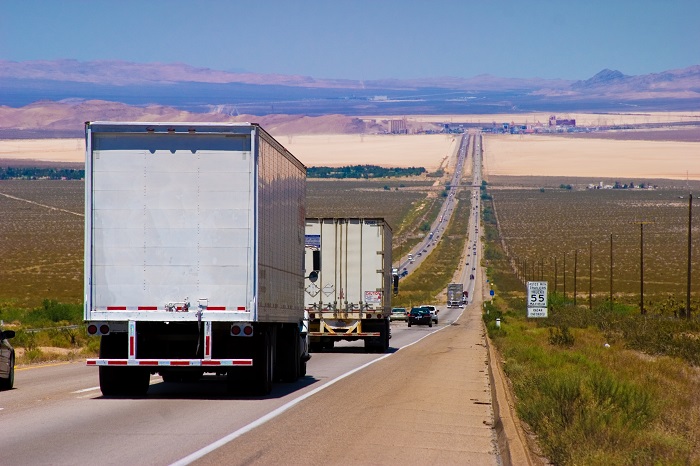 The strong showing by the large US trucking companies should allay some concerns raised by falling spot market truck volumes and rates in September and October. Photo credit: Shutterstock.com.

The widely reported US freight slowdown at the end of the third quarter was no drag on two of the largest US truckload and less-than-truckload (LTL) motor carriers. Truck shipments rose for Landstar System and Old Dominion Freight Line (ODFL). At Landstar, truckload volume rose 7 percent year over year and set a third-quarter record, while revenue rose 27 percent to $1.2 billion.

LTL shipments and tonnage at ODFL rose 9.7 percent and 8.1 percent, respectively. Total revenue and LTL-only revenue both increased 21.2 percent from a year ago, with total revenue reaching $1.06 billion. That 21.2 percent growth rate is well above the 14 percent average growth in LTL industry revenue projected for 2017 by Bloomberg Intelligence.

That’s a sign the freight surge of 2018 still has “legs,” as Bloomberg Intelligence senior analyst Lee Klaskow says, as what’s been a remarkable year for shippers and transportation and logistics companies enters its last months. A surge in e-commerce, as well as potential preordering of what usually would be first-quarter freight from Asia, could set off freight fireworks before the New Year.

The strong showing by the large trucking companies should allay some concerns raised by falling spot market truck volumes and rates in September and October. Dry van spot rates hit their low mark to date in 2018 in the week that ended Oct. 20, with the national average spot rate dropping 2 cents to $2.11 per mile, according to load board operator DAT Solutions.

Motor carrier earnings and operational statistics entered a period of tougher year-over-year comparisons in September — a year after hurricanes Harvey and Irma hit Texas and Florida. The resultant relief freight demand combined with a surge in overall US economic activity and the electronic logging device (ELD) mandate to constrict capacity and send pricing soaring.

Freight patterns also have been more unpredictable this year, with January and February proving to be strong months for truckload freight and June and July peak months for US imports, rather than August. One explanation is the “pulling forward” of imports at certain points this year to avoid US tariffs imposed on goods from China, Mexico, Canada, and the European Union.

There is no doubt that trade policy uncertainties resulted in front loading of shipments this summer, speakers at the JOC Inland Distribution Conference in Chicago said Tuesday. In at least seven of the past 10 years, August was the peak import month, but this year, for the first time, the peak fell in July, said Daniel Hackett, partner at Hackett Associates.

“Trade policy uncertainty compelled retailers, wholesalers, and to a lesser extent manufacturers to front-load cargo flows into US,” Chris G. Christopher, Jr., executive director of US and global economics at IHS Markit, said at the JOC Inland Distribution Conference. “The US economy is doing well, but there are waning effects of fiscal stimulus” from corporate tax reform, he said.

That waning is likely to become more apparent later in 2019 and 2020, speakers said. "We’re extremely bullish on the freight markets,” said Klaskow. Some people, especially on Wall Street, “think that we have peaked in trucking rates. We don’t think that we have peaked yet. We think we will peak in 2020.” Rate hikes, however, will be more moderate in 2019, he said.

The consensus among the speakers at JOC Inland is that growth in international and domestic freight volumes will moderate noticeably next year, although the strength of the US economy will continue through 2019 and will still produce higher freight volumes and rates next year.

The year-over-year gains did slow over the course of the quarter, with truck loadings rising 12 percent month over month in July, 8 percent in August, and 2 percent in September. Truckload capacity is more generally available than earlier in the year, but even so, September truck loadings were up 11 percent year over year, he said, according to a Seeking Alpha transcript.

“We haven’t hit the peak,” Gattoni said. “Mid-November is really when things start to take off for us. … We anticipate a peak like last year, though, [with] very, very strong demand coming back into the market,” he said. “Don’t get me wrong, it’s still pretty strong now; it’s just you see the slight softness coming to October as it relates to [spot market truckload] rates.”

ODFL also noted slower volume growth on a sequential, quarter-to-quarter basis, although annualized growth was high. From the second quarter, LTL shipments per day increased 1.4 percent, compared with a 2.7 percent average sequential increase over the past 10 years. As that growth slows, however, increases in freight rates are pushing overall LTL revenue higher.

CEO Greg C. Gantt remains confident in US economic growth heading into the fourth quarter and 2019. US real GDP increased 4.2 percent in the second quarter, and the latest GDPNow estimate from the Federal Reserve Bank of Atlanta places third-quarter expansion at 3.6 percent. The White House Thursday said it expects 3.5 percent growth.

“We haven't seen anything at this point, be it the macroeconomic numbers that we look at or customer feedback that would suggest any kind of slowdown,” Gantt told analysts in an earnings call transcribed by Seeking Alpha. “We continue to say we expect a strong year into 2019,” Adam Satterfield, chief financial officer at ODFL, said. In October, he said, shipments were trending 6 percent higher than a year ago.

“We're optimistic about next year, the year-over-year [growth], because of the tough comparisons, may not look as good, but we think our opportunities for continued growth and for improving margins are still there and we're looking forward to a strong 2019,” said David Congdon, executive chairman of ODFL, said.