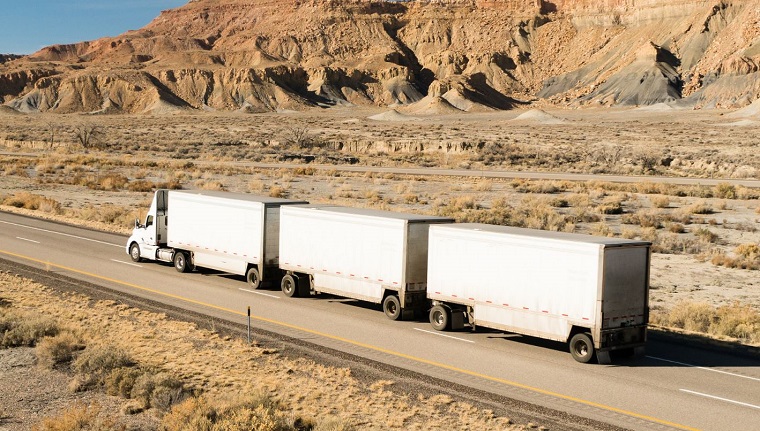 US railroads and safety advocates are united in opposition to allowing the new, longer twin 33-foot trailers, while the trucking industry is split. Still, the players pushing for the change are large, well-financed, and politically savvy. The current truck driver shortage lends more credibility to their argument. (Above: A tandem truck travels in the United States.) Photo credit: Shutterstock.com.

In the United States, federal regulations regarding the size and capacity of heavy-duty trucks haven’t changed since 1982. But in recent times a proposed change in the length limit for trucks has surfaced more than once. The chances of implementation, while still small, are improving.

The push currently under way seeks to modify the federal truck size standards to permit the operation of twin 33-foot trailers, up from the current 2 x 28-foot configuration. Elements within the trucking industry are working to add a rider to the upcoming “must pass” Federal appropriations bill funding the government that would permit the operation of twin 33-foot trailer rigs. The “Twin 33” drive is being driven by big trucking and e-commerce players (and big intermodal customers) such as UPS, FedEx, and Amazon.

Since the proposed change would only affect the size of the trailers and not the total permitted weight of the rig, the configuration would only be suitable for low-density freight. In practice, this would limit users of Twin 33s to parcel and less-than-truckload (LTL) carriers for the most part as well as a small segment of truckload shippers whose “popcorn freight” “cubes out” the trailer before it “weighs out.”

The LTL and parcel carriers are pushing the new configuration because, unlike with heavier trucks, it’s the carriers who would benefit from the change and not (directly) the shipper. The pricing of parcel shipments won’t change when the new Twin 33 regulation goes into effect, so the carriers would get to keep the operational savings.

The move from 28-foot to 33-foot trailers represents an increase in capacity of about 16 percent. Looking at it another way, 14 percent fewer trucks would be required to move the same amount of freight. Of course, this would also mean 14 percent fewer drivers, a significant consideration given the current shortage. With e-commerce driving a huge increase in parcel and LTL shipments, the savings would be significant.

Truckload motor carriers are fighting the proposed change because they fear that LTL carriers will use the economics of Twin 33s to poach cube-oriented truckload shippers. The truckload carriers would be reluctant to invest in such units because they would only be useful for cube cargo and would significantly impair the efficiency inherent in operating a uniform, “go anywhere and haul anything” fleet as they typically do today.

What would the change mean to the railroads and intermodal? In truth, not much. Effects on the carload side would be miniscule, as there is almost no crossover between any form of rail carload and the markets that would be served by Twin 33s. Perhaps a minor amount of cube-oriented boxcar traffic might shift to the highway, but probably it would be so small as to be lost in the rounding.

The effect on intermodal would be a little bit more significant. Over the past 12 months, intermodal has handled about 260,000 28-foot pup trailers. This was about 2.9 percent of all domestic moves and about 1.4 percent of total intermodal volume. That’s something, but hardly a game changer.

Moreover, in this case the attractiveness of the intermodal option is not really affected by the length of the trailer. If it makes sense today for the trucker to move a 28-foot pup via intermodal, it will still make sense tomorrow to move a 33-foot trailer on the rail.

The most efficient means of moving 28-foot trailers via intermodal currently is the 57-foot three-unit spine car, with each platform capable of carrying two 28-foot pups (six in all per car). These obviously pose a problem with regard to 33-foot trailers as the change would cut their trailer capacity in half. However, the potential exists to stretch these cars by adding 10 feet in the middle. Clearances should not be an issue, given that the truck centers would be very similar to the classic 89-foot intermodal flatcar and weight capacity similarly should be adequate. It would require some investment but the dollars are small change in the big picture.

Further, if you watch any high-priority intermodal train go by, it’s clear that a substantial percentage of 28-foot trailers today are riding on 53-foot spine cars, one per platform. In such instance, costs are not affected one iota by the move to 33s, and profitability of the traffic might actually improve if the rails can capture a bit more revenue per unit.

Until recently, the Association of American Railroads had taken a neutral position on Twin 33s, but it has recently come out against the proposal. Reportedly the change was due more to concerns from the short line world than the Class I’s, who might have felt reluctant to come out swinging against a change that would mean big benefits for large intermodal customers (UPS, FedEx, Amazon, and the LTLs), with little downside to the railroads. Perhaps the rail opposition to Twin 33s is based more on the slippery slope theory than the economics of this particular proposed change. Once one change is allowed to truck size and weight, can other changes be far behind? Would legalizing Twin 33s reduce the resistance to changes in the weight regulations and enhance the chances of heavier trucks, such as those weighing 90,000 pounds or 97,000 pounds?

In reality few truckers are pushing for an increase in weight limits. It’s shippers who are providing the political muscle for heavier trucks, with proposals to up the federal weight limit to 90,000 pounds on five axles or 97,000 pounds on six axles.

Why are truckers disinterested in raising the weight limits? It comes down to who benefits. Truckers believe that the benefits of heavier trucks will flow directly to the shippers. With higher weights in hand, beneficial cargo owners will demand that the truckload carriers invest in the required new three-axle trailers, while at the same time seeking to gain the benefit of the lower pricing per hundredweight carried that the heavier-loading trailers will produce.

The railroads are dead-set against heavier trucks and with good reason. The change would bring great pressure to bear against the carload sector, which concentrates on heavy-loading commodities, and it would also toss a major monkey-wrench into the intermodal equation.

The changes of the current Twin-33 effort succeeding are still small. The railroads and the safety advocates are united in opposition, while the trucking industry is split. Congress is already having problems passing an appropriations bill without the addition of controversial provisions like this one might represent. This is hardly a recipe for success. Still, the players pushing for the change are large, well-financed, and politically savvy. The current truck driver shortage lends more credibility to their argument.