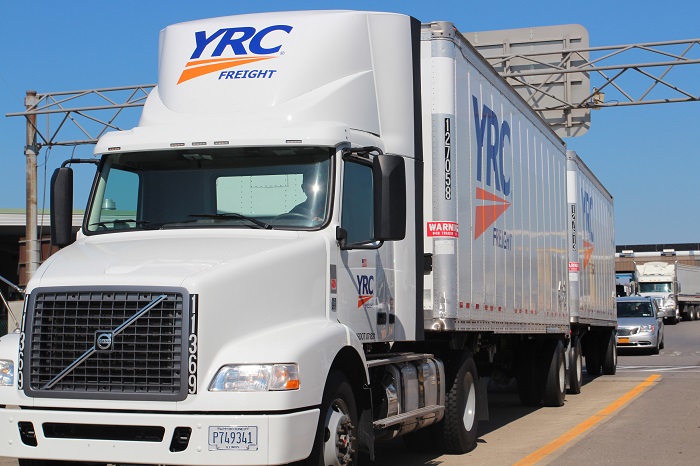 For the first time in a decade, LTL operator YRC Worldwide enters contract talks without an existential threat to its survival looming over the deadline. Photo credit: YRC Worldwide.

The Teamsters union helped save YRC Worldwide from bankruptcy a decade ago by making wage and benefit concessions, but it’s drawing a line in contract talks this year. “We are not interested in concessions in these negotiations,” Teamster National Freight Division director Ernie Soehl said in a statement last month, as its first round of contract talks began.

The union has been working with the company, however, on short-term pilot programs designed to bring work previously outsourced to third parties “in-house.” The first allows truck drivers to work 70 hours in eight days and use the 34-hour restart to begin a new work “week.” The second allows the company to use non-commercial driver's license (CDL) drivers to make local deliveries in box trucks.

Both pilot programs are scheduled to expire this month, but they reveal a need for more resources to meet demand and a desire to reduce purchased transportation and use YRC union labor to handle work that’s been outsourced to third-party cartage companies. More broadly, the programs speak to the impact of higher freight demand and e-commerce in the less-than-truckload (LTL) sector.

The programs, short-lived as they are, indicate YRC Worldwide is looking for ways to overcome constraints placed on its growth by the tightening driver market, a growing problem for LTL carriers, as well as truckload companies. They also point to the type of operational flexibility the company may look for in talks with the Teamsters, if the pilots are deemed successful.

The Teamsters resumed talks with the largest unionized LTL operator this month, as both sides work to reach an agreement before the current five-year contract expires March 31. “The parties are in the very early stages of negotiations. However, we can tell you that the companies are committed to reaching an agreement,” YRC Worldwide said in a statement.

Much has changed since the last YRC Worldwide labor agreement was approved by employees in 2014, keeping a 15 percent wage reduction introduced in 2009 in place through 2019.

In 2014, YRC Worldwide was facing looming debt deadlines, and it again needed Teamster help. YRC Worldwide employees rejected an initial contract proposal but approved a second version that softened concessionary language. Those concessions were a prerequisite for a $1.15 billion refinancing pact between the LTL operator and its lenders, and a $300 million debt-for-equity swap.

That agreement gave YRC Worldwide and its subsidiaries, long-haul LTL carrier YRC Freight and regional carriers Holland, New Penn, and Reddaway, the “runway” former CEO James Welch claimed they need to stabilize their finances and return to profitability after billions of dollars in annual losses running back to 2006. Welch called it a “reset” for the company.

Since then, YRC Worldwide and its subsidiaries have followed a sometimes bumpy path back to profit, but the company has achieved much greater overall stability. The YRC regional carriers rolled back into the black in 2011, followed by YRC Freight in 2014. YRC Worldwide had two consecutive profitable years in 2015 and 2016, its first annual net profits since 2006.

Another major difference from 2014: YRC Worldwide’s debt, while still substantial, is not the critical issue it was then, when it was struggling to refinance $1.36 billion in debt. The company renegotiated its largest debt instrument in 2017, extending its maturity deadline to July 2022, separating the maturity of the loan from the expiration of its Teamsters contract.

“I am proud of the year-over-year operational improvement in our fourth quarter,” Darren Hawkins, CEO of YRC Worldwide, said Friday. “At the beginning of the year [2018], we laid out our strategy to improve our yield metrics by effectively pricing freight and balancing our network capacity, as well as to continue reinvestment in our tractor and trailer fleet,” he said.

“I believe we have a solid foundation to continue improving our operating results. Going into 2019, our liquidity position is strong. We will continue our focus on yield discipline, realizing returns on our investments in revenue equipment, and increasing the coverage of our customers’ supply chain needs with HNRY Logistics,” Hawkins said.

YRC Worldwide estimates its liquidity at the end of 2018 totalled $200 million in cash and cash equivalents, compared with $118.3 million in 2017 and $181.1 million in 2016. HNRY Logistics, launched in December, combines the YRC Worldwide’s asset-based LTL networks with a freight brokerage and a transportation management system (TMS) for shipper customers.

Neither side has indicated what they want

Neither side has said what they want from the new contract, but the Teamsters were clear that they want a contract, not a memorandum of understanding (MOU) extending or amending a 10-year-old agreement. “We want to get these companies back to a normal NMFA [national master freight agreement]-style contract,” the Teamsters’ Soehl said.

This is the third major trucking contract the Teamsters have tackled in the past year. Last July, Teamster employees at ABF Freight System, the seventh-largest US LTL company and a subsidiary of Arcbest, ratified a new contract and its supplements. That contract won back some concessions the union had made in 2013 and included annual wage increases.

Last autumn, the union and UPS Freight, the fifth-largest LTL carrier, went head to head after Teamsters at the UPS subsidiary rejected an initial contract proposal. The company suspended freight operations, effectively closing its terminal network before a second vote in November, in which the contract was ratified. That averted a potential strike at the LTL operator.

The Teamsters for a Democratic Union, a dissident group, is calling for restoration of wages cut through concessions over the past 10 years, and raises “along the lines” of those won in the ABF contract. Economic issues hadn’t come up for discussion in the first round of talks, in which the company and the Teamsters exchanged information and worked on “language items.”

“These negotiations will certainly be difficult and require a lot of work,” Soehl said in the Teamsters statement. There’s no doubt about that, but one thing that’s also not in doubt is YRC Worldwide’s viability. There’s “room for improvement” in its profit and operating margins, as its former CEO often said, but YRC Worldwide face no existential crisis or threat in 2019.

Its biggest concerns are continuing to improve profitability by focusing on “price over buy,” as Hawkins has said, and replenishing its aging fleet, which is a drag on profitability. The company added more than 1,000 Class 8 tractors last year, and is deploying new tractors and trailers at its national and regional fleets, cutting into the need for purchased transportation.

The company’s debt — $904 million at the end of the third quarter — was cut by $58 million over the preceding 12 months. And, as mentioned, the deadline on that debt is now 2022, so there’s no threat from that quarter to YRC Worldwide’s liquidity, as was the case in 2014 and in 2009, driving substantial debt-for-equity swaps and Teamster wage and benefit concessions.

New investments in technology will help the carrier operate its terminals and networks more efficiently, and better align those networks, as envisioned by HNRY Logistics. That’s good news for YRC Worldwide, the Teamsters, and shippers that depend on the company’s capacity. This year’s contract talks may be “difficult,” as Soehl said, but in a “normal” way.