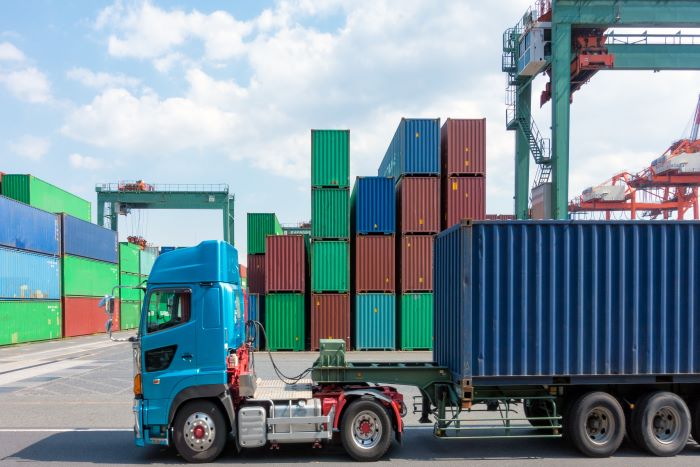 Truckers say it will be business as usual in the ports of Los Angeles and Long Beach even as controversial AB5 legislation takes effect Wednesday. Photo credit: Shutterstock.com.

Editor's Note: US District Court Roger T. Benitez issued a temporary restraining order to AB5 on Dec. 31 that will carve out a temporary exemption for the trucking industry until the courts rule on a lawsuit filed by the California Trucking Association.

Drayage operators in Los Angeles-Long Beach will continue to serve the ports without interruption when California’s controversial legislation known as Assembly Bill 5 takes effect Wednesday. Meanwhile, changes are already taking place behind the scenes that are shifting the relationship between harbor trucking companies and drivers.

When harbor truckers call at the ports in the new year, “it will be business as usual at the gates,” Alex Cherin, a spokesperson for the California Trucking Association (CTA), told JOC.com Monday. He added, though, that “a lot of companies are doing internal checks. They’re self-reflective.”

Trucks won’t be turned away at the gates because ports are not in the business of enforcing trucking legislation, Mario Cordero, executive director of the Port of Long Beach, told the Harbor Transportation Club on Dec. 19. Cordero, who called AB5 enforcement “a state issue,” said he does not anticipate any issues in the harbor while the legality of the law is under consideration by the courts. David Libatique, deputy executive director of stakeholder engagement at the Port of Los Angeles, said truckers will not be denied entry over AB5.

AB5 codifies a 2018 California Supreme Court decision in the case Dynamex Operations West v. Superior Court. The Dynamex standard stated that in order to be classified as an independent contractor, a company must prove the worker is free from the control and direction of the hiring entity, that the work performed is outside the usual course of the company’s business, and the worker is engaged in an independently established trade or occupation.

One of the changes that has been evolving even before California Gov. Gavin Newsom signed AB5 into law Sept. 11 is that some drayage companies are shifting at least a portion of their business to a freight-broker model. At the same time, some owner-operator drivers have secured operating licenses and have set up their own companies. They are hauling cargo for freight brokers in a business-to-business relationship.

A drayage company executive in Southern California who did not want to be identified said owner-operators are telling him the process of applying for a license as an “S” corporation or LLC is relatively seamless.

AB5 is broad-based legislation that affects a number of industries in California, most notably the “gig” operators Uber and Lyft. Uber was joined by other litigants Monday in seeking a preliminary injunction to prevent the bill from taking effect. The litigants charge the legislation violates federal and California law in limiting how ride-sharing and on-demand delivery companies classify workers as employees but does not impose those limits on some other industries.

The law could also dramatically influence the relationship between harbor trucking companies and drivers who own their trucks and contract with drayage companies as independent owner-operators.

The independent-contractor model in trucking has become commonplace since the federal Motor Carrier Act of 1980 deregulated trucking in the US. It has been the dominant model for harbor haulage for years at most container ports.

States such as California and New Jersey, as well as labor unions, have fought the independent-contractor model for the past decade. When companies classify drivers as independent contractors, they avoid paying Social Security and payroll taxes, and they do not have to provide worker benefits such as health care and unemployment compensation.

The Teamsters union, with increasing success, has participated in worker misclassification suits that resulted in the drivers’ receiving back payments. Also, once they are classified as direct employees, the drivers can be organized by the union. By law, unions are not allowed to organize independent contractors.

Trucking companies, lawyers, and private equity firms the past few months predicted that implementation of AB5 on Jan. 1 would result in increased drayage costs, driver shortages, and reduced investments in trucking companies that serve Los Angeles-Long Beach and Oakland.

However, the legal landscape regarding implementation of AB5 is still unresolved. The CTA in November amended its 2018 lawsuit and broadened its scope, challenging the legislation as a violation of federal law that reserves for Congress jurisdiction over interstate commerce. The CTA cited a 2013 US Supreme Court decision affirming federal preemption in a lawsuit involving the original Los Angeles clean-truck plan of 2007.

Drayage companies and owner-operators are not waiting for legal clarification on the status of AB5. Given the ongoing challenges to the independent-contractor model the past two years, some drayage companies in Southern California have already established freight-broker operations and have been dealing on a business-to-business relationship with owner-operators that established their own companies, said Weston LaBar, CEO of the Harbor Trucking Association (HTA).

“Mid-size and larger trucking companies have always had brokerage divisions,” he said. The arrangement enabled the truckers to handle cargo surges, such as during peak season.

More recently, the HTA established its trucker-advantage program that offers owner-operators advice on how to set up a company and secure insurance at a competitive rate. For owner-operator drivers, the process is “inexpensive and seamless,” LaBar said. The trucking executive confirmed to JOC.com that drivers who form their own companies are paying about the same for insurance as he does.

The CTA has put a great deal of effort into its lawsuit challenging AB5, Cherin said. A court decision on the challenge is anticipated in 2020, he said.