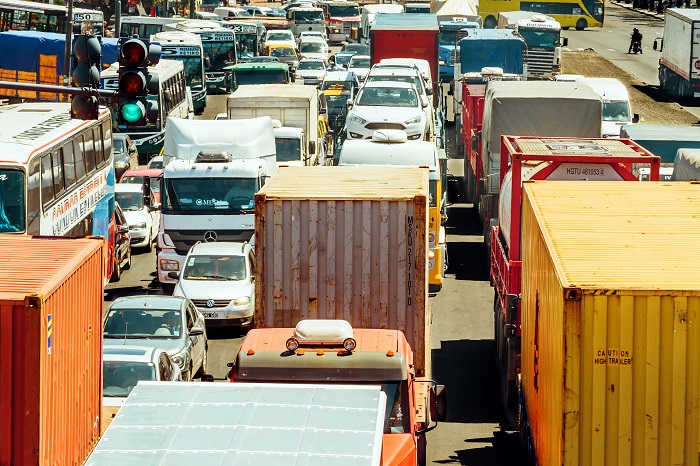 By week’s end, truckers are expected to go on strike and blockade Argentina’s main arteries to secure a 27 percent pay increase, which union leaders claim is necessary to cover the nation's inflation rate. (Above: Trucks traveling on a busy street in Argentina.) Photo credit: Shutterstock.com.

Having witnessed the successful Brazilian truck drivers’ strike that led to higher freight rates and lower diesel costs, Argentina’s truckers are now threatening to do the same, but with slightly different goals.

By week’s end, truckers are expected to go on strike and blockade Argentina’s main arteries to secure a 27 percent pay increase, which union leaders claim is necessary to cover the South American country’s high annual inflation rate, currently about 20 percent and rising.

Further, with about 90 percent of Argentina’s container cargo moving through Buenos Aires (including Exolgan at Dock Sul as well as Puerto Nuevo), a long strike and blockade will substantially harm the national economy, which is recovering — a rebound aided by the open trade policies of President Mauricio Macri during the past two years.

The warning shot across the bow of the Macri administration was a 24-hour strike by truckers in February. Another occurred last week when various trade unions marched through the Argentine capital to protest the Macri administration’s $50 billion bailout/assistance package from the International Monetary Fund (IMF), which almost immediately caused interest rates to surge to 40 percent — the highest among free-market economies — and also stoked inflation.

That prompted Pablo Moyano, the leader of the Argentine Truck Drivers Association, to state the union’s demands.

“If the companies fail to accept this salary increase we would probably have to imitate what lorry drivers did in Brazil recently,” Moyano said. “Our union will stand firm on this intended figure [of 27 percent]. This percentage represents the expected inflation rate for this year. If the government does not accept this request, or if we cannot reach an agreement, the federation will greenlight the entity’s board of directors to take the necessary measures,” a union statement read.

Moyano, regarded as the most powerful trade union leader in a country renowned for strong trade unions, underscored that 27 percent was the minimum his members could accept, as that is the average forecast annual inflation rate, he claims, among experts’ forecasts.

Another similarity with Brazil is Argentina’s currency decline versus the US dollar. After the IMF intervention, the peso weakened to 25.5 to the dollar, its lowest level ever versus the greenback, which increased inflation. In 2015, it took only 10 pesos to purchase $1.

The causes of inflation

Still, at least one economist concluded that union requests for a large pay increase may not help contain inflation.

“The rate of inflation today is determined by the unions, not the [Argentina] central bank,” Economist Nicolás Catena told FT.com. Catena and others argue that until unions — which were given much leeway under the government of Cristina Kirchner (replaced by Macri in 2015) — accept lower wage increases, it will be almost impossible to curb inflation.

The Argentinian sectors likely to be affected by a truckers strike are wine, beef, chicken, and pork exports. Soybean exports, one of Argentina’s major export revenue generators, also will be affected at the ports of Rosario and Paraguay.

Patricio Campbell, president of ONE Argentina, said that a strike by truckers seems increasingly likely.

“We are awaiting news but we expect a strike by the end of this week,” Campbell said. “The great problem here in Argentina is inflation and although the government is trying to control it, it has been rising. The government is hoping to keep it to 17 percent but, in all probability, it will go over 20 percent. If salaries keep going up it is difficult to control inflation.”

“At the moment we don’t foresee a long blockade, like in Brazil, but we see maybe a series of one-day strikes,” he said.