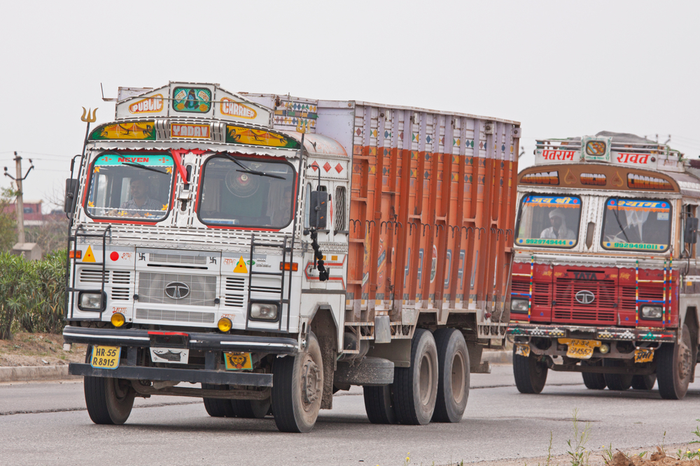 There as many as 40 variants of freight trucks plying India's roads, making the complexity of matching available loads to available capacity that much more complex. Photo credit: Shutterstock.com.

Trucking technology startups are tasked with solving the complex puzzle of matching loads with capacity, and nowhere is that puzzle more complex than India.

A $180 billion industry, of which long-haul trucking accounts for approximately $120 billion, India’s trucking sector is predominantly composed of individual owner-operators or companies with no more than three trucks. There are 40 truck variants, and logistics as a percentage of GDP is pegged at about 15 percent.

“Why is [the cost] so high?” he said in a briefing this week with JOC.com. “In India, trucks are on [the] road for only 13 to 15 days a month. Optimally, they could run 25 to 26 days. So shippers are charged for the space that is unutilized. Our idea was, how do we bring that 13 days to 25 days? Because more utilization equals less cost.”

More than 500 logistics companies and freight brokers comprise the demand side of the marketplace, providing loads from Indian shippers. That includes legacy Indian logistics service providers (LSPs), such as TCI and Gati, and fast-growing digital LSP startups, such as Blackbuck and Rivigo.

On the supply side, Lobb works with 2,000 fleets, accounting for more than 15,000 truckers. Kondur said approximately 1,500 truckers use the company’s platform on a daily basis, and most of them engage three to four times per day. LSPs use it throughout the day to find capacity for their loads, he said.

For the LSPs, Lobb acts as either a portal to find capacity or as a backbone system.

“We sign up the logistics companies by providing [the] platform free of cost,” Kondur said. “They can run day-to-day ops from doing their booking, to lorry hire, to managing financing. From receivables to payments to invoicing. They can run their balance sheet. This gives power to the guys who are small and medium. If you put together all the top 10 [LSPs], they don’t hold more than 4 or 5 percent of market share in India.”

Lobb takes a fee for each transaction booked on the marketplace.

The ability to provide logistics companies with a free operating system emanates from Kondur’s experience in the late 1990s building enterprise resource planning systems for large Indian LSPs. Much of the value from those systems was in the ability to execute payments across cities in an economy that was all cash-driven. Kondur later went into the payments industry.

That background in payments has impacted the value Lobb is trying to provide independent truckers and small fleet owners in India as well.

Perhaps most importantly, from a payment perspective, is that the system allows truckers to get paid more quickly, which allows them to start hauling loads faster.

Eighty percent of the freight costs has to be paid in advance by the broker or shipper, and a trucker won’t leave the loading point until that advance has been paid, Kondur said. Once the load has been delivered, the driver receives the remaining 20 percent.

Using a tool called QuickPay, Lobb said truckers are able to be paid electronically when they accept the load, even if it’s late at night.

“When the vehicle is loaded at 10 p.m. at night, conventionally the broker would pass the money the next day when banks open,” he said. “If a trucker has loaded the truck at 10 p.m. or 2 a.m., in real time the money gets transferred to the trucker through our system. That gives them 300 kilometers of run during the night they wouldn’t have. If they do six to eight trips a month, that’s thousands of extra kilometers they can cover.”

Drivers tend to download the Lobb app, allowing Lobb to use location data to match capacity with available loads. Fleet owners tend to use the desktop portal. For drivers who haven’t downloaded the app, Lobb can also locate them through cell phone triangulation pings.

But the real key, like with freight marketplaces in other regions, is capturing enough data and building the underlying machine learning model to understand what the right load with the right truck is.

“Why is this so complex?” Kondur said. “There are more than 40 variants of trucks in India, more than 12 million trucks plying long haul lanes. Most are owner-operators. Some who have extra money will buy an extra one or two trucks. So the platform has to be precise in terms of understanding the behavior of the driver. Where does he go, is it single driver or double driver, so you understand how far he can go. Does he drive or does he employ someone? We’re enabling truck discovery to happen 90 percent faster — we’re finding trucks in 10 to 15 minutes, versus conventionally it takes two to three hours to find a truck.”

Lobb plans to eventually expand its marketplace to 20 Indian cities and to cover 13 to 15 trucking variants, depending on what its data says are high-density and high-value routes. The company has raised $1 million so far from angel investors and Indian venture capitalists, and it is in the process of raising a Series A round of funding.