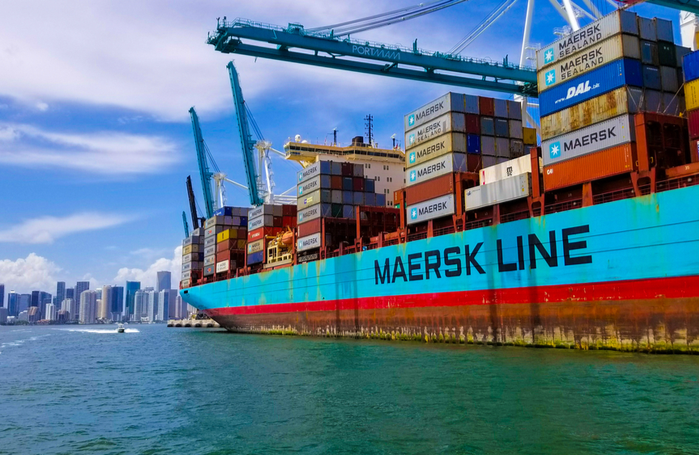 Maersk is making a big bet that development of internal and startup technology will make its transformation into a global logistics integrator a success. Photo credit: Shutterstock.com.

BANGALORE — Given the debate on whether large, established logistics providers can innovate technologically at pace with younger, nimbler challengers, Maersk is trying to have its cake and eat it, too.

In its effort to become a global logistics integrator, the largest global container line is investing in its own capabilities and in startups in multiple regions, including a direct investment in the North American digital freight broker Loadsmart and a service partnership with the Indian digital broker BlackBuck. The company is also fostering startups through its Maersk Growth venture fund, which has thus far backed 13 startups, and an Indian accelerator called OceanPro.

The theory goes that incumbents in any industry are not set up to truly transform themselves in the manner required to hold off those challenges, largely because there is a perceived ceiling for success and because innovation teams in large companies don’t have the requisite fear of failure as their smaller counterparts do.

Maersk is testing this theory up and down their global organization.

The Copenhagen-based company is making a determined — and very public — show of its desire to digitize its operations and product offerings. The most visible example of this its TradeLens platform, a blockchain product it has co-developed with IBM to change the way shippers, freight forwarders, ports, and even fellow container lines share critical logistics and trade documentation.

But less visible is the way Maersk is committing resources to both build its internal capability to innovate, and the extent to which the company is attempting to foster the growth of startups in the logistics and data space.

A perfect example is Maersk’s investments in Bangalore, India, the site of one of the container line’s two technology centers (the other is in the United Kingdom). The Bangalore facility is home to a wide-ranging set of programmers, engineers, and product leaders, and it is also home to Maersk’s technology incubator OceanPro.

Product development teams at the Bangalore technology center include one focusing on the use of the company’s internal data to sharpen the shipper customer service experience, one on decreasing invoicing and payment errors, another on optimizing the carrier’s load planning, another building the company’s data lake (a project called Maestro), and a sort of skunkworks team that tackles out-of-the-box projects.

That last team is developing a beta product that provides a historical heat map of containerized import and export activity to help Maersk and its adjacent service providers determine where assets such as containers and trailers should be deployed. That product was designed with a recent tie-up between Indian digital truck brokerage BlackBuck and Maersk in mind, to assist BlackBuck in building supply density in the areas where Indian importers and exporters need it most. But the product is designed to be usable in other regions.

The product and engineering teams, although based in India, work on global problems, issues that Maersk faces across its customer base and trade lanes, and to which scalable software solutions can be developed.

Co-locating the internal innovation teams with Maersk’s OceanPro accelerator was also a conscious decision. The leadership of OceanPro spends time both choosing participants for its program and then helping to figure out where its products might be able to assist Maersk’s global operations.

The program participants have largely been based in India thus far (OceanPro is on its second iteration), but it plans to include global startups because the program doesn’t require startups to be onsite in Bangalore. For instance, the Swiss-based visibility technology provider Arviem is participating in the second program. OceanPro officials told JOC.com the Indian program will likely be used as a template for accelerators in other regions.

The second OceanPro cohort is focused around data science, said Sriram Narayanasami, Maersk’s Chennai-based vice president and head of global commercial process. Some are based around visibility, and some around predictability of cargo into warehouses.

Having the OceanPro leadership in the same location as the development teams in Bangalore enables Maersk to make decisions about whether something ought to be built in-house or whether the accelerator should be looking for startups that tackle a specific inefficiency.

“Our ambition is to be the integrator of global logistics,” Narayanasami said. “It’s clear we can’t own it all. We have to build a number of these building blocks to be this integrator. We have aspirations around cold chain, customs brokerage, trade finance, cargo insurance. Venture capital is enabling low-cost innovation for enterprises. And whatever Maersk does, our competitors do soon after. Shipping lines and forwarders, they’re all up for change.”