The market is dominated by imports by large retailers such as Wal-Mart, Target, Best Buy, Home Depot and Lowe’s, which, unlike in other markets, tend to contract directly with ocean carriers rather than through forwarders, as is typically the case in the Asia-Europe market. As a result of the one-year contracts that retailers and other large shippers typically sign as of May 1 each year, freight rates in the trans-Pacific eastbound trade tend to be less volatile than in Asia-Europe.

Key developments in the trans-Pacific include the approaching 2015 expansion of the Panama Canal and its potentially huge impact on routing of Asia goods into North America, Canadian West Coast ports’ growing success in attracting U.S.-bound cargo, and West Coast ports’ expected response to these competitive challenges.

Exports moving to those markets typically are lower-value commodities such as wastepaper and scrap that keep China’s manufacturing and packaging industries humming.

SCFI: No gains for carriers as spot rates remain volatile 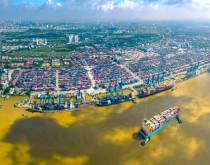 22 Nov 2022
The highs for the container shipping industry, as measured by profits and pricing power, hit atmospheric levels, raising questions of just how steep a fall is in store.
MORE »

Sourcing diversification limited by lack of options outside China
19 May 2022
China continues to hold the largest share of US imports despite years of retaliatory tariffs and the ongoing efforts of US importers to diversify their sourcing to countries such as Vietnam, India, and Brazil.

Asia-US container trade easing slightly before next surge
04 May 2022
Chinese exporters could produce another trans-Pacific bullwhip when stalled shipments start moving again, with major stakeholders warning of a surge of delayed shipments.

Chinese lockdowns risk factory-driven ‘bullwhip’
27 Apr 2022
The longer the Chinese lockdowns last the more intense the scramble by US importers to secure factory production and transport capacity, potentially mirroring the whiplash of order cancellations in early 2020 that were followed by unprecedented demand.

Small US importers struggling as major players find inventory footing
13 Apr 2022
Major retailers and multinationals may have gained greater control of their container shipping supply chains, but smaller US importers lack the scale and are still scrambling for transport capacity.

US importers negotiate trans-Pacific service contracts with far less leverage
16 Feb 2022
Two years after the pandemic reached US shores, logistics managers at US companies that import from Asia are in the toughest service contract negotiations of their careers, according to conversations with more than a dozen importers.

LA-LB port fees starting to chip away at gridlock
18 Nov 2021
The looming storage tariffs in Los Angeles and Long Beach are starting to force carriers, marine terminals, and shippers to break through the gridlock of competing interests.

Shippers ask FMC whether demurrage rule applies to LA-LB port fees
03 Nov 2021
The National Industrial Transportation League wants maritime regulators to clarify whether the new Southern California port fees would fall under rules on demurrage if container lines pass them on to shippers and consignees.

Easing trans-Pacific trade, spot rates temporary and fragile
07 Oct 2021
A dramatic decline in eastbound trans-Pacific spot rates this week is seen as a temporary reprieve for US importers that was caused by production cutbacks in China and a continuous influx of new capacity of chartered ships.

Settling container service-contract breaches legally fraught with pitfalls
20 Aug 2021
The seeking of legal resolutions to conflicts between shippers and container line shippers and carriers over service contracts brings a new set of challenges to both sides, writes analyst Lars Jensen.

Carriers doing best they can with overtaxed US landside: DB Schenker’s Meincke
18 Aug 2021
DB Schenker’s Thorsten Meincke says container lines are doing their “best possible to get the supply chain running,” although he warns US landside challenges will continue to challenge efforts.

Container lines diverting ships from closed Ningbo terminal
12 Aug 2021
CMA CGM and Cosco Shipping have begun diverting ships away from a Ningbo marine terminal closed due to a COVID infected worker, raising the specter that congestion will build at other port terminals.

LA-LB terminals sound congestion alarm well ahead of peak season
29 Jul 2021
The backlog of vessels outside the ports of Los Angeles and Long Beach is rapidly approaching levels seen during last year’s peak season due to continued explosive imports and inland rail bottlenecks.

Asia-West Coast container rates hit new high ahead of surcharges
29 Jul 2021
The average price to ship an FEU from Shanghai to Los Angeles hit an all-time record, according to the Drewry World Container Index, and container lines will begin levying another round of surcharges starting as early as Aug. 1.

Backsliding ocean reliability portends peak season pain
27 Jul 2021
Expectations are that reliability is likely to fall further in the coming months as carriers add new services and deploy extra-loader vessels to meet peak season demand that arrives amid the never-ending onslaught of imports from Asia.

Forwarders warn of growing trans-Pac pricing chaos
21 Jul 2021
Forwarders say US importers of lower-value cargo from Asia and those with low margins are increasingly priced out of the trans-Pacific market as peak season volumes further tax the shipping system.

Carriers struggle to improve service levels while profits soar
15 Jun 2021
Carriers posted an unprecedented level of profitability in the first quarter, as container shipping companies capitalized on a market in which the supply-demand balance is firmly in their favor.

Asia-US shipping chaos has window to ease in second half
14 Jun 2021
Current conditions in the trans-Pacific trade, with strong demand and severe capacity shortages leading to hyper-charged freight rates, are temporary, but the question is: how temporary?

What do agriculture exporters need from Congress?
13 Jun 2021
Peter Friedmann, executive director of the Agriculture Transportation Coalition, outlines proposals to Congress to address what his members’ consider unfair detention and demurrage, and how to ensure container lines honor their common carriage responsibilities.

Will the US-China tariff tit-for-tat ever end?

Cargo is moving? Not so fast.

History in the Making

TPM in a Changing World