Once the United States' dominant international corridor, the centuries-old trade between Europe and North America has stagnated in recent years as recessions struck both continents and as Asia increased its manufacturing prowess. But while analysts would classify the trade as "mature," with little upside or downside, it's also stable, meaning carriers and shippers can plan their strategies without fear of the severe volatility seen in other east-west trades such as the trans-Pacific and Asia-Europe. For many in the trade, anticipation in recent years has centered around preparations for the onslaught of large mega-ships that will begin to pour through the Panama Canal when its decade-long expansion project is complete in 2015. Suddenly, those big ships are arriving early — but from an entirely different direction: through the Suez Canal from Asia. Driving the trend is the introduction of new 10,000-plus-TEU vessels on the Asia-Europe trade, cascading the 8,000-TEU ships that previously plied that trade to the trans-Pacific and, now, through the Suez Canal as carriers seek the economies of scale that they can’t find on the 5,000-TEU ships that are the largest that can transit the Panama Canal.

US Trans-Atlantic Imports Down Despite Mediterranean Growth 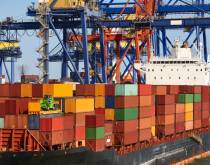 13 Apr 2022
Major retailers and multinationals may have gained greater control of their container shipping supply chains, but smaller US importers lack the scale and are still scrambling for transport capacity.
MORE »

Outlook 2021: Steady trans-Atlantic trade sees demand rebound
24 Dec 2020
A surprisingly strong rebound in the US economy through November bodes well for the headhaul trade between Europe and North America in 2021.

JOC Rankings: Trans-Atlantic container growth continues despite US-EU trade spat
23 Mar 2020
Growth in trade between the United States and Europe decelerated only slightly in 2019, even as antagonism over tariffs, taxes, and subsidies on both sides of the Atlantic deepened.

Autos still under the tariff gun
21 May 2019
The automotive trade is waiting with bated breath for any tariffs coming out of the US Commerce Department’s investigation into the potential national security implications of imports of vehicles and parts.

Container Line Rankings: Top carriers hold US trade share
01 May 2019
Post-consolidation, US container trade has been dominated by the largest ocean carriers and alliances, but smaller, independent lines continue to find a market in the trans-Pacific.

Tariff talks spark trans-Atlantic trade uncertainty
07 Jan 2019
Increasing use of the available capacity in both directions and the impact of service shifts in 2018 could mean shippers find it more difficult to find carrier space for containers this year.

Trans-Atlantic ocean trade faces political and economic uncertainty
06 Aug 2016
Concern over the fate of negotiations toward the Transatlantic Trade and Investment Partnership, the snail’s pace of eurozone economic growth, growing fears of an imminent Italian banking crisis and the U.K.’s unexpected vote to quit the European Union is undermining the calm of the trans-Atlantic container trade.

Trade imbalance, strong dollar dim luster in trans-Atlantic trade
13 Mar 2016
The trans-Atlantic built on its reputation as one of the few reliable trades in a troubled container shipping market in 2015, but it faces tough challenges this year that might tarnish its image.

Global logistics M&A spend skyrockets as cross-border deals heat up
04 Aug 2015
The value of major global transportation acquisitions jumped 50 percent in the second quarter and rose 16 percent from the first quarter, as trucking and logistics firms reached across borders to buy their way into new markets and expand services.

Westbound trans-Atlantic trade transformed from sleepy to dynamic
04 Aug 2015
At a time when east-west container shipping trades are being pummeled by what Drewry Maritime Research calls a toxic mix of overcapacity, weak demand and aggressive pricing, the trans-Atlantic is standing out as a lone, and surprising, stalwart.

Tight trans-Atlantic supply drives container charter market
13 Jun 2015
The worldwide rally in containership charter rates may have lost most of its steam, but not for those with the right ships in the right regions, which right now would be the Atlantic.

Cargo theft spikes in UK, Netherlands in first quarter
10 Jun 2015
Cargo theft more than doubled in the United Kingdom in the first quarter and rose 17 percent in the Netherlands, Europe's biggest container hub, according to data released by the Transported Asset Protection Association. The problem, however, is global.
US imports drive trans-Atlantic growth
05 Feb 2015
U.S. trade moving on container ships directly via European ports, including transshipments, increased 2.1 percent year-over-year to 4.6 million 20-foot-equivalent units in the 12 months ending September 2014, according to PIERS, the data division of JOC Group.

New alliances bring uncertainty to a mature trans-Atlantic market
02 Feb 2015
When the Maersk Kotka called at Charleston and Savannah on Jan. 30 and 31 on a Europe-U.S. Gulf-Mexico-U.S. South Atlantic rotation, there was nothing unusual about the service, but for one big thing: It marked the first call at those ports by a ship on the revamped trans-Atlantic TA3 service jointly operated by Maersk Line and Mediterranean Shipping Co. in the new 2M Alliance.

Ireland gets stake in booming US beef market, lifting EU hopes
06 Jan 2015
Irish steak is back on the U.S. menu as the U.S. begins to lift a 15-year ban on beef imports from the European Union. U.S. containerized beef imports are rising quickly, surpassing 40 percent in most of 2014.

Trans-Atlantic ocean trade growth on an even keel
06 Aug 2014
The U.S. ocean container trade via European ports, including transshipments, increased 3.8 percent year-over-year to 4.6 million laden 20-foot-equivalent units in the 12 months ending March 2014, according to PIERS, the data division of JOC Group.

Steady trans-Atlantic ocean trade offers respite for carriers
04 Aug 2014
Consider the trans-Atlantic market an oasis of calm. For a container shipping industry focusing on the opportunities and pitfalls in the much larger Asia-Europe and trans-Pacific trades, or the rapidly growing north-south trade linking Asia to Africa and Latin America, that’s not necessarily a bad thing.

Ocean carrier rate revision roundup for July 4
04 Jul 2014
Several container lines have planned general rate increases in multiple trade routes to take effect Aug. 1...
P3 rejection sends European carriers, ports scrambling
17 Jun 2014
LONDON — Europe’s major ocean carriers, ports and shippers are urgently rethinking their business strategies following th
Maersk to hike Mediterranean-North America rates
04 Jun 2014
Maersk Line said it intends to raise rates on shipments between the Mediterranean and North America, beginning July 1.
Zim Teams With Hapag-Lloyd to Upgrade US-Med Services
15 May 2014
Zim is teaming up with Hapag-Lloyd on the U.S.-Mediterranean route to increase port coverage and reduce transit times, in the Israeli ocean carrier’s second agreement with a member of the G6 Alliance in the past week.
‘Severe’ Trans-Atlantic Space Shortage Due to G6 Rollout
01 May 2014
A temporary space shortage on the trans-Atlantic is looming thanks to implementation of the G6 Alliance in that trade lane.

P3 Carriers Extend Trans-Atlantic Rates at 2013 Contract Levels, For Now
21 Apr 2014
Container ships are running full on the westbound trans-Atlantic as shippers scramble to complete their annual contract negotiations with carriers at a time when the new P3 Network and other expanding alliances have not yet finalized their new service schedules.

East Coast Problems Drive Interest in Great Lakes Container Service
17 Apr 2014
Interest in a container and breakbulk service between Cleveland and North Europe launching this month has been fueled by erratic service at U.S. East Coast ports and unreliable service via surface transportation, according to users of the service.

Joseph Bonney
As cargo delays at the Port of New York and New Jersey enter their third month, customers are wondering: When will this end? Terminal operators say they expect things to settle down soon after Labor Day. That’s small comfort to port users dreading another month of expensive delays.
MORE »

Consolidation in a New Era