The $5.25 billion expansion of the Panama Canal will either dramatically boost East and Gulf Coast container trade or disappoint their expectations of gaining more cargo. But the opening of much larger locks in early 2016 is already boosting prospects for more exports to Asia from U.S. Gulf ports of LNG, coal and grain cargos.

What is certain is that the doubling of capacity on the connector of the Atlantic and Pacific oceans will change the way the world¹s shipping lines ply their global routes when the project is completed. The doubling of the canal’s capacity will allow shippers to bring their Asian goods to the Eastern and Gulf coasts for less money. That’s largely because the new locks will be able to handle larger vessels that can carry nearly three times as many containers. The project is also expected to bolster Panama’s strategic positions as a transshipment hub and business center for much of Central and South America.

Panama Canal Container Ship Transits Down in May 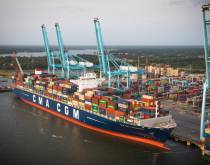 15 Oct 2019
The first step in dredging the harbor in Norfolk will begin in January 2020, kickstarting a project that will make the Port of Virginia the deepest harbor on the East Coast.
MORE »

Canal competition for US East Coast cargo heats up
20 Jun 2019
Asian manufacturing shifts and the rising cost of fuel are influencing all-water US East Coast services.

Panama Canal draft limits lift trans-Pacific spot rates
10 May 2019
Draft restrictions resulting from low water levels in the Panama Canal are driving up spot ocean freight rates between Asia and the US East Coast in the short term, but the long-term outlook is unclear due to further threatened tariffs on US imports from China.

Panama Canal warns of sharper El Niño draft limits
12 Apr 2019
With draft restrictions already imposed in the waterway’s larger locks due to lack of rain, the Panama Canal Authority is working on plans for a third water reservoir that would help replenish the locks system during dry weather.

Panama Canal overtakes Suez on Asia-US East Coast route
22 Nov 2016
The Panama Canal has overtaken the Suez Canal as the favored transit route for carriers operating services between Asia and the US East Coast following the widening of the Central American waterway.

No escape for Panamax owners as ship redundancies mount
16 Nov 2016
Scrap another 100 Panamax ships in the next couple of months if there is to be any rebalancing of supply and demand, Alphaliner warns.

Panama moves forward with Corozal port project
11 Oct 2016
Four port operators have until Feb. 3, 2017, to submit economic proposals to design, build, and operate a container transshipment terminals near Corozal, at the Pacific entrance to the Panama Canal.

Rosy East Coast port forecasts hinge on more than Panama Canal
19 Sep 2016
Irrational exuberance could result in inflated expectations and overbuilding of transportation infrastructure to the US interior if the cargo volumes don’t materialize.

Larger Panama Canal no guarantee of more Asian cargo for eastern US ports
16 Sep 2016
“Cost, consistency and capacity will determine the gateways through which Asian imports enter the US."

2M service reroute from Suez to Panama to speed US import transits
21 Jul 2016
Maersk Line said it would reroute one of its Suez Canal strings just days before the Panama Canal opened June 26.

Massive TEU scrapping just a dent in surplus capacity, Drewry says
18 Jul 2016
Container lines won't be able to scrap themselves out of their excess capacity situation.

Panama Canal ousts Suez as top Asia-US East Coast route
13 Jul 2016
The Panama Canal has ousted the Suez Canal as the leading route for all-water container services between the Far East and the U.S. East Coast.

Panama Canal expansion spells trouble for Panamax ships
12 Jul 2016
The recent opening of the expanded Panama Canal is shaking up the deployment pattern of container ships.

Panama Canal expansion will affect shipping — but how?
25 Jun 2016
The larger locks of the Panama Canal open on Sunday, but what impact will they have on global trade and container shipping?

2M to shift USEC all-water service from Suez to Panama
24 Jun 2016
The 2M Alliance plans to shift one of their Asia-to-U.S. East Coast services to the newly expanded Panama Canal.

All-water service replaces Mexican intermodal route to Houston
14 Jun 2016
A new Panama Canal container route to the U.S. Gulf from Asia will replace and build on an intermodal rail service that Maersk Line launched via Mexico.

Asaf Ashar, professor research, emeritus, National Ports & Waterways Initiative, University of New Orleans
The U.S. Army Corps of Engineers' channel assessment methodology based on national benefit/cost ratio is speculative and, in some areas, flawed, especially on the benefit side.
MORE »