When the U.S., Canada and Mexico implemented the North American Free Trade Agreement in 1994, it opened the door for open trade by ending tariffs on various goods and services and creating an even playing field for the three markets. Today, agricultural goods such as eggs, corn and meats; manufactured products such as auto parts; and raw materials such as steel and lumber flow freely across the borders, primarily by truck and rail.

The U.S. exported more than $280 billion in goods to Canada in 2011, making its northern neighbor the largest source for outgoing products.  U.S. imports, at more than $315 billion, make Canada the second-largest source of inbound goods after China.

Exports to and imports from Mexico set record highs in 2011, with exports reaching $198.4 billion and imports hitting $262.9 billion.

The combined $1.1 trillion in combined trade among the three partners make NAFTA the second-largest trade bloc in the world, second only to the 27-member European Union.

US Truck, Rail Trade With Mexico Jumped in July

US Cross-Border Truck, Rail Traffic Up in April 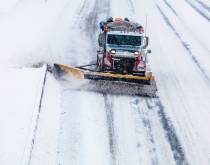 Winter storms deal another blow to US supply chains

17 Feb 2021
Texas is the epicenter of supply-chain damage caused by Winter Storm Uri, but the disruption is being felt nationwide. Mexican imports by truck may be delayed for days.
MORE »

Canada’s TFI to acquire US 3PL DLS for $225 million
15 Sep 2020
By acquiring a Chicago-based logistics provider and freight broker from R.R. Donnelley, Canada’s TFI plans to better integrate and scale US operations in freight and e-commerce.

Detroit’s ‘Matty’ Moroun bridged trucking eras
15 Jul 2020
Moroun made the trucking real estate deal of the century when he acquired the Ambassador Bridge in 1979 and shaped the flow of goods between the US and Canada for decades.

TFI acquisition taps cross-border drayage capacity
12 Jun 2020
The addition of Gusgo Transport to its operating subsidiaries gives TFI deeper access to international containerized freight moving between the US and Canada.

Produce lifts refrigerated trucking demand, rates
26 May 2020
Produce shipments from western and southern US states provoked a refrigerated spot rate spike in May, and some truck shortages in California.

USMCA will speed Customs, but freight likely to lag
07 Jan 2020
The US-Mexico-Canada Agreement may speed the processing of goods at US borders, but won’t necessarily speed transportation at the congested Mexican border, experts warn. That will require further investment in infrastructure and technology.

DHL looks to capitalize on growing El Paso market
10 Oct 2019
A bigger footprint in El Paso, Texas, will help the freight forwarding arm of Deutsche Post DHL reach more shippers in the US and Mexico.

Mexico trucking benchmarks to launch in August
19 Jul 2019
A new truck rate benchmarking program designed to give Mexican shippers their first scientifically-created rate comparisons will be available next month, compiled by Chainalytics and a Mexican partner.

ELD mandate a ‘game changer’ for Canadian shippers
12 Jun 2019
Canadian shippers preparing for the upcoming electronic logging device mandate have a good model in the US experience.

Canada’s Mulroney: North American free trade ‘will prevail’
04 Jun 2019
Former Canadian Prime Minister Brian Mulroney is calling for the expansion of the NAFTA free-trade zone throughout the Americas, as well as improvements in labor productivity at home.

US tariffs threaten fresh congestion at Mexico border
04 Jun 2019
US shippers facing a new 5 percent tariff on Mexican goods are expected to rush goods north before a June 10 deadline. That could create more costly congestion.

Shippers eye ocean transport as US-Mexico tensions rise
03 Jun 2019
With uncertainty surrounding US-Mexico relations, including threats of border shutdowns, tariffs and a Congressional showdown the US-Mexico-Canada agreement (USMCA-NAFTA 2), shippers are expressing more interest in all-water options to bypass any congestion on the border.

Shippers warned to plan for more US-Mexico border congestion
16 May 2019
Shippers need contingency plans, and action, to deal with the threat of more truck congestion and freight delays at the US-Mexico border, logistics executives tell JOC.com.

US-Mexico truck delays forecast to last weeks
16 Apr 2019
Ryder urges shippers to apply for expedited clearance to mitigate disruption from US-Mexico cross-border congestion as it adds equipment and builds out its truck yards and warehousing space near the border.

Daseke cool on M&A, hot on logistics
19 Feb 2019
After doubling revenue through mergers in two years, specialized flatbed operator will double down on services, building back-office links among subsidiaries.

Mexico preps for strong 2019 container growth
02 Jan 2019
Mexico faces a wealth of uncertainty as it enters 2019, but it is unlikely to unravel the trade sector’s strength.

Manitoulin acquisition adds Yukon to truck network
17 Dec 2018
The Manitoulin Group of Companies acquired the book of business of one company and partnered with its parent company to broaden its coverage in northwest Canada.

New US grants prop up port, highway, rail projects
11 Dec 2018
Port, rail, and highway projects are among 91 grants distributed by the US Department of Transportation, including for the extension of port berths and terminals and inland port rail access.

Candace Sider, vice president, regulatory affairs, North America, Livingston International
Opening up the possibility of a break in free trade among the United States, Mexico, and Canada would be costly on many levels.
MORE »

US tariffs – the long-term impact on trans-Pac imports

New NAFTA rules — a boon to US auto employment?

Why a US auto import tariff should concern automakers, workers