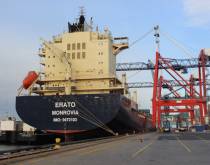 09 May 2019
The Port of New York and New Jersey and other ports along the Gulf and East coasts are looking at how to reduce the cost and productivity loss that occurs when longshoremen hired for the weekend are unable to work due to vessel delays.
MORE »

Tentative ILA-NYSA Deal ‘Sets the Stage for Changes’
07 Mar 2013
The International Longshoremen’s Association and the New York Shipping Association tentatively agreed on a local contract that, if ratified, likely means East and Gulf Coast ports will avoid a work stoppage this year.

Peter Tirschwell, senior director, content, IHS Maritime & Trade
Typically, once a U.S. longshore negotiation is settled, the affected ports revert to a state of normalcy despite whatever disruption occurred during the talks. U.S. West Coast negotiations over the past 20 years have never been without disruption but were always followed by near-normal operations that lasted in some cases for years. The six years leading up to the June 30, 2014, expiration of the recent agreement between waterfront employers and the International Longshore and Warehouse Union saw only sporadic disruption. But there is a difference between then and now: The current agreement reached on Feb. 20 failed to resolve all issues and one in particular — chassis maintenance — stands out as holding the potential for sparking further disruption and uncertainty for shippers.
MORE »

Meanwhile on the East Coast…

Changing of the Guard