A transformation has taken place at U.S. ports along Gulf of Mexico. Those devastated by Hurricane Katrina in 2005 were forced to rebuild. Gulfport’s work is not yet finished. The Great Recession further impacted the region’s economy. The new bigger locks the Panama Canal offer hope for a resurgence of shipping activity along the U.S. Gulf Coast as ports gear up for new trade from Asia. While some ports are building container volumes in north-south trade and on routes to and from Europe, the Mediterranean, Mideast and Africa, others are targeting growth in breakbulk cargoes, and one port — Corpus Christi — is poised to see explosive growth in energy-based exports. With billions of dollars of agriculture products, pharmaceuticals and manufactured goods crossing the U.S. border with Mexico each year, logistics companies and railroads are looking at ways to ease and expand the flow of trade with the U.S.’s southern neighbor. This page includes information about the ports along the U.S. Gulf Coast, the region’s infrastructure projects, its trade and company supply chains.

US Containerized Imports Edged Up in August 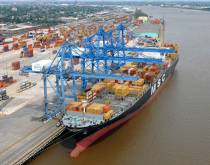 04 Jan 2021
Expecting a return to volume growth, the ports of Houston and New Orleans are dredging and enhancing terminals to allow calls from larger vessels, while Tampa Bay will add capacity through new truck gates and additional gantry cranes, among other projects.
MORE »

Asia–US import wave building on East, West coasts
16 Nov 2020
The intensity of Asia import flow is also shifting on the West Coast as volumes in October rose more sharply through the Northwest Seaport Alliance than though Southern California.

JOC Rankings: Resins buoy US Gulf Coast ports during COVID-19
02 Nov 2020
The busiest US Gulf Coast ports saw only a small decline in throughput during the first seven months of the year despite the effects of the COVID-19 pandemic on consumer demand in the US and abroad.

Inland point intermodal flows shift away from US West Coast
10 Jun 2020
The focus of IPI has been moving away from the US West Coast toward the East Coast and Western Canada. This has big implications for individual railroads, but also broader impacts regarding shorter length of haul and diminishing industry revenue per move.

Houston port channel widening eligible for federal funding
24 Apr 2020
The need to widen the channel gained urgency last year when a group of non-container businesses that rely on the port expressed concerns their cargoes would be squeezed by the increasing size and number of container ships moving through Houston.

US resin export boom fading on COVID-19 pressures
14 Apr 2020
The strong growth in US resin exports of the last two years could falter in 2020 as overseas production gets cheaper due to the fall in oil prices and demand weakens amid the global recessionary pressures from the coronavirus disease 2019 (COVID-19) pandemic.

JOC Rankings: US Gulf ports look to maintain cargo growth despite COVID-19
13 Apr 2020
The ports of Houston, Mobile, and New Orleans will likely find the strong growth they enjoyed in 2019 difficult to replicate this year as US ports confront the impact of coronavirus disease 2019 (COVID-19) on supply chains.

CMA CGM pledges Gulf solutions if Houston ship sizes limited
21 May 2019
The Texas Legislature’s House of Representatives on Friday approved legislation that would prohibit ships of 9,500 TEU or greater from entering the channel without prior approval from the port pilots’ board.

Lawmakers back maximum ship size in Houston channel
20 May 2019
Texas lawmakers have backed legislation that limit vessels in the channel that leads to the Port of Houston to 1,100 feet, unless port pilots say that such a mega-vessel can safely and efficiently move up the channel in two way traffic.

China tariffs take toll on US Gulf exports
29 Mar 2019
As exports from the region waned, expansion of all-water services from Asia and a boom in import distribution facilities contributed to double-digit growth in imports to US Gulf ports last year.

US shipments of wind power equipment soar
30 Jan 2019
Several US ports, many in the Gulf, are expecting a surge in wind cargo during the next 24 months.

More equipment just part of US chassis solution
16 Jan 2019
Chassis are one piece of the puzzle, and all parts must fit together in sync for the supply chain to remain smooth in the future.

ILA, USMX to resume contract talks
09 Mar 2018
Although the International Longshoremen's Association has not had a coastwide strike since 1977, beneficial cargo owners are anxious to have a new agreement in place.

Logistec expands in US Gulf market with acquisition
01 Mar 2018
Logistec’s previous operations were centered in Canada and on the US East Coast.

Brownsville port looks to energy traffic for growth
24 Nov 2017
With land and location, Brownsville is on the verge of attracting multibillion-dollar projects.

Peter Tirschwell
Vessel capacity remains the overriding concern about whether the Port of Houston will be able to handle the wave of plastic resins exports that will add half a million TEU annually to export volumes within a few years.
MORE »

After more than a decade of West Coast disruptions, shippers are wising up

Game on for the ILA