The fallout from last winter’s freeze and chain of storms underscores the systemic problems in North America’s port drayage infrastructure — problems that are still with us in the second half of 2014.

Congestion and delays at some of the largest North American ports — in particular New York-New Jersey  on the East Coast and Los Angeles-Long Beach in the West — were percolating even before frustration among drayage drivers boiled over at Port Metro Vancouver in February and March in the form of a walkout by union and non-union truckers.

“Trucker dissatisfaction with marine terminals is not a local phenomenon," Bruce Wargo, president of PierPass, said at the JOC's TPM Conference in March. "It’s a symptom of the real problem, which is the traditional delivery process most terminals have in place today.”

The drayage business is only complicated by ever-larger ships straining terminals already constricted by the lack of 24/7 operations, a shortage of chassis equipment and truck drivers, and a cost-is-king philosophy among all supply chain interests that equates to no one ponying up the money that could help eliminate the chokepoints.

Some ports are trying to get ahead of the problem, even if they’re already behind. New York-New Jersey and Virginia have formed task forces represented by various supply chain interests aimed at finding ways to improve port performance, including drayage issues.

The question is whether any proposals that emerge will be in time to prevent a complete breakdown — and whether all supply chain partners will work together to implement them. 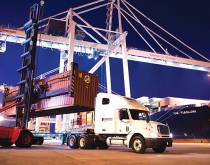 Chicago truck turn times tick up as cargo flows spike
30 Dec 2020
Truckers are taking longer to get through terminals in Chicago because of the surge in cargo and changes in stacking containers with some railroads.

Cargo surge causes up to two-week dray backlog in Miami
23 Dec 2020
Drayage capacity in Miami is tight due to an unusual late-year surge in fruits and vegetables, cigars, and casual wear, causing truckers to be booked up seven to 14 days in advance.

Drayage shortage crimps supply chain amid quick demand recovery
19 Oct 2020
Available drivers have been hard to find with such a sudden and sharp rise in domestic and international container flows, placing a great deal of strain on the fluidity of the supply chain.

DCLI exiting NVO business to deal directly with truckers
06 Oct 2020
DCLI is ending contracts with NVOCCs because it believes truckers are better partners in the merchant haulage business, but other chassis providers will not follow suit and plan to keep conducting business with everyone.

HOS changes to benefit drayage, short-haul truckers
14 May 2020
Regulators are expanding the area covered by the short-haul exemption to trucking hours of service rules, and that brings opportunities to drayage and e-commerce delivery carriers.

US importers urged to ‘proactively’ challenge demurrage charges
03 Apr 2020
BCOs and drayage truckers need to document unreasonable detention and demurrage charges, but also not contribute to the problem, speakers toldl a JOC.com webcast.

Port Tampa Bay looks to capitalize on direct Asia connections in 2020
15 Jan 2020
Port Tampa Bay believes 2020 will be a big year with an expansion of its container terminal, three weekly trans-Pacific vessel calls, and a major push to win cargo owners in the Interstate 4 corridor by selling the value of short hauls to maximize hours of service.

LA judge deals blow to AB5’s validity for truckers
09 Jan 2020
A California judge has sided with Cal Cartage in a lawsuit brought by the State of California, agreeing with a District Court restraining order issued Dec. 31 that AB5 does not apply to trucking because of federal preemption.

Glitch at UP gates delays truckers at Chicago terminal
02 Jan 2020
Union Pacific Railroad has been suffering technical issues with its gates at Chicago’s Global 4 terminal, causing major congestion and delays in cargo deliveries.

Judge issues temporary stay on AB5
31 Dec 2019
The US District Court has issued a last-minute reprieve for the trucking industry looking to block AB5, issuing a temporary restraining order on Dec. 31 to protect the industry until a Jan. 13 hearing.

BNSF’s Chicago intermodal depot regains flow after operational shift
17 Dec 2019
Traffic problems that slowed trucks in BNSF’s Lot 16 outside of Chicago have been resolved through a partnership between the railroad and an Intermodal Cartage-owned yard operator.

California court rules ABC test applies retroactively
09 Oct 2019
A California Court of Appeals has ruled that the “ABC” test can be applied retroactively, a decision that means truck drivers can calculate damages for past misclassification.

California bill set to reshape drayage landscape
05 Sep 2019
The California state legislature is on track to pass a bill, which the governor intends to sign into law, that could fundamentally alter the relationship between shippers, trucking companies, and port truck drivers. It's expected to be signed before an intermodal conference this month in Long Beach.

US drayage rates rise as length of haul shrinks
19 Jul 2019
Although drayage rates are rising annually, digital load-matching platform DrayNow says expenses are dropping due to shorter lengths of haul, a trend true for international containers, too.

BNSF grapples with Elwood lot congestion
10 Jul 2019
Truckers continue to battle turns of more than an hour at times in BNSF’s Lot 16 outside Chicago, where the railroad has instructed all empty containers to be returned. This means drivers complete fewer jobs per day and shippers have to wait longer for service.

BCOs seek short-term chassis relief as overhauls stall
05 Jul 2019
There has been progress in finding a solution to the chassis woes plaguing the containerized shipping industry, but those advancements have been very slow coming. Larger solutions will take years and face many hurdles along the way.

NS, UP interline revamp to require crosstown drays
04 Jun 2019
Union Pacific Railroad and Norfolk Southern Railway announced a series of changes to cross-country service, which will require a crosstown drayage in Chicago for a number of international loads heading to and from ports.

Rail demurrage stings US shippers without weekend warehousing
29 May 2019
Although last week’s Surface Transportation Board hearing didn’t include intermodal, shippers complain about penalties assessed when their cargo arrives on a Friday night and their warehouses are closed until Monday.

Demise of NY-NJ pool shows continuing chassis challenges
09 Oct 2017
In the wake of the collapse of discussions to create a New York-New Jersey chassis pool, there has been a shrugging of shoulders among some in the industry.

NY-NJ joint chassis pool collapses
14 Sep 2017
The Port of New York and New Jersey is searching again for a way to create an interoperable chassis pool after the latest effort collapsed.

Seattle-Tacoma gives more time to extended-gate pilot
10 Nov 2016
Agricultural exporters will have access to extended gate hours in Seattle-Tacoma until Dec. 2 thanks to financial support from the Northwest Seaport Alliance to help fund flex, night and weekend gates.

Drayage driver classification fight reawakens at NY-NJ port
06 Jun 2016
Drayage companies that service the Port of New York and New Jersey are once again squaring off with the Teamsters union.

Lessors hope to get NY-NJ chassis pool ‘back on track’
07 Apr 2016
A proposed universal chassis pool at the Port of New York and New Jersey is dead in the water, but chassis lessors haven’t given up on the idea, an executive at one of the leasing companies told truckers Thursday.

LA-LB terminals that teamed with truckers scored best turn times
16 Feb 2016
Marine terminals in Los Angeles-Long Beach that have collaborated with cargo interests and truckers on creative programs such as dray-offs and free-flow of containers recorded the best gate turn times in January, according to data published by the Harbor Trucking Association. But even those gains weren’t able to speed overall truck turn times much at the top U.S. container port complex.

Oakland seeks 45-minute truck turns
28 Jan 2016
A Port of Oakland efficiency task force pledged this week to work toward consistent truck wait times at container terminals of no more than 45 minutes for a single transaction and 90 minutes for a dual transaction, compared to wait times of two hours or longer that some truckers say they regularly experience.

LA-LB ports revisit short-haul rail to beat congestion
22 Dec 2015
The ports of Los Angeles and Long Beach are taking a fresh look at short haul-rail of containers to an inland cluster of distribution centers as a way to combat systemic congestion at the largest North American container gateway.

Cargomatic says ‘free-flow’ drayage technology ready for release
17 Dec 2015
Cargomatic plans to launch the commercial version of its "free-flow" system for moving containers through congested ports by the end of the year, co-founder and president Brett Parker said.

Scott Weiss
Nightmare scenarios are occurring all day, every day at the two biggest U.S. container ports, and the customers receiving some of the worst service are among the nation's largest shippers.
MORE »

The real cost of carrier cost-cutting

Drayage in the Driver’s Seat

Drayage: Historically, Not an Easy Job