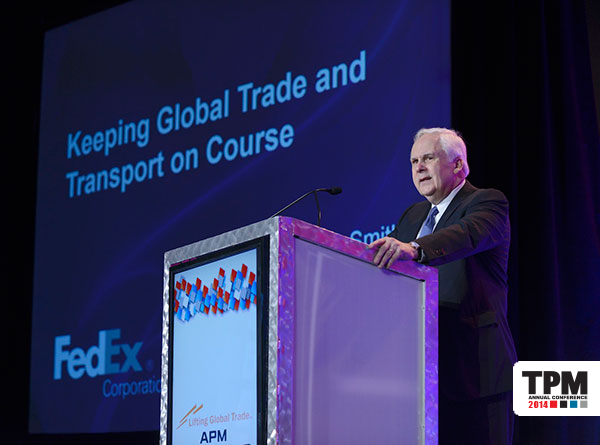 “The problem is not cyclical, it’s systemic, and it’s spreading,” Smith said in a keynote speech. “We need to redouble our efforts to move governments toward trade liberalization,” he said. “Protectionism squelches competition and lowers economic growth.”

According to the Organization for Economic Cooperation and Development, each dollar of increased protection leads to a drop of 66 cents in gross domestic product (GDP), and a dollar increase in tariff revenues can result in a $2.16 drop in world exports and a 73-cent decline in world income.

Any lower economic growth attributable to trade barriers has an immediate impact on $45 billion FedEx and the other freight carriers, logistics operators and shipping companies at the TPM conference. Smith chronicled the expansion of global trade — from the arrival of the U.S. vessel Empress of China in China in 1784 through the post-World War II economic boom — that gave FedEx wings in its early days.

“America’s willingness to opening our markets has been the key to lifting billions of people out of poverty around the world,” Smith said. However, “It’s clear that recently the U.S. has not exerted the leadership that began with Nobel Prize winner and Secretary of State Cordell Hull,” whose post-World War II policies encouraged the rebuilding of Germany and Japan.

“Over the last few years, almost every trading nation has introduced policies that permit greater government intervention in the trade process,” Smith said. “It’s discouraging to watch nations made prosperous by the opening of markets and the growth of global trade attempt to throttle the very forces that created their prosperity.” The World Trade Organization last year decried the growth in protectionism as it cuts its projections regarding global economic growth.

He didn’t hold out much hope for a quick reversal of the anti-trade trend. In recent years,“China’s trade practices have eroded a great deal of support in the United States for trade liberalization, Smith said. He singled out China’s Indigenous Innovation Policy, claiming it is clearly focused on protecting Chinese companies against foreign competition.

In his speech and in remarks to JOC reporters, Smith criticized slow progress in the U.S. on the Trans-Pacific Partnership and the Transatlantic Trade and Investment Partnership and failure by Congress to quickly re-authorize Trade Promotion Authority for President Barack Obama.

“Instead of trying to fast track the European and Pacific free trade pacts, due to domestic politics Democrats and many Republicans are opposed to re-instituting the president’s trade promotion authority or TPA,” Smith said, adding that, in the past, that authority was regularly extended.

The TPP and TTIP could increase world gross domestic product by 5 percent, “just by simplifying trade regulations,” Smith said. “That would create millions of new jobs around the world,” including in the U.S.

However, stronger enforcement of current trade pacts is key to winning approval of new ones. “It’s essential that the U.S. enforce existing trade agreements as grievous violations will continue to further erode congressional support” for new agreements, Smith said.

The trend against freer trade can be traced to two root causes: the increased emphasis on security worldwide following a decade of war and terrorist attacks and the financial crisis of 2008 and global recession, which soured public opinion on trade in many countries, Smith said.

One result is that customs regimes are increasingly bureaucratic and difficult for shippers and transport operators to navigate.

International trade is also being impeded by non-tariff measures often tied to health and safety concerns that actually serve to protect local industries. World Bank research shows such measures on average can increase the price of a product by 8.7 percent, and sometimes much more.

The recent Winter Olympics in Russia provide an example. “FedEx could not ship 3,000 pillows which were in short supply to Olympic athletes in Sochi because Russian customs restrictions would only permit five pillows to be transported with delivery in six weeks,” Smith said.

“The result was a microcosm of the effects of less free trade,” he told 2,000 logistics executives attending TPM. “No one sold the desired pillows, no one transported and cleared the pillows, and I suspect someone’s quality of life probably suffered, through lack of sleep.”

Smith did hail the adoption by the World Trade Organization last December of a multilateral trade facilitation agreement. “While certainly not comprehensive, its goal is to make global trade simpler, more transpoarent and more predictable,” he said. “We’ve got to urge governments everywhere to work aggressively to ensure compliance with the WTO by all participants.”