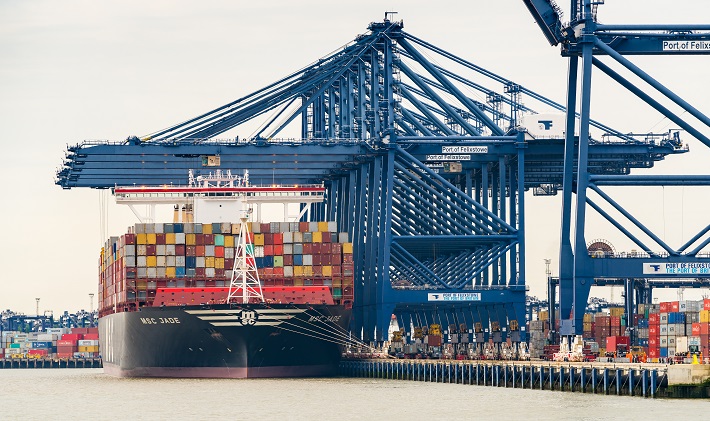 While other EU states are recruiting extra customs officials at their leading ports, including Rotterdam, Antwerp, and Calais, the British government has yet to unveil its spending plans to ease post-Brexit traffic through the country’s key shipping hubs. (Above: The Port of Felixstowe, United Kingdom.) Photo credit: Shutterstock.com.

LONDON – European shippers, freight forwarders, ports, shipping lines, and truckers are increasingly pessimistic about the impact of Brexit — the UK’s exit from the European Union next March — on the logistics sector, ahead of a down-to-the-wire meeting of EU leaders in Brussels later this week.

The industry is facing a summer of uncertainty as the June 28/29 summit is now expected to focus on more pressing issues for the other 27 EU states, particularly the growing migrant crisis, eurozone reform, the accelerating trade conflict with the United States, and the demands of Italy’s new populist government; those issues are likely to push Brexit down the agenda.

The transport sector, potentially the front-line victim of a hard Brexit involving the UK’s exit from the EU’s customs union and single market, is frustrated at the lack of progress in negotiations with Brussels and the government’s scant attention to the nuts and bolts impact on the nation’s supply chain.

“With less than 10 months to go until the country is set to leave the EU, we have nothing agreed and there is every prospect of another flunked summit,” warned James Hookham, deputy chief executive of the Freight Transport Association (FTA), one of the country’s leading logistics organizations. And the UK’s reliance on Brussels “blinking first” is “hanging the logistics industry out to dry,” he added.

With the clock ticking towards the UK’s departure from the European Union after 46 years in the union, the transport sector remains in the dark about the government’s stance. “Simply saying things will be OK is no longer enough,” Leigh Pomlett, the FTA’s president and executive director of CEVA Logistics, told delegates at its Keep Britain Trading conference last week. “The logistics sector will be key to making Brexit work for the UK, but we can no longer work blind and be left to guess what we may have to do, and when by.”

The threat to the transport sector is, however, finally making headlines beyond the industry, with the Sun, the UK’s best-selling newspaper, promoting Felixstowe, the country’s top container port, as the solution to threats of massive truck convoy backups at the Port of Dover, the leading roll-on, roll off (ro-ro) hub, following the country’s exit from the customs union.

Ironically, the article in the pro-Brexit tabloid coincided with vessels, trains, and trucks facing delays and cancelations at Felixstowe due to the teething problems of its new IT system: that forced Maersk Line and Mediterranean Shipping Co. to divert container vessels to London Gateway and Southampton.

While the logistics industry waits for signs of what Brexit will look like, shippers are making contingency plans to protect their trading links and supply chains, with nearly 15 percent of European firms with UK suppliers moving some or all of their business out of Britain, according to the Chartered Institute of Procurement and Supply. US pharmaceutical company Merck & Co is said to be considering a stockpile of up to six months supply of products and revising its trade routes ahead of Brexit.

Transport firms, meanwhile, are fretting they will lose business in key sectors as a result of the UK’s new trading relationship with the European Union. Parts of the car industry risks “extinction” unless the United Kingdom stays in the customs union and there is “zero evidence” that trade deals beyond the European Union will provide any economic benefit, according to Paul Drechsler, president of the Confederation of British Industry.

The logistics sector also risks losing traffic as leading shippers warn of the negative impact of a hard Brexit agreement, or even worse, a no-deal divorce.

Airbus, the giant European aircraft manufacturer, last week threatened to leave the United Kingdom, warning that whatever deal is struck, “Brexit has severe negative consequences for the UK aerospace industry and Airbus in particular.” A major issue for the company, which employs about 15,000 people in the United Kingdom, is the reliance of its complex and extensive just-in-time supply chain on a frictionless trade agreement between London and Brussels.

While large companies such as Airbus and automobile manufacturers, which are foreign owned, attract the government’s attention, transporters feel they are being ignored.

The FTA listed eight demands at the beginning of the year to ensure a free flowing post-Brexit supply chain but “not a single one has been processed,” according to Hookham.

“We keep getting told that all food and agricultural products to the continent and Ireland will be checked at EU ports but there is nowhere to check them and the system to check them does not exist.”

“We still do not know if we will be able to employ the 43,000 truck drivers that are nationals from another [EU] member state — that’s 13 percent of our driver workforce. There is no clarification on whether UK drivers’ qualifications are to be recognized so they could well be barred from driving their own vehicles on the continent.”

The “real show stopper” is that there are only 103 international haulage permits to cover the 300,000 journeys made by UK trucks to Europe each year.

Transporters were encouraged and pleased — at least temporarily — by the agreement between London and Brussels for a 21-month transition period after Brexit that will keep the country in the EU’s single market and its customs union until the end of 2020, giving more time to strike a new trading relationship. But with Brexit negotiations stalling, logistics firms and shippers are calling for an extended transition period.

The logistics sector welcomed the UK government’s proposal for a Customs Backstop that will temporarily keep the country in the EU’s customs union, to ensure an invisible border between Ireland and northern Ireland, until a new trading deal is signed.

“This arrangement will give ports and freight operators a measure of short-term certainty. It is now essential that government makes progress on our long-term customs and other border arrangements,” said Richard Ballantyne, chief executive of the British Ports Association (BPA). “There is still an urgent need for clarity on non-customs checks, which account for three quarters of border stoppages. These have the potential to cause huge disruption.”

Brussels has, however, rejected the UK’s call for a definite cut off date for the backstop.

Shippers of animal and plant products are most exposed to failure by the United Kingdom to align with EU standards after it leaves the bloc’s single market. Under EU rules, plant and animal products could be subject to “hugely disruptive” inspection regime at the border, the BPA warns. “This could be problematic for all types of ports handling such European trade but the most challenging would be in respect of HGVs [heavy goods vehicles] at ports such as Dover, Holyhead, and Portsmouth,” according to Ballantyne.

What’s more, striking a practical customs deal with the European Union does not guarantee a free flow of traffic, particularly trucks, between the United Kingdom and the European Union. Benoit Rochet, deputy chief executive of the Port of Calais, France’s top ro-ro hub across the English Channel from Dover, estimated that about 1 percent of trucks crossing the channel will be stopped for customs checks. But he recently told the UK Parliament’s Treasury Committee that the UK’s departure from the single market will result in more checks on animal and farm products. “If there is no deal between the EU and the UK then there will be very frequent controls of lorries [trucks] of meat and fishes. That could be a problem,” Rochet said.

Ports on both sides of the English Channel and North Sea say they can cope with the new UK-EU trading agreement with the required infrastructure but can’t start work on the projects until they know what’s needed after the United Kingdom leaves the customs union.

The financial impact of quitting the customs union is becoming clearer with the chief executive of the UK’s tax and customs authority, Jon Thomson, estimating the cost of customs declarations and rules-of-origin checks on imports and exports with the European Union at £17 billion ($22.5 billion) and £20 billion.

The UK logistics sector is increasingly frustrated that while other EU member states are recruiting extra customs officials at their leading ports, including Rotterdam, Antwerp, and Calais, the British government has yet to unveil its spending plans to ease post-Brexit traffic through the country’s key shipping hubs.

UK ports are also calling for increased government spending on infrastructure to match the EU’s multibillion-euro Trans European Transport Network projects and other plans such as its Motorways of the Sea program. “The UK Department for Transport recently published the results of its Port Connectivity Study, which highlighted that ports are often not factored into transport and wider government decisions,” said Ballantyne.

“This must be corrected,” he added. “Ports are vital international gateways and they will have an important role facilitating our new post-Brexit trade strategy so it is essential that they are well connected to national networks and markets.”

Some winners amid Brexit tumult

It’s not all gloom within the industry, however, with some port operators cashing in on the potential Brexit fallout to lure traffic from its potential victims, notably Dover.

Peel Ports, the UK’s second-largest port operator, is urging shippers and their transporters to consider two potential solutions to “inevitable” congestion at Dover —  adopting the transport model used for Irish Sea freight and using available capacity at other ports around the country.

“The supply chain needs certainty, predictability, and resilience but we all know about the acute delays and problems that already exist at Dover when there is the slightest disruption to normal operations. There’s a growing realization in the whole logistics community that we’re at a tipping point that will force traffic away from the Dover straits,” said Stephen Carr, commercial director at Peel Ports. “Businesses simply can’t take a huge gamble on what the post-Brexit world might look like, especially those with ‘just-in time’ processes or that are shipping perishable goods.”

Currently, more than 75 percent of ro-ro cargo from nearby European ports passes through Dover with about 99 percent of the 4 million units transported by conventional means of a truck driver with a tractor and trailer.

This is in contrast to Irish Sea freight, where more than 50 percent of the cargo is only on trailers. “In this model, goods are held as contingency stocks at the port of entry, with trailers not leaving the port until up to 48 hours after their arrival in some circumstances. Such an approach would provide more time for border checks to take place without the pressure of them needing to be completed during a shortsea crossing or at a congested border point.”

“Cargo owners and their supply chain providers typically need freight units to leave ports immediately on arrival or just 90 minutes after vessel departure from Calais. But there’s no certainty in the industry that this can be achieved reliably post-Brexit,” Carr said.

Shippers can stockpile in UK warehouses to enable them to meet customers’ requirements in the event of delays but this will result in long leases, increased truck/rail mileage, higher handling costs, and damage to goods.

Peel Ports says routing cargo via ports such as London Medway is just as efficient as through Dover and although the sea route from Europe is longer, road mileage is reduced and door-to-door shippers might save money and avoid congestion.