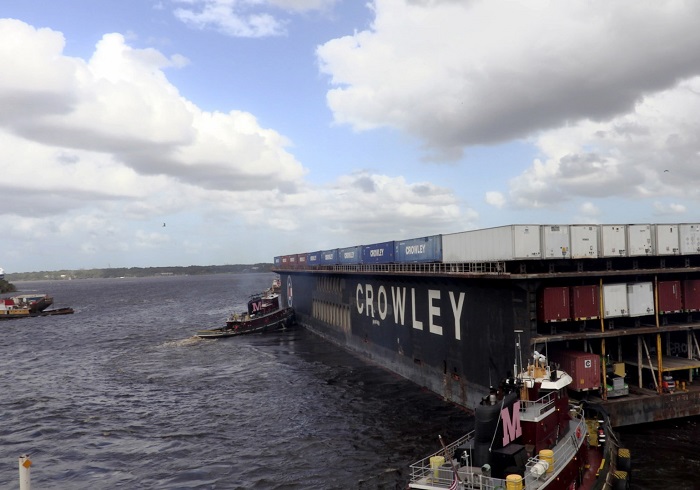 With a quarter of the island’s residents lacking electrical power, long-term improvements are taking a back seat to rebuilding efforts. Photo credit: Crowley Maritime.

Few natural disasters have been as devastating as Hurricane Maria, the Category 5 storm that hit Puerto Rico last September and caused widespread death and destruction before fading from the headlines.

Six months after the storm, work continues to lurch forward on repair and rebuilding of electrical grids and basic infrastructure. However, funding and logistics constraints have dimmed prospects for a surge in project cargo shipments.

Initial post-storm shipments focused on basic relief supplies — food, water, and other necessities, and shipments to rebuild damaged electrical systems. US-flag carriers in the Jones Act domestic trades quickly deployed additional vessels to carry shipments to the island, only to struggle to move them inland amid trucker shortages and damaged roads.

Those shipments have tapered off, and attention is turning toward infrastructure improvements that would require large project cargo movements. But with one-fourth of the island’s residents still lacking electrical power, long-term improvements still take a back seat to rebuilding efforts.

Some without electricity for six months

“Some of those people who have been without power are at the point of desperation,” said Wally Gonzalez, director of government operations at Crowley Maritime’s logistics division. “We now refer to the history of Puerto Rico in two periods — life before the storm, and life after the storm.”

Since the storm, Crowley has delivered more than 6,500 containers of goods related to relief efforts led by the Federal Emergency Management Agency. Crowley also has delivered some 37,000 concrete, wooden, and steel utility poles measuring up to 70 feet long; 7,000 transformers; and 3,500 pieces of other non-containerized cargo, including construction vehicles, utility trucks, generators, and wires and cables.

Crowley recently began transporting to Puerto Rico multiple bridges in sections for roadway reconstruction in Utuado, a region in the mountainous area of La Cordillera Central, where a bridge outage cut off access to the remote community of Rio Abajo. Bridge sections are shipped in 16 to 18 containers and on flatbed trucks. Crowley also has carried an oversize IMT AF-160 drill, a 119,000-pound piece of equipment that is essential for setting the foundation for those bridges.

Foss Maritime recently delivered 498 utility trucks on seven barges to the Port of Ponce in southern Puerto Rico, to support power generation. That shipment, from a coalition of 19 US electrical utilities, included bucket trucks, line trucks, pickups, aerial lifts, and other equipment.

But beyond relief and repair operations, virtually no project cargo shipments have been booked for infrastructure improvements, Gonzalez said. Much of the non-containerized commercial equipment shipped to Puerto Rico these days consists of automobiles.

Project cargo faces several obstacles, led by a shortage of financing for infrastructure improvements that go beyond restoring the island’s infrastructure to its pre-Maria condition. Gonzalez said a few small commercial projects are starting to return, but that materials, warehouses, and labor remain in short supply.

“There is hardly any materials-handling equipment available for hire, and every forklift or crane is tied up in some restoration project, not only for the government side but the commercial side, including every hotel,” said Ayesha Diaz, Crowley’s general manager for warehousing and logistics in Puerto Rico.

Puerto Rico’s economic future, meanwhile, remains clouded. Thousands of workers have left to seek jobs on the US mainland, accelerating a migration that has reduced Puerto Rico’s population from 3.9 million to 3.4 million during the last decade.

The commonwealth already was struggling with high debt before the storm, and Maria’s devastation has further discouraged private or institutional investors from financing long-term initiatives to modernize the island’s outdated infrastructure.

Although the US federal disaster recovery package of $16 billion that was approved on Feb. 9 supports ongoing infrastructure rebuilding efforts, the funds cannot be used for new ventures that might enhance the longer-term prosperity of the island by upgrading roads, bridges, ports, and electricity grids.

Focus Economics, a consultancy that aggregates economic forecasts, expects Puerto Rico’s economy to remain in recession this year. The firm’s panel of economists estimated in February that Puerto Rico’s GNP will contract 4.5 percent in the 2018 fiscal year. The previous month’s forecast had been for a 1.8 percent decline. For fiscal year 2019, GNP is expected to grow only 1.6 percent.

A change in the US tax law has added a new handicap to Puerto Rican manufacturers by imposing a 12.5 percent federal tax on income generated by patents and licenses by foreign companies.

Puerto Rican manufacturers previously paid no federal tax on such patents and licenses. This change leaves Puerto Rico without one of its key mechanisms for maintaining its manufacturing base, which accounts for more than 100,000 jobs and more than 30 percent of the commonwealth government’s revenue.

He noted that manufacturing plants survived Maria in better condition than housing, much of which was poorly constructed, and that ports avoided significant damage. Most plants had backup generators that restored electricity within a few days after the storm.

Masses said he is optimistic the changes will make Puerto Rico’s bloated public sector “smaller and more agile, smarter and more capable — and less expensive. And, so, we will get out of all this crisis with a better community and a more competitive one.”