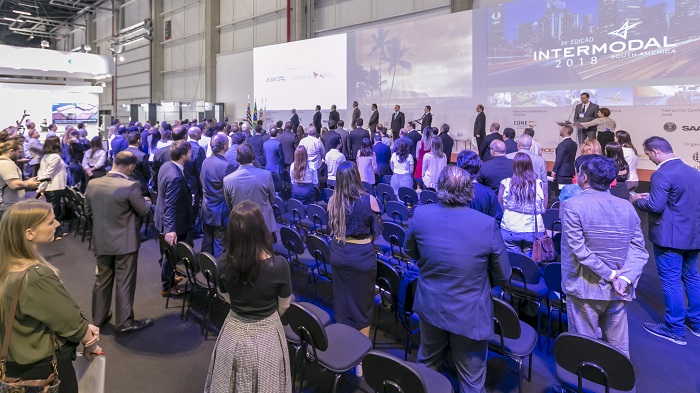 During the first day of Brazil’s Intermodal South America Trade Show 2018, there were several, substantive achievements confirming Brazil Minister of Transport Mauricio Quintella’s statement that billions of dollars of port, railroad, and airport privatizations were back on the agenda.

First, Porto Central, a 3 billion reais ($920 million) development in the south of the southeastern state of Espirito Santo, announced that it had secured the final license — an installation license from environmental agency IBAMA — necessary to start work. The port will feature a 25-meter (82-foot) draft access channel. Terminal operators — containers, general cargo, agri-bulk, and liquid bulk — will have access to 2,000 hectares to build facilities.

“We are considering a period of six months to a year to conclude the commercial negotiations and planning but hope to start building in 2019 and should be operating by 2022,” said Porto Central CEO Jose Maria Vieira Novaes.

Second, a green light was given to Porto Itapoa, the private terminal operated by a consortium that includes Maersk Line/Hamburg Süd. The entity will now build an extension to its container yard in the state of Santa Catarina.

Another project involves investing in the strategic North South Railway (Norte-Sul Ferroviaria), or NSF. In addition, dozens of other terminal operators are now expected to invest billions of dollars in new equipment and expansion plans once they receive contract extensions from Brazil’s federal government.

In addition, Quintella promised that a tender process will be held “in the second semester” of this year for the NSF section between Palmas and Estrela D’Oeste. Once complete, the modernized NSF will revolutionize cargo shipment from the Central-Midwest regions of Brazil. (Inititally, those shipments will consist primarily of soy and agriproducts, but general cargo and containers will follow.) The modernization will substantially reduce cost and transit times for overseas destinations, as shippers will be able to use the cheaper ports in the north of the country (such as Pecem, Belem, Vila do Conde, Itaqui, and Fortaleza) instead of the expensive and congested Port of Santos.

The minister of transport also confirmed that there were some “legal obstacles” halting the extension of existing port concessions, but these would be removed as soon as possible. Under the market-friendly policies of President Michel Temer, the extensions were going to be lengthenened, from 25 years to 35 years, a policy change that is likely now.

Finally, Quintella added that the multi-group negotiations for a new, privatized formula for dredging the Port of Santos was progressing and that once established this formula will be used at other ports throughout Brazil.