Pain — and opportunity — for domestic intermodal amid COVID-19

Pain — and opportunity — for domestic intermodal amid COVID-19 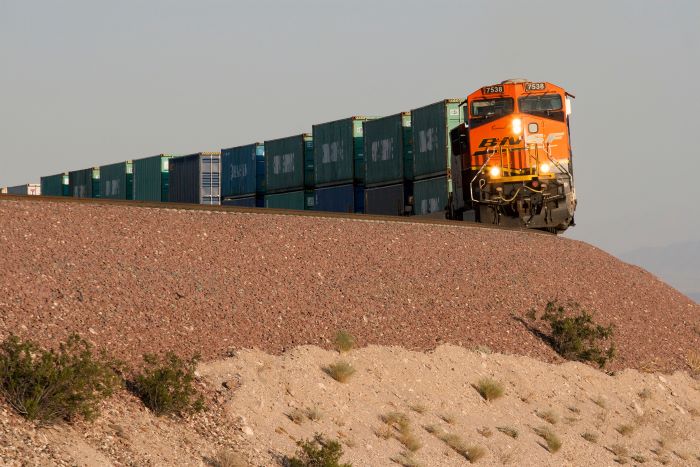 COVID-19 may present an opportunity for domestic intermodal, but it depends on how US Class I railroads react. Photo credit: Shutterstock.com.

It’s going to be a rough one. Similar to a giant ship that has lost all power, the US economy is slowing rapidly, and with it, freight demand. Supply chain participants should be planning for the potential for a crisis that will meet or exceed the downturn seen in the Great Recession.

Yet, using history as a guide, even in a situation as bad as the lockdown due to the coronavirus disease 2019 (COVID-19) pandemic, there may be opportunity for domestic intermodal if the US Class I railroads can seize it — as they did following the Great Recession. But it won’t happen as long as the industry maintains its laser focus on operating ratio.

Take, for example, the journey of a truck load that was highlighted in the New York Times on March 8 in a story titled “Alone on the Road, A Trucker’s Long Haul as America Fights the Virus.” While the piece illuminates the difficulties an owner-operator encountered navigating through the strange new pandemic world and the invaluable service they provide society, the trucker’s 1,079-mile journey provokes questions the shipping industry should be asking: Why are we asking drivers to take these risks? Wouldn’t it have made more sense all around if this load had moved via intermodal?

Of course, the reality is intermodal wasn’t an economic option for this move, at least not now. It’s exactly the kind of long-haul, but hinterland-to-hinterland, load that the newly simplified precision scheduled railroading (PSR)-driven intermodal network can’t support. It won’t move via intermodal because a reasonable service between intermodal terminals that are within striking distance of its origin and destination points does not exist.

Some similarities to Great Recession

The current situation has some similarities, both in the sudden onset and potentially in the duration of the initial event, to the Great Recession. Long-haul trucking volume dropped for three calendar quarters after 2008 Q3, losing about 11 percent before turning back upward. But it took an excruciatingly long 20 calendar quarters before regaining all of the lost ground.

Of course, there are a lot of differences with the current situation. Most importantly, current estimates indicate that the overall slowdown could be significantly more severe in the second quarter of 2020 than was the case during the Great Recession, with some anticipating a drop (remember, annualized) of 30 percent or more. That would be over four times the worst decrease seen in 2008. But helping to offset the carnage will be the federal disaster relief CARES Act which will pump trillions of dollars into the economy. Much will depend on the speed with which the money is disbursed and whether it gets into the hands of those who truly need and will spend it. The other big question, unanswerable at the moment, is how long the acute crisis will last.

But while intermodal transport is a derived demand that depends on the state of the economy, the industry is far from helpless. It won’t have much control over the approximately 60 percent international share of the business. That’s going to be determined by the level of our imports and exports and how they are routed. But the remaining 40 percent is in play.

History says it is indeed possible to wring benefits from such a bad situation. In 2008, domestic intermodal was just entering its golden era of growth as the Great Recession hit. The growth orientation of the railroads and their intermodal partners were a big reason why the sector rebounded so quickly from the downturn. As of the crash in the third quarter of 2008, domestic intermodal held a 5.1 percent share of long-haul truckload moves. Less than two years later, in the second quarter of 2010, the share had jumped almost a full point to 6 percent. That was a remarkable achievement because domestic intermodal had never before reached such levels of share. In subsequent years, although the rate of improvement slowed, market share gains continued. The industry’s performance during the downturn had successfully set the stage for prolonged gains.

The situation is different today. Domestic intermodal has recently lost share. As of the end of last year, domestic intermodal share stood at 6.5 percent of long-haul truckloads, down 0.6 percent from the peak in the second quarter of 2018. The lost volume represents a clear opportunity for share recapture if the industry chooses to do so. An increase of 0.2 percent share per quarter will add over 3 percent growth per quarter, or almost 10 percent by year-end. If the industry could achieve new record levels of domestic share during the Great Recession, shouldn’t it at least be able to recapture recently lost share this time around?

During this looming period of economic stress, price will be king. Capacity will be abundant. Service requirements will be relegated to second place. Shippers will be willing to compromise on speed and relax reliability requirements in order to save a buck. This is where intermodal, with its superior cost structure, can come into play. The key is whether the industry, and primarily the railroads, are willing to make the changes needed in order to get back in the game.

Last year, the rail industry’s focus on maintaining and driving down operating ratio was a significant factor leading to market share loss. Current railroad management seeks ORs in the high 50’s, but domestic intermodal competes in a world where even the best truckload motor carriers can only support ORs in the 80s. For domestic intermodal to achieve the profitability level desired by top rail management, it needs to have a highly selective view of the market.

Such high margins can only be achieved in quite special situations where all the stars align in favor of intermodal. These typically are markets where high point-to-point volumes can be marshalled with little intermediate handling and minimal highway drayage. IPI fits this model well. But you’re going to write off the Richmond-to-Marshalltown moves with this strategy. These hinterland-to-hinterland hauls represent a large piece of the long-haul freight market and their absence from the rail is a big reason that intermodal share is as low as it is.

At the outset of the PSR revolution, advocates held out the potential for a greatly improved merchandise network with block-swapping that could theoretically support a melded intermodal operation. If one can achieve a truly scheduled carload train that operates on a consistent basis, why couldn’t you put a block of intermodal on the train? Wouldn’t it then be possible to put together a low-cost intermodal option for connecting these secondary points via mixed trains, supported by an advanced block-swapping strategy?

Of course, that’s not how PSR has played out thus far. The plan just described would be complex, and PSR is all about simple. But there is another option to tap at least some of this hinterland traffic. By lowering terminal-to-terminal rates, the railroads can extend the radius of the geographic markets that can be economically served by the existing terminal network. The cost of longer-haul drays can be supported while staying below the competitive pricing of door-to-door direct truckload. Lower prices bring more volume, not only because of deeper penetration in the major markets, but also by making at least a portion of the secondary markets intermodal accessible.

Prior to the crisis, such a strategy was apparently off the table. The railroads felt that operating ratio (OR) had to be maintained at all costs because that was what Wall Street was watching. It was (rightly) feared that any deterioration in operating ratio in the quarterly financials would result in quick punishment in the form of lower stock prices. However, since February, railroad stock prices have tanked, sinking over 30% in some instances. How relevant is maintaining the OR in such circumstances? The concern now should be attracting sufficient volume to absorb fixed costs and grow overall profits and return on total investment.

The industry is facing a significant fork in the road. It can double down on the PSR path and cut service and costs further, stack up the empty domestic containers in storage, hold pricing, and try to ride out the storm. In such an instance, the domestic intermodal that emerges at the other end will be a weaker, less relevant presence than it is today.

Alternatively, the industry can lean into the crisis, pivot from focusing on margin to focusing on volume and wring some benefit from this terrible situation by gaining market share. This will put the industry in a better position when we begin to emerge on the other side.