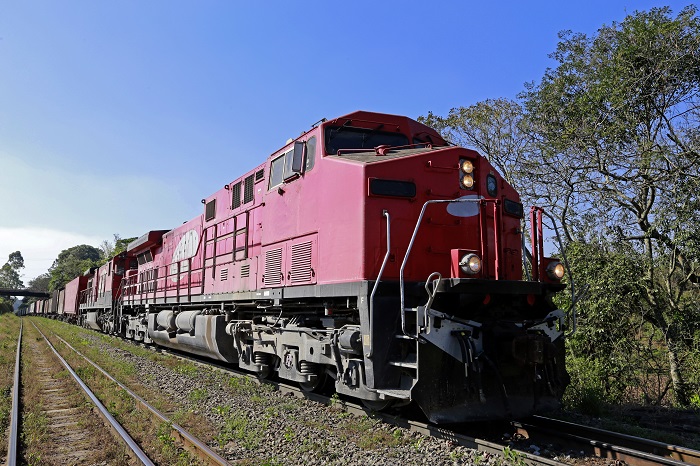 Brazil's over-dependence on road haulage in South America is causing shippers, carriers, and political decision makers to ponder alternatives to the truck. (Above: A freight train with containers travels in Brazil.) Photo credit: Shutterstock.com.

The truckers’ strike that paralyzed Brazil commercial transport last month led to a large increase in containers being transported by rail during the crisis.

What’s more, in retrospect, the incontrovertible over-dependence on road haulage in South America is causing shippers, carriers, and political decision makers to ponder alternatives to the truck.

MRS Logistica, a leading rail operator, said that it had almost doubled its carryings during the bitter dispute — which gripped the nation from May 21 to June 1 — and may reignite if a minimum freight rate deal is not approved by Brasilia; MRS called on shippers to use the railroad more in the future to “reduce their dependence” on trucks.

During the 11-day strike, desperate shippers looked for ways to bypass roadblocks set up by more than 300,000 truck drivers. (About 1 million truck drivers operate in Brazil, of which 700,000 are freelance and members of the main union Abcam.) Some shippers headed for the railroad depots.

MRS Logistica would not provide specific data, citing market competition concerns, but did state that in terms of containers it usually operates at 45 percent to 60 percent of available capacity. However, during the truckers’ strike it was 100 percent full for “every wagon,” and this has largely continued since the strike ended at the beginning of the month. MRS noted that not all new volume was strike-induced: it said some of the extra volume was from companies who were already considering switching from truck to rail.

Further, estimates from other sources suggest that containers handled were up from about 3,000 TEU per week to around 6,000 TEU per week across the following services: Santos-Jundiaí, Santos-Campinas (between the two banks of the port of Santos), Santos-Suzano, Santos-Vale do Paraíba, Santos-São Paulo, Rio-Belo Horizonte, Rio-São Paulo, and Rio-Paraíba Fluminense Valley. Each route operates with an average of two trains per day. The main terminals served directly are DP World Santos and Santos Brasil’s Tecon Santos facility on the left bank of the Port of Santos, and Ecoporto on the right bank. Rail operators (VLI and Brado also operate in Santos) can also deliver containers very close to Grupo Libra, BTP, and Rodrimar, but not inside the terminals themselves. The Port of Santos is South America’s largest port with 3.85 million TEU handled during 2017.

Further, the doubling of cargo figures during the truckers’ strike by MRS is backed up by Contrail Logistica, a railroad terminal operator and services provider, which has as shareholders EDLP (a rail company), BTG Pactual (a major Brazilian investment bank), and Eurogate (the Hamburg box terminal operator).

Contrail’s CEO Rodrigo Paixão was in a very upbeat mood when JOC.com interviewed him Friday and he reported that volumes had “more than doubled” since the start of this year and that Contrail’s service, using MRS Logistica wagons, from Jundiai (where Contrail owns the rail hub) to Santos had been given another boost during the strike, surging from 1,000 TEU per month to 1,200 TEU per week. Also, the number of one-way train journeys had risen from four per week to eight and then 10 per week. Again, the rail uptrend had started before the strike, as a number of new shippers were added to the roster, but then rail volumes hit stratospheric levels during the truckers’ job action, and block trains are still so full that Contrail is now hoping MRS will add more capacity later this year.

“We have seen rapid growth before and during the strike and with logistics chains still recovering we are seeing a lot of bottlenecks at the ports that are impeding the flow of boxes somewhat,” Paixão said. “We don’t know how much of the extra flows are sustainable, but we will try and keep as much as possible. Right now there is a lot of confusion with the arguments about freight rate tables for truck drivers, but in the meantime some shippers are coming to us and other rail providers.”

Paixão said that new shippers from the following sectors had started using rail services: information technology, electronic goods, auto-parts, food and beverages, and cleaning materials. In March, Contrail could call on LG Electronics, Amcor, and GL Foods Worldwide Ltda, Malaverio, the Brazilian confectionary company, as regular customers and they have now added Samsung, among others. Many of the IT and e-commerce companies are shipping products from the Free Trade Zone of Manaus — in the Amazon rainforest/jungle region of Brazil — down to Jundiai for distribution to the São Paulo and Campinas industrial regions, with their huge populations.

Freight rates vary — depending on commodity — but on average Contrail is charging 2,000 reais ($536) to transport a TEU from Santos to Jundiai (about 85 miles away) and the same for the return trip. Paixão said that prior to March the trains were running full from Santos up to Jundiai, but were mostly empty heading south from the plateau.

“We then worked really hard to find new clients to fill the train from Jundiai down to Santos and now we are pretty much full in both directions,” added Paixão. “We effectively doubled our volumes with the same equipment and then came the strike, which meant we had to turn the wagons around even faster to bring the service up to 10 journeys per week, five in each direction.”

Estimates vary, depending on the source and the cargo category, but between 60 percent and 70 percent of Brazilian freight is transported by truck and only 30 percent is moved by rail; the remainder, incremental percentages, are transported via inland waterways and cabotage. However, most rail operators concentrate on dry bulk cargoes, like soybeans, and in terms of containers the percentage carried is more likely between 3 and 4 percent.

Rail gets another boost — from a transportation void

Alan Lear, the operations director for Lachmann Group Terminals, which has a rail terminal in Taubaté (halfway between Rio de Janeiro and Santos) and an inland bonded terminal at São Bernardo Dos Campos (near São Paulo and 25 miles from Santos) said that sometimes positive things can stem from adversity.

“The truckers’ dispute has caused so much disruption to Brazil but, perhaps, if more containers switch to rail then some good will come of it,” Lear told JOC.com. “I have been advocating Brazilian shippers should switch more of their cargoes.” Lear has been an advocate of more rail cargo transport for more than a decade, firstly with Contrail, and then as an independent consultant with Strategy Consulting, but he admits that the rail lobby is pretty small compared with the trucking lobby.

“Despite many declarations from government officials, politicians, and business leaders, the amount of containers moved by railroad is still probably between 2 and 3 percent around the country and at its highest, at around 4 percent through Santos during some months of the year,” Lear said. “I just wish there were more people and more companies flying the flag for railroad as it is cheaper and greener than trucking and gives you an alternative when there are problems on the roads.”

In Brazil this week, Abcam union leaders have been meeting with agri-business leaders and the Temer administration to try and work out a table of freight (ToF) rates that might be acceptable to shippers, truckers, transportation companies, and government bodies. The National Land Transport Agency (ANTT) is tasked with finding a compromise and modus operandi. ANTT was lambasted for the first table because it seemed to deliver everything that was asked for, and more, to Abcam and the truckers, which led to some freight rates trebling and many doubling in cost. This prompted many shippers, especially grain shippers, to refuse to move their cargo, claiming they were losing money with those rates. ANTT was threatened with more than 40 law suits from shippers — claiming it violated contracts. As a result, ANTT published a second ToF with 40 percent reductions from the first ToF, but that angered the truckers, who threatened more strikes/blockades.

As of Friday, ministers in Brazil decided to suspend talks on a new ToF and all interested parties have been invited back next Wednesday to negotiate a new compromise and minimum freight rate table.

In the meantime, rail operators will continue to make hay, while truckers are not shining or even operating at full force.

How to Improve OTIF: 15 Tips for On Time and In Full Delivery
END_OF_DOCUMENT_TOKEN_TO_BE_REPLACED