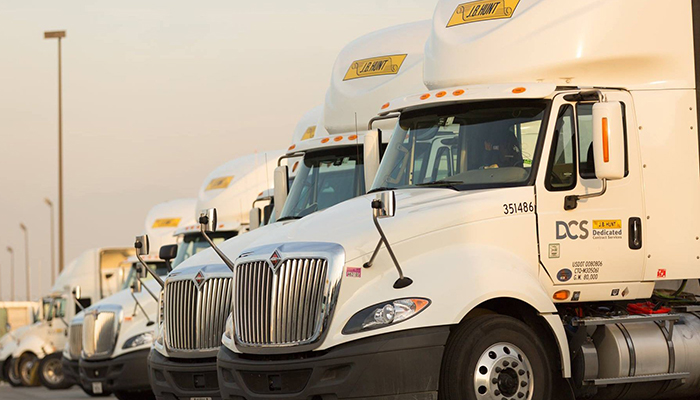 Growth in e-commerce continues to shape the decisions of major transportation companies.

J.B. Hunt Transportation Services’ acquisition of Special Logistics Dedicated that was announced last week will expand the intermodal trucking company’s reach into the so-called “middle mile” with the latter’s e-commerce experience in the delivery of big and bulky cargo.

It is an important note that J.B. Hunt’s first acquisition in recent memory is neither in the first- nor final-mile logistics space, but rather in the middle-mile linehaul move between the port, plant, or warehouse and the distribution center closest to consumers. According to industry analysts, optimizing this often-overlooked leg of the journey should not only make shipping cheaper and more efficient for J.B. Hunt’s customers, but also for J.B. Hunt, which has been coping with rising operating costs.

"This acquisition will allow our customers to deploy 'big and bulky' inventories into key markets, improving order fulfillment times for final-mile deliveries and further enhancing our e-commerce delivery capabilities,” John Roberts, J.B. Hunt's president and CEO, said in a statement.

The $136 million deal announced on July 21 will bring 14 terminals and fulfillment centers and a fleet of more than 850 pieces of equipment into the J.B. Hunt family. That the acquisition is improving J.B. Hunt’s fulfillment of final-mile deliveries, but not expanding its footprint in the final-mile delivery space is significant, said Satish Jindel, president of transportation research firm SJ Consulting Group.

“There is a huge media attention and talk about first and last mile, but [Special Logistics Dedicated] isn’t a company that does either,” Jindel told JOC.com. “This is middle mile, moving stuff between cities before it goes out to delivery to consumers.”

With the advent of e-commerce, transportation providers have expanded in first- and final-mile logistics spaces while “ignoring” the middle mile, said Jindel.

Earlier this year, XPO Logistics doubled its last-mile logistics distribution space in Chicago as demand for bulkier items surges among online shoppers. The logistics and transportation company expanded its last-mile “market delivery center” in Bolingbrook, Illinois, from 50,000 to 100,000 sq ft. And in June 2016 Schneider National acquired trucking company Watkins & Shepard and technology firm Lodeso, deals that gave Schneider a stronger footing in the delivery of heavy goods, but primarily in the last-mile space.

“The trucking companies, they have never embraced it, middle mile,” Jindel said.

As a result, he said, the middle mile became dominated by freight brokers and third-party logistic providers that can charge costly fees for paperwork and phone calls to arrange deliveries. And, as a result of that, operating costs have soared.

J.B. Hunt’s total operating profit in the second quarter dropped 7 percent to $164 million as operating costs rose. Exercising some control over those operating costs could save J.B. Hunt, and by extension its customers, some considerable expenses, said Jindel. Not by expanding into new territory, he said, but rather by “recovering” and “reclaiming” the middle ground.

The $136 million deal may seem relatively insignificant for a company J.B. Hunt’s size, worth roughly $6.6 billion and the fourth-largest US trucking operator. According to industry analysts, however, for a company like J.B. Hunt that has relied on organic growth in recent years, an acquisition demonstrates the company’s commitment to the technology, infrastructure, and knowhow needed to serve customers in a changing marketplace.

E-commerce has driven that change, analysts told JOC.com. Customers are buying bigger items online, and expecting those items to be delivered in less time.

“They are doing the acquisition to improve their ability to offer pool distribution services for retailers and last-mile delivery services for customers that wish to move larger items into position for rapid order fulfillment,” said John Larkin, who heads the transportation practice at investment bank Stifel.

The delivery of bulky goods to consumers’ homes has become the front line in the battle for e-commerce freight. Consumers increasingly are ordering items such as gun safes, televisions, appliances, and exercise equipment online and clicking the “home delivery” option on their screens. It has pushed e-commerce spending up 15 percent in the United States last year to $394.9 billion, according to the US Census Bureau.

Consumers, especially millennials, are getting more comfortable buying large goods online, said Jindel. “They used to want to feel it, feel how comfortable it is, test the quality. Think mattresses. Now people are ordering mattresses online.”