Hub Group is No. 22 on the JOC’s list of Top 40 Global 3PLs, compiled by SJ Consulting, with $3.4 billion in revenue in 2013 earned through its drayage, highway, and intermodal transport solutions. Hub Group’s 2013 revenues were up 8 percent from the previous year’s $3.1 billion. 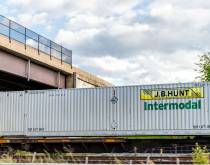 ‘Too early’ to discuss 2023 rail contracts: Hub, Schneider
28 Oct 2022
Hub Group and Schneider National sidestepped questions about intermodal contracts for 2023, a far different approach than the two companies took a year ago when the pricing power was on their side.

Shippers face higher rates linked to UP realignment in Northern California
15 Jul 2022
Union Pacific is temporarily shifting some domestic intermodal traffic from Lathrop to Oakland, a move that may present opportunities for BNSF and the truckload sector to capture market share on routes to the Gulf Coast and Southeast.

Disruption forcing US importers to take greater control of landside logistics
02 Mar 2022
As container lines pull back on inland point intermodal (IPI), US importers are rethinking their landside delivery plans and containerized freight is moving further inland before being deconsolidated.

Rails, trucking hauling light this US peak season
11 Nov 2019
In the heart of what is supposed to be peak season, rail container traffic is not only much slower than a year ago, but also behind 2017 levels as well — and truck seems sluggish, too.

IMCs don't expect intermodal rebound until H2 2020
31 Oct 2019
Top intermodal providers had few positives in describing the current state of the market with little to no seasonal uptick in container volumes on rail.

US imports, truck rates propel intermodal rail volume, pricing
01 Nov 2017
As intermodal rail container and trailer volumes hit historic highs, pressure, that may lift pricing in 2018 and beyond, is building.

Labor activism challenges dominant drayage business model
17 Feb 2016
The recent decision by Hub Group to discontinue its employee-based drayage operation in Southern California is the latest event in a tug of war between the independent contractor model of trucking and the employee model that is likely to continue for some time to come and the result will impact costs for shippers.